A Different Side To Travel: A Journey Through Yemen 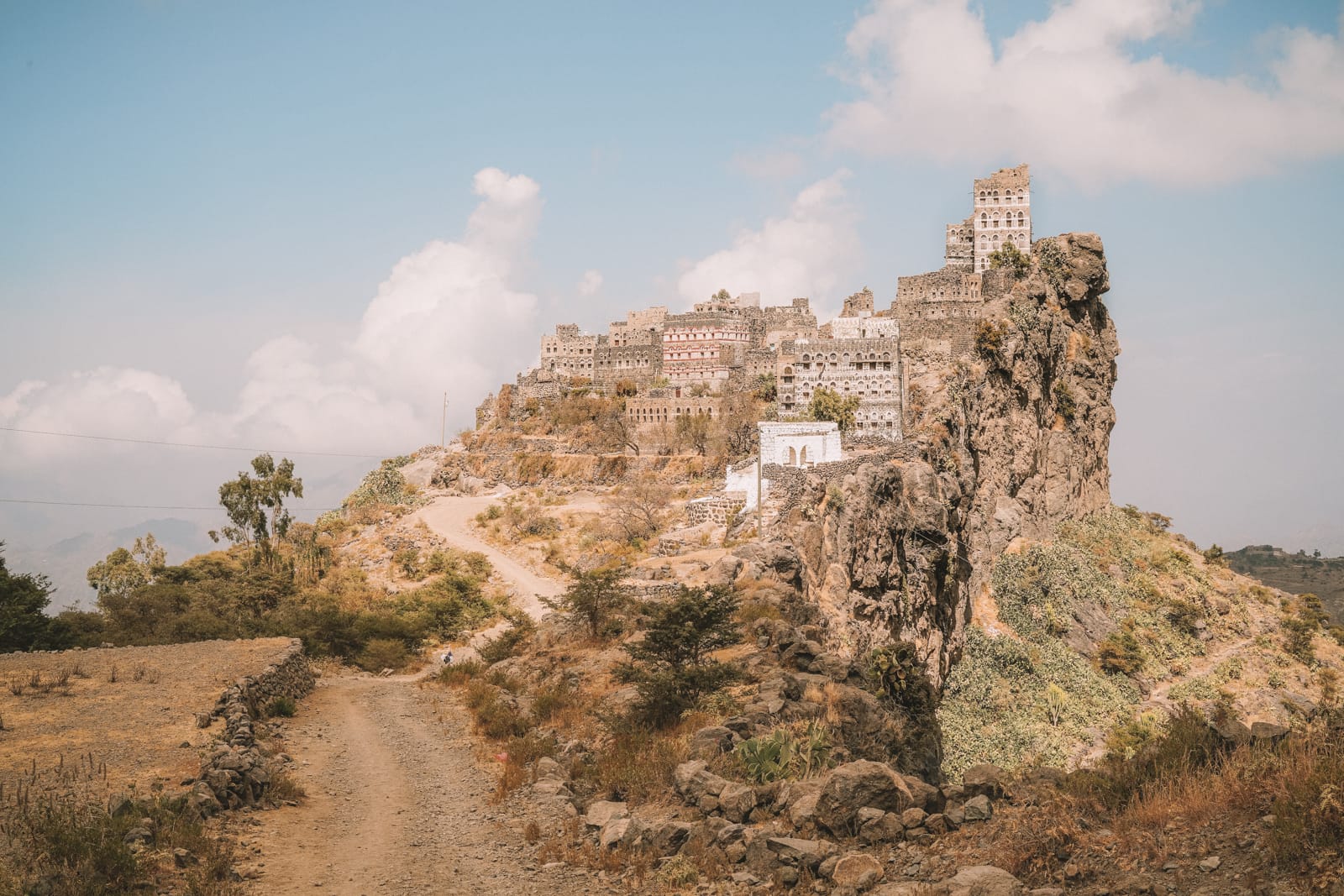 For us, travel is all about experiences and seeing the world around you. Without sounding too cheesy, travel is something that opens your mind, makes you appreciate difference and really value cultures and new landscapes that you’d never interacted with before. At its core, that’s what makes travel so incredible – it’s ability to open your mind.

As you know, we love sharing our experiences but sometimes there are experiences that we know we’d never have done ourselves. You might remember a while back that we featured an amazing account of Stephen’s from the Uncharted Backpacker who travelled across Afghanistan? Well, Stephen popped us a message recently and mentioned he’d just got back from Yemen.

It’s a place, If I’m honest I’ve never even considered visiting, nor would do in the near future with the FCO advice warning against travel. In fact, following FCO advice, I’d always warn others not to travel to Yemen in the current climate. It’s just far too unsafe. 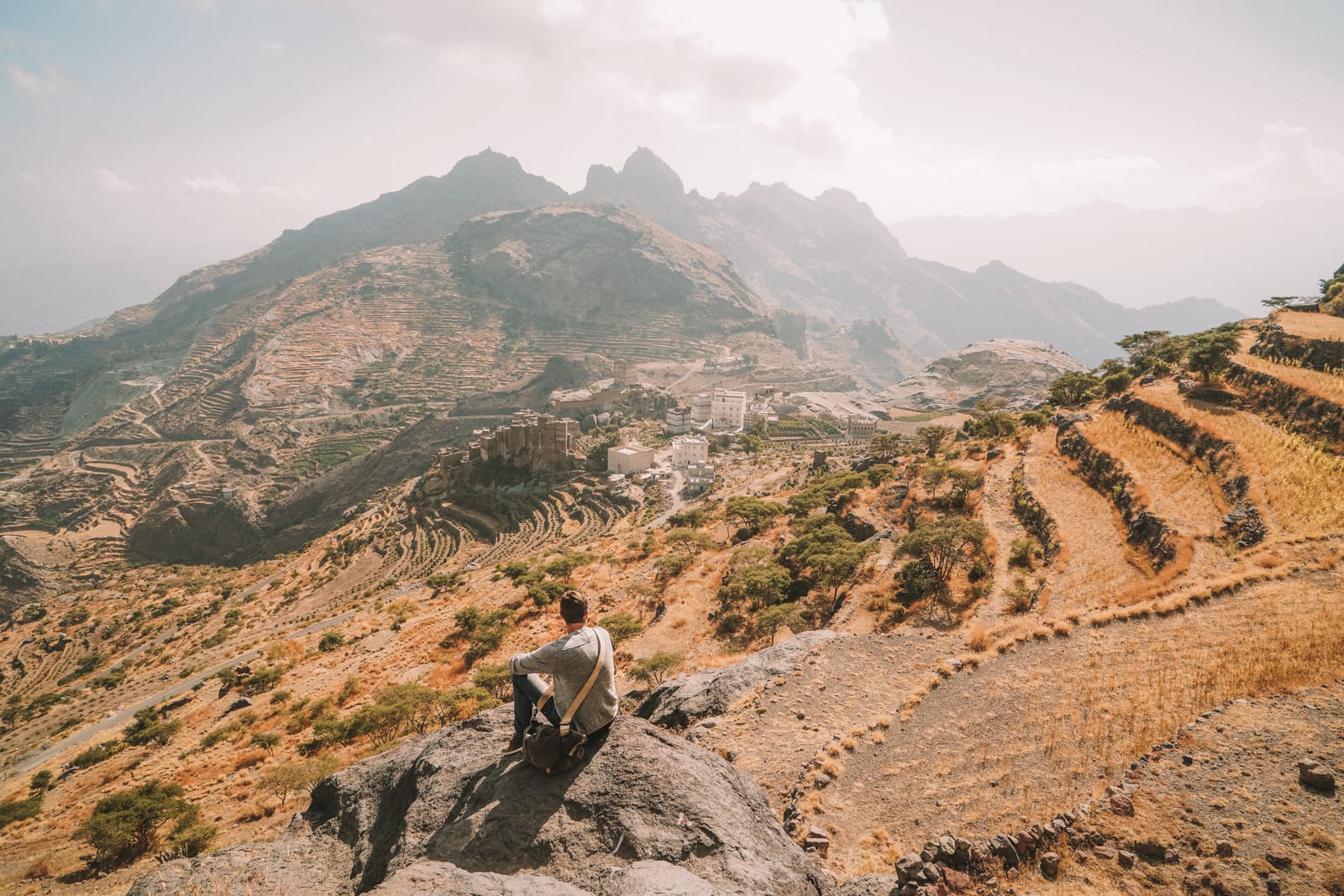 That being said, Stephen went off on his adventure through Yemen and it’s something we just had to share.

His account is tough and some of the things he saw sound terrifying but it’s an experience that most of us will probably never get to have (me included).

You see, it feeds back into that whole idea that travel opens your mind… and that’s why we knew we had to share Stephen’s account on travelling through Yemen.

From the first moment I saw an image of Sana’a, I have dreamt of going to Yemen. Since 2011, during the Arab Spring, Yemen has, unfortunately, been plagued with political unrest. Now, with civil war ravaging the country, Yemen has become a destination that is thought to be impossible to visit as a tourist. 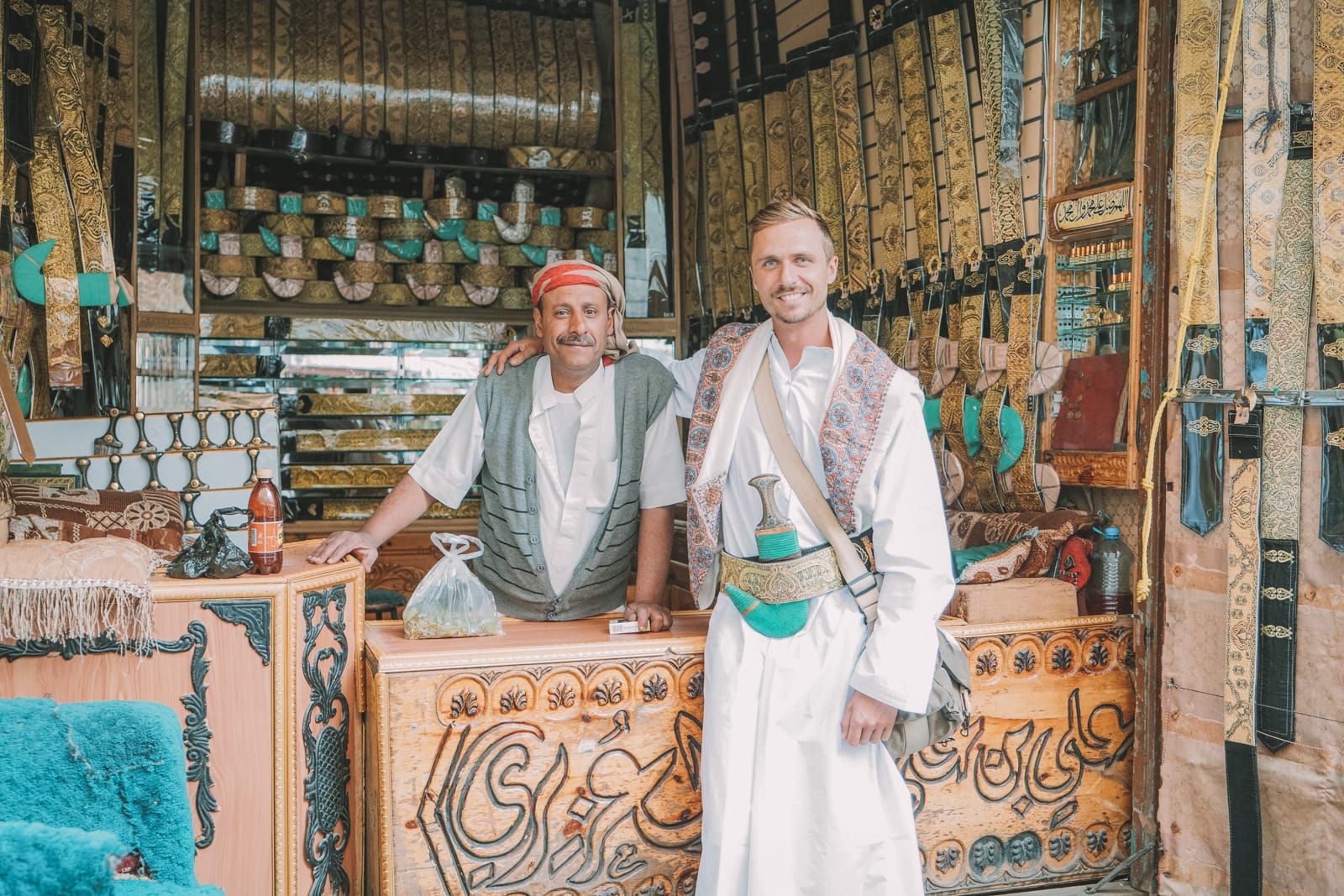 In late 2017, after countless hours of research and frustration, I finally decided to visit Yemen in the height of its war. After travelling Oman for three weeks, I sat in the city of Salalah, the capital of Oman’s Dhofar region, carefully watching the news on Yemen.

I was preparing to cross the border. On the very day I was to cross, the Coalition, backed by Saud Arabia, enforced a blockade, closing all borders. This would not stop my journey, however. I made it through. My fixer waited at the border for me. The following is my journey through Yemen!

Shibam and the Valleys of Hadhramaut 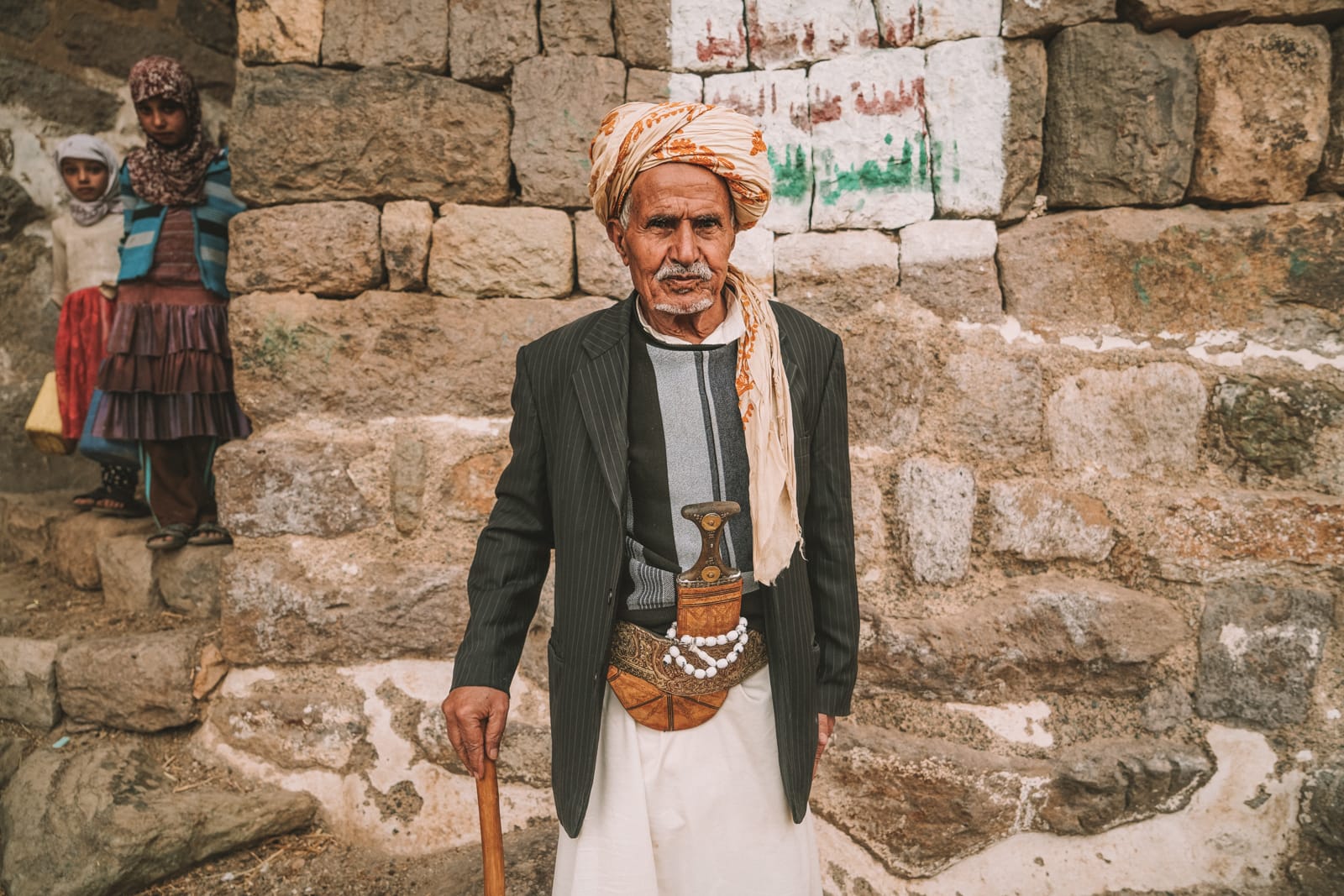 From the Northern border with Oman, you cross into Yemen’s Hadhramaut region. It takes about four hours of driving through the featureless sands of the Empty Quarter to reach your destination. Crossing the Oman side is straightforward, the Yemen side is another story.

The buildings have been destroyed and people live in a mess of barbed wire and metal sheets. Many men wearing regular clothing carry very heavy weapons and looked battle hardened.

After crossing the border, it takes another long eight hours of travelling through the Empty Quarter before you arrive to Seiyun, the capital city of the region. This entire region is controlled by the coalition forces. Most of the checkpoints are enforced by the Saudis and Emirati. The drive time seems endless because of security checks.

The next day, I got my first real taste of Yemen. We drove to Wadi Dawan, a stunning hilltop community of mudbrick houses that cling to the sides of sheer cliff faces. Nearby are also lush oasis towns where all sorts of fruits and nuts grow. Yemeni farm life is fascinating. The women cover themselves from head to toe in black garments and wear a tall, pointed, yellow hats. 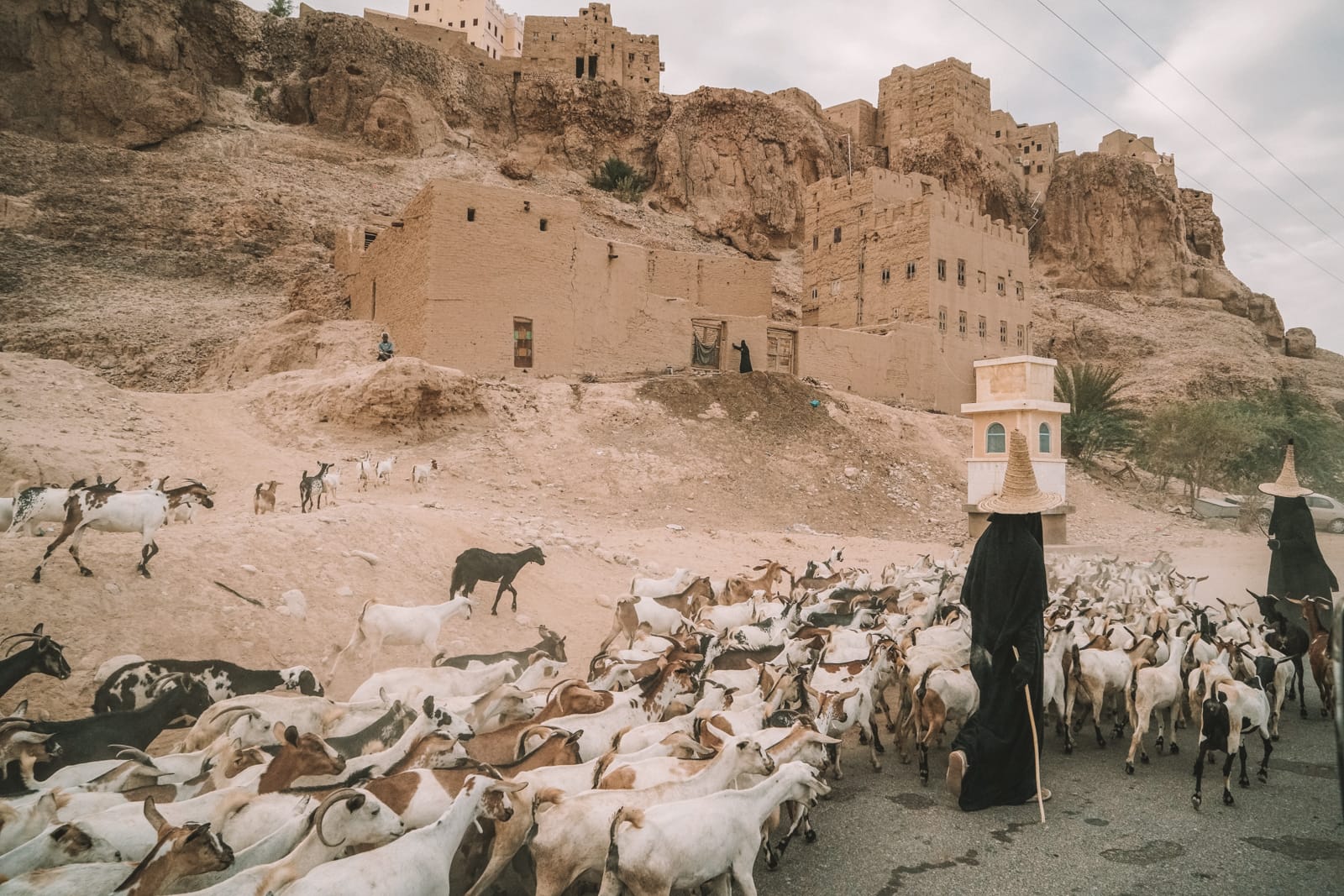 The real draw for coming to Hadramaut is the legendary city of Shibam. Dubbed the Manhattan of Arabia, this ancient city has mud buildings that stand well over seven stories high. It’s a sort of “living museum.”

Since ancient times, people have lived and still live in these massive structures. Wandering the streets of Shibam, it’s hard not to look up at the colourful mud walls, and ornate wooden windows.

The Ancient Kingdoms of Marib 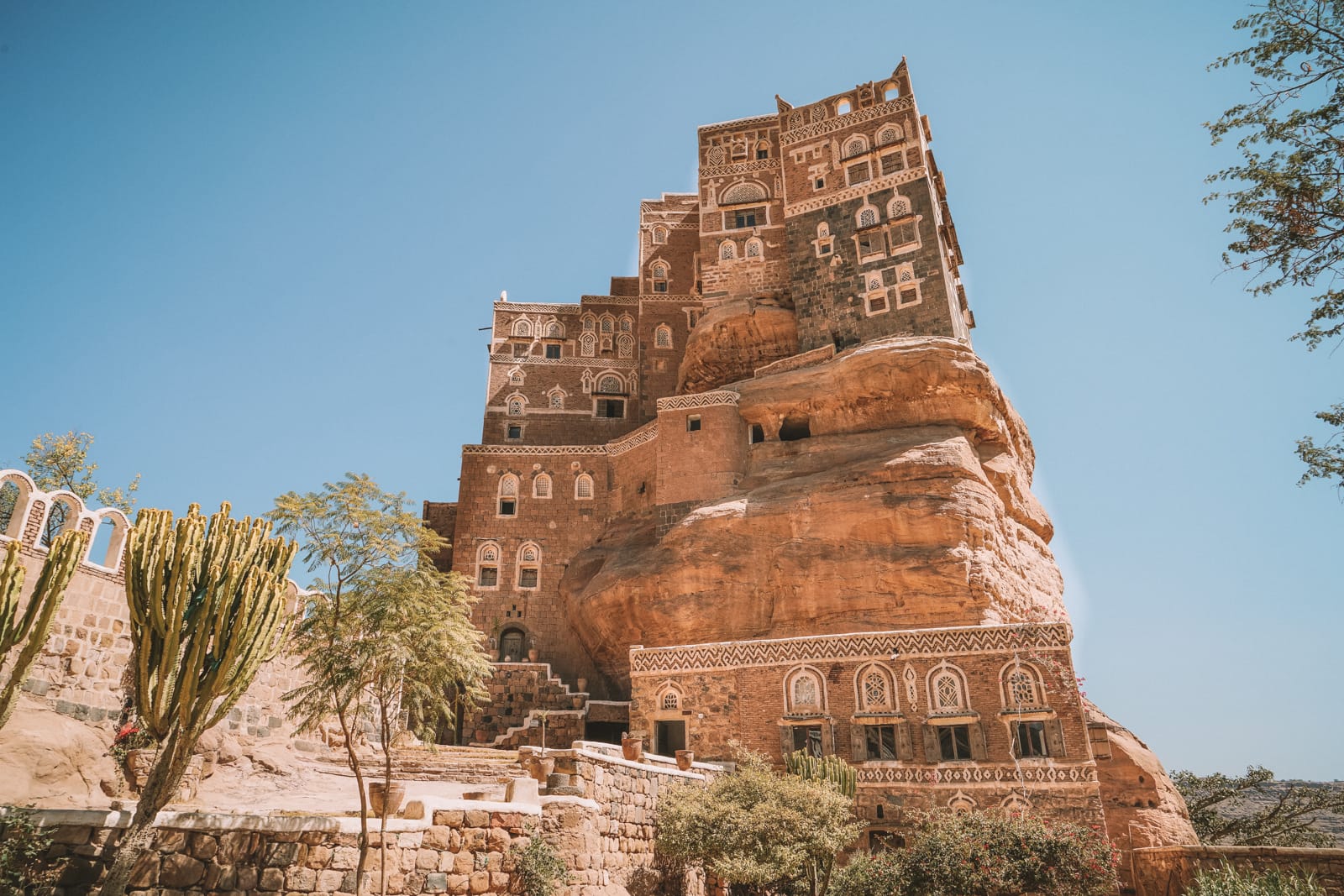 In the past, if you mentioned Marib, travellers would conjure images of lost cities buried in the sand, Bedouin tribes living in even the most inhospitable areas, and some of Yemen’s most beautiful natural scenery.

These days it is the front line. It’s the area where Al-Queada and ISIS carry out their attacks, and where the Coalition and Houthi forces battle each other. It’s a grim scene, but an essential stop on my Yemen journey.

From Seiyun, the road to Marib crosses some of Yemen’s harshest desert regions. The sands blow across the road, the heat warps your vision, and apart from the odd lone camel, there is not much life here. The closer to Marib Town you get, tall rocky peaks begin to break through the desert mirages.

Stopping to fuel up at the random stations in the desert, we saw ISIS fighters with flags, government troops guarding the pumps at gunpoint, and random trucks filled with armed men. This is defiantly the wild west of Yemen. 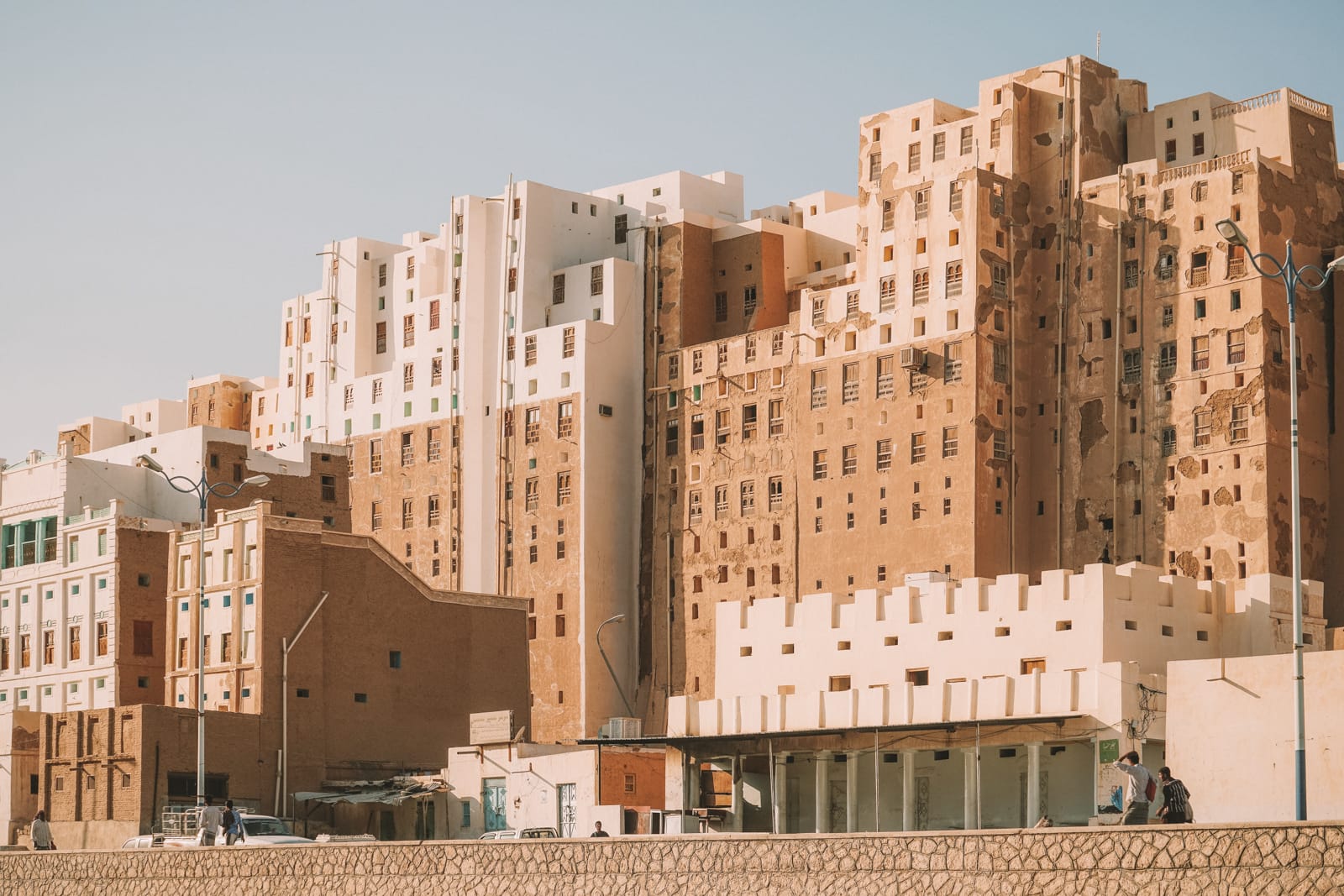 Upon arriving in Marib, my fixer brought us to his friends who happened to be a Bedouin tribe. Their compound family residences were heavily guarded so it felt safe. We chewed Khat for hours with them, playing dress up with the Yemeni outfits and shooting off a few rounds from their machine guns.

The next day we visited some of the ancient sites around Marib. These ancient Sabaean kingdom temples are half buried in the sand. Archaeologists began excavations but, due to civil unrest, never got to finish uncovering what lies beneath the desert.

Not many foreigners have laid eyes upon these ancient structures for many years. 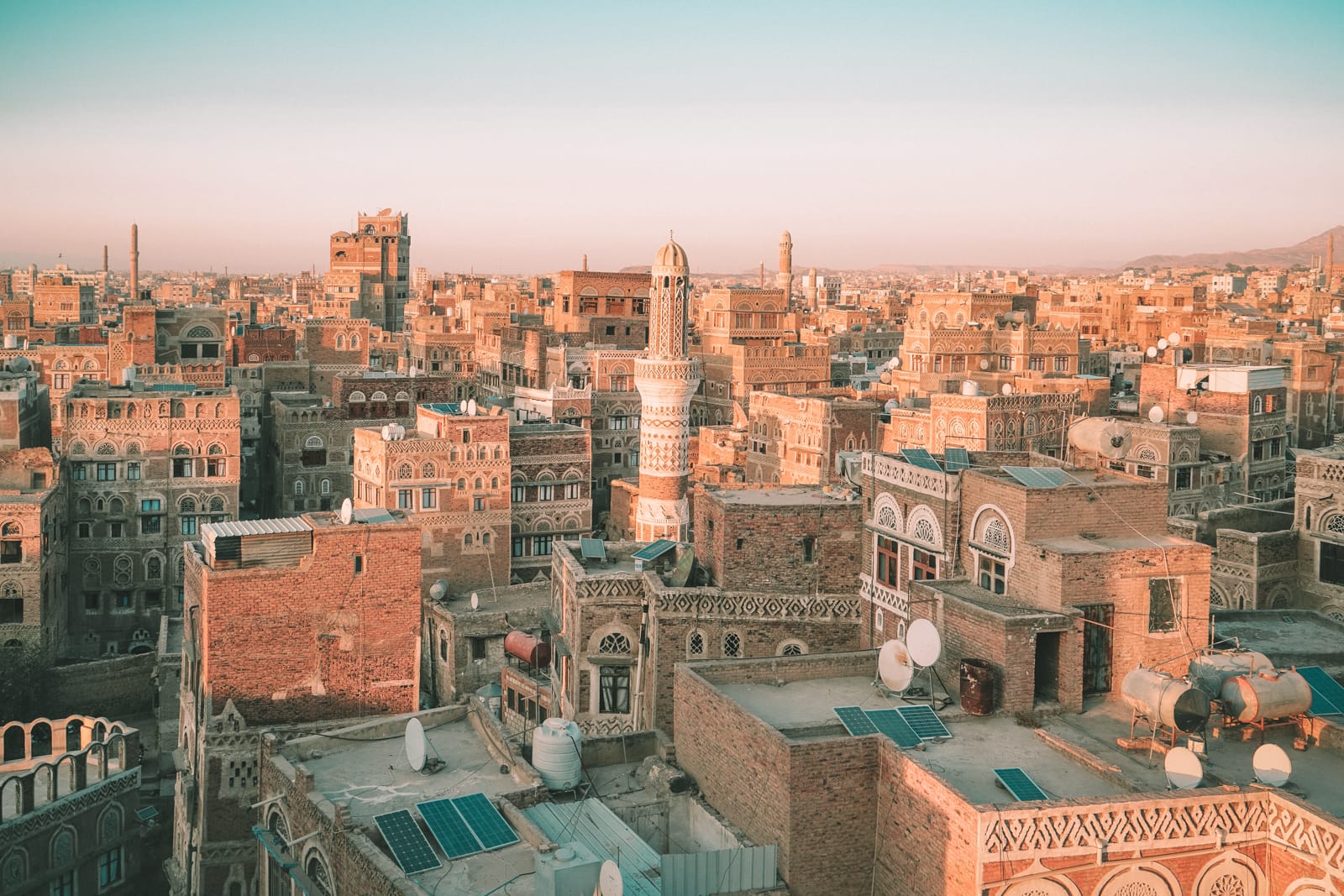 The highway from Marib to Sana’a has been closed for years as this is the front line between Houthi and Coalition borders. Normally, a journey that would only take a few hours, now takes upwards of ten hours. This is because the only way to get to Sana’a from Marib is to take the remote mountain passes into Rada’a. Rada’a is, unfortunately, another area plagued by terrorist organizations and instability.

The mountain road was very sketchy. You could see snipers in the hills, and the front lines had artillery and tanks. Crossing into Houthi territory, there was a ramshackle post. The soldiers were very young and looked the rebel part, sporting headbands and mismatched camouflage.

When We finally arrived in Sana’a we were exhausted. We passed through well over forty checkpoints, some very dodgy areas, and at one point our spare gas can spilt over the front of the 4×4. Eventually, we arrived at our driver’s house in the old city where we would be staying. 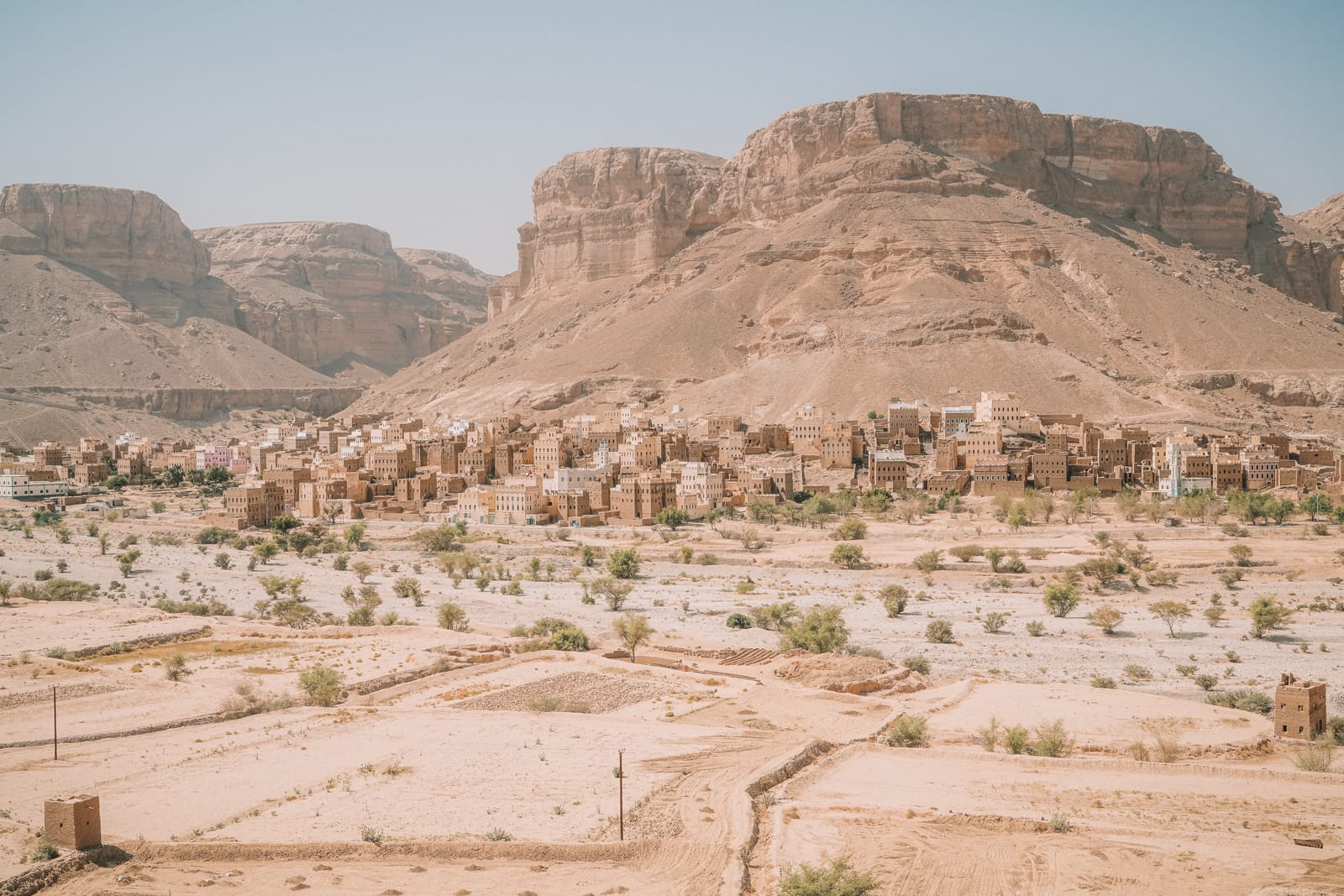 Waking up to the call to prayer in Sanaa’s old city was beautiful. We climbed to the top of our driver’s house to witness all the nearby minarets singing over this incredible city. We explored the markets in Sana’a in the morning. I bought myself a Jambiyah Yemeni traditional knife. Every man here wears one.

Sanaa’s Old City is unlike anywhere I have ever been. The narrow streets are lined with shops selling knives, spices, hand banged copper pots and much more, just as they have for centuries. All the buildings are built in the traditional manner of mudbrick and white, chalk lined windows. Around you, the locals all wear traditional Yemeni outfits. The whole scene takes you back in time to the old Arabia.

In the evenings we visited many different Yemeni households, all friends of our fixer, Fuad. Here we conversed about Yemeni culture and the war while chewing Khat and drinking tea. The hospitality we received here was unmatched to any destination I have ever been.

The next few days we explored Sana’a and the outlying area. In the north is the stone castle, a tall Yemeni style palace that seems to be defying gravity by balancing on a skinny rock. About one hours’ drive from Sana’a is Kaukabam, a city completely built of stone, that is located atop a very tall mountain. Here you can see Yemen’s stunning mountain valleys. Unfortunately, much of this area has been devastated by airstrikes from the war.

Manakha and the Haraz Mountains 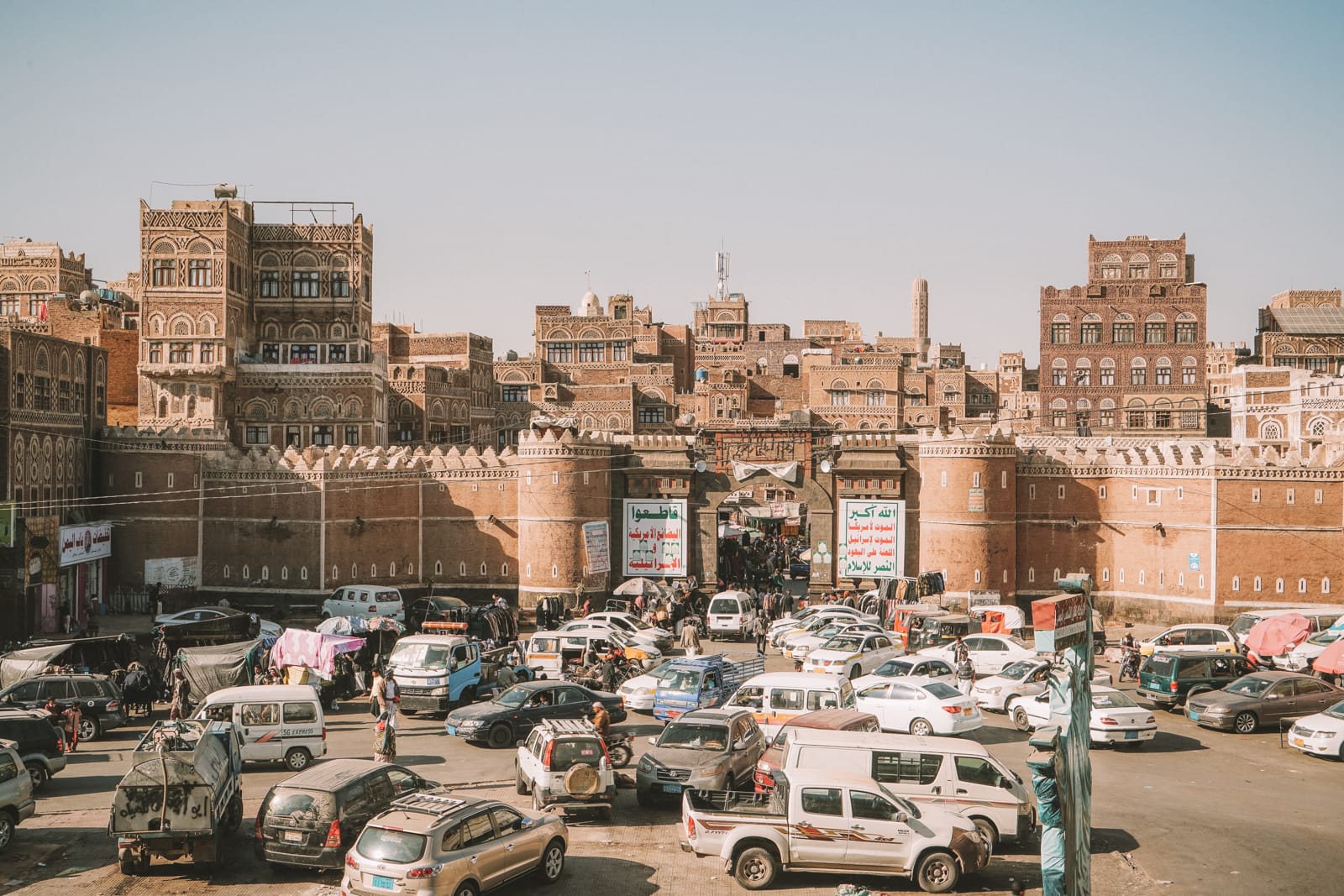 From Sana’a our next stop was the Haraz Mountains. Located just west of the capital, these mountains are famed for their medieval fortified villages that sit high above on plateaus. This corner of Yemen is also one of the most traditional areas. It’s very rare to see western clothing, and there are absolutely no western restaurants or five-star hotels. It really is a traveller’s paradise.

The twisting road from Sana’a snakes up to Manakha through the jagged Haraz peaks. After three hours of driving, you climb high above the clouds and start to spot the walls of the fortified villages. The scenery grows more mind-blowing the higher you climb.

We stopped for two days in Manakha staying with a family that our fixer Fuad knew very well. One of the older sons took us hiking into the mountains, visiting plenty of small villages and terraced fields. Often we were invited in by farmers and given tea and bread with yoghurt. Hiking in Haraz was one of the biggest highlights of Yemen for me! 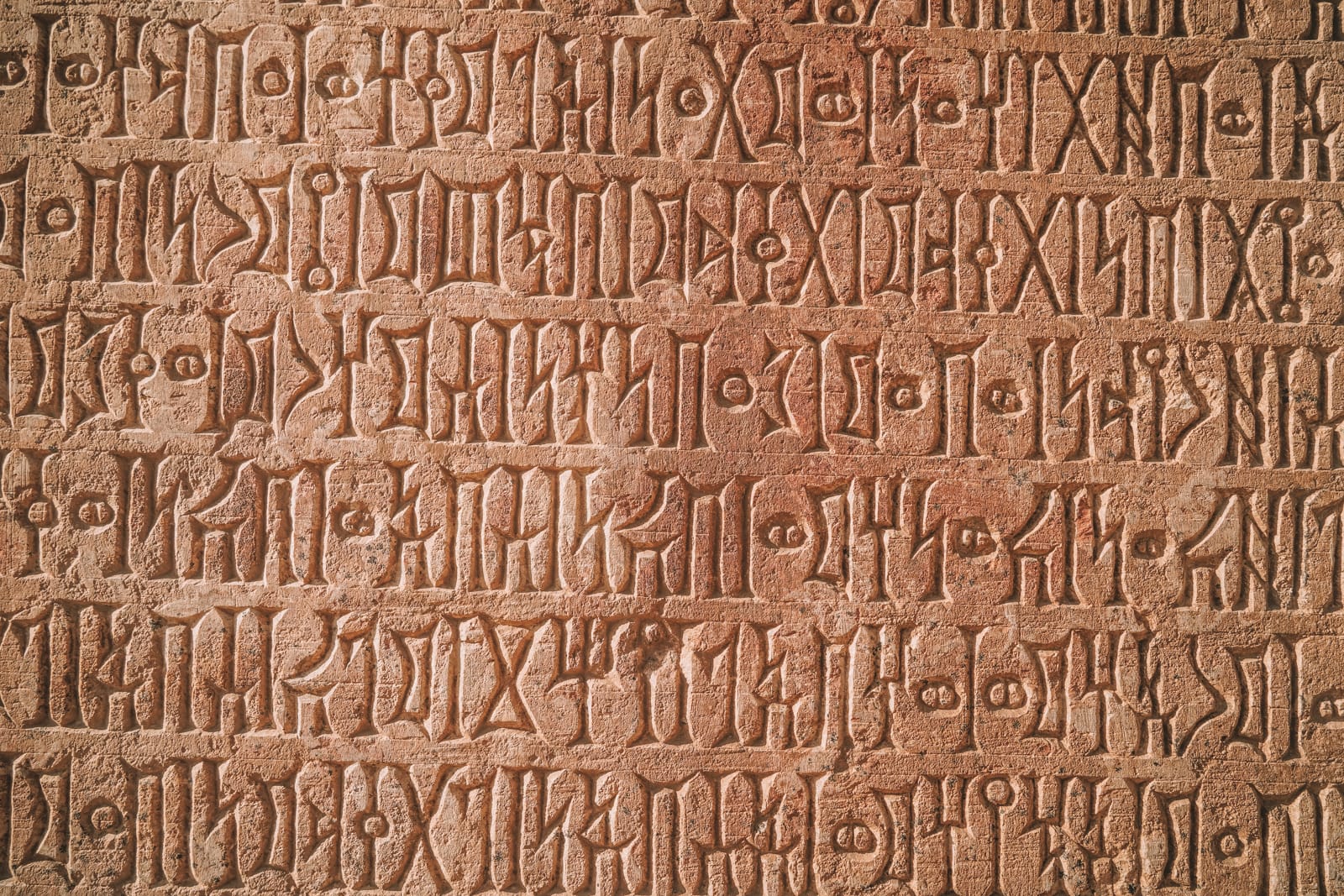 From Manakha we drove further into the Haraz to Al Mahwit. Al Mahwit is another mountain city that resembles Manakha, but is more developed. The terraces in the nearby villages here drop down hundreds of meters.

After a week in the Haraz, we drove back down to Sana’a. A few days later the fighting broke out. The coup between Abdul Saleh and the Houthi brought intense fighting and trapped us in Sana’a.

Travelling Through the War in Yemen 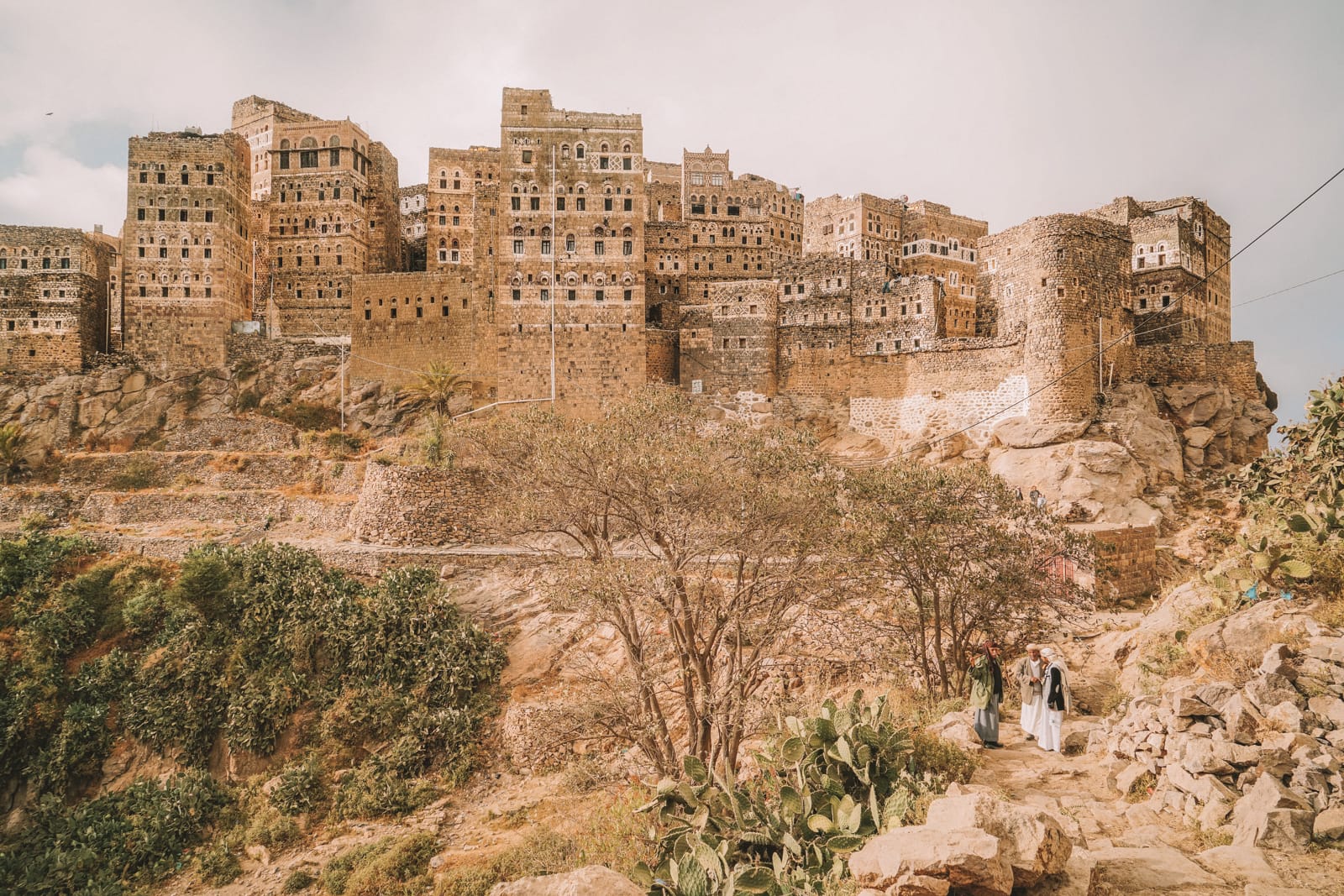 Yemen is an amazing country to say the least. Before the war, it saw much tourism, and I can assure you after the war it will as well. Unfortunately, the current situation has made conventional travel and tourism here impossible. Visiting Yemen currently requires special permits and requires taking many risks.

I decided to travel Yemen to promote the country’s culture, people, and historical sites. Often, in times of war, people only see the negative in a country. During my travels, I witnessed airstrikes, serious humanitarian issues, a full-scale war, and was arrested for eight days under suspicion of being a spy. For me, the most important thing I saw was the hearts and courage of the Yemeni people. Regardless of how bad this war gets, the people of Yemen will not give up. Their optimism is what I loved most about them.

Even though Yemen is not ready for tourism at this moment, use this post to prepare for a trip there in the future. I can promise you that Yemen’s situation will improve, and tourism will flourish once again, just as it did before. Yemen, you are amazing! 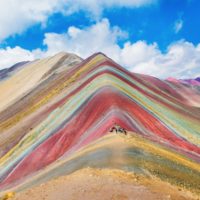 The 12 Best Hikes In Peru You Have To Do 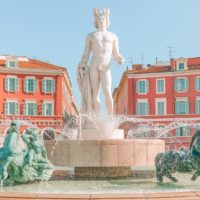 10 Of The Best Things To Do In Nice, France 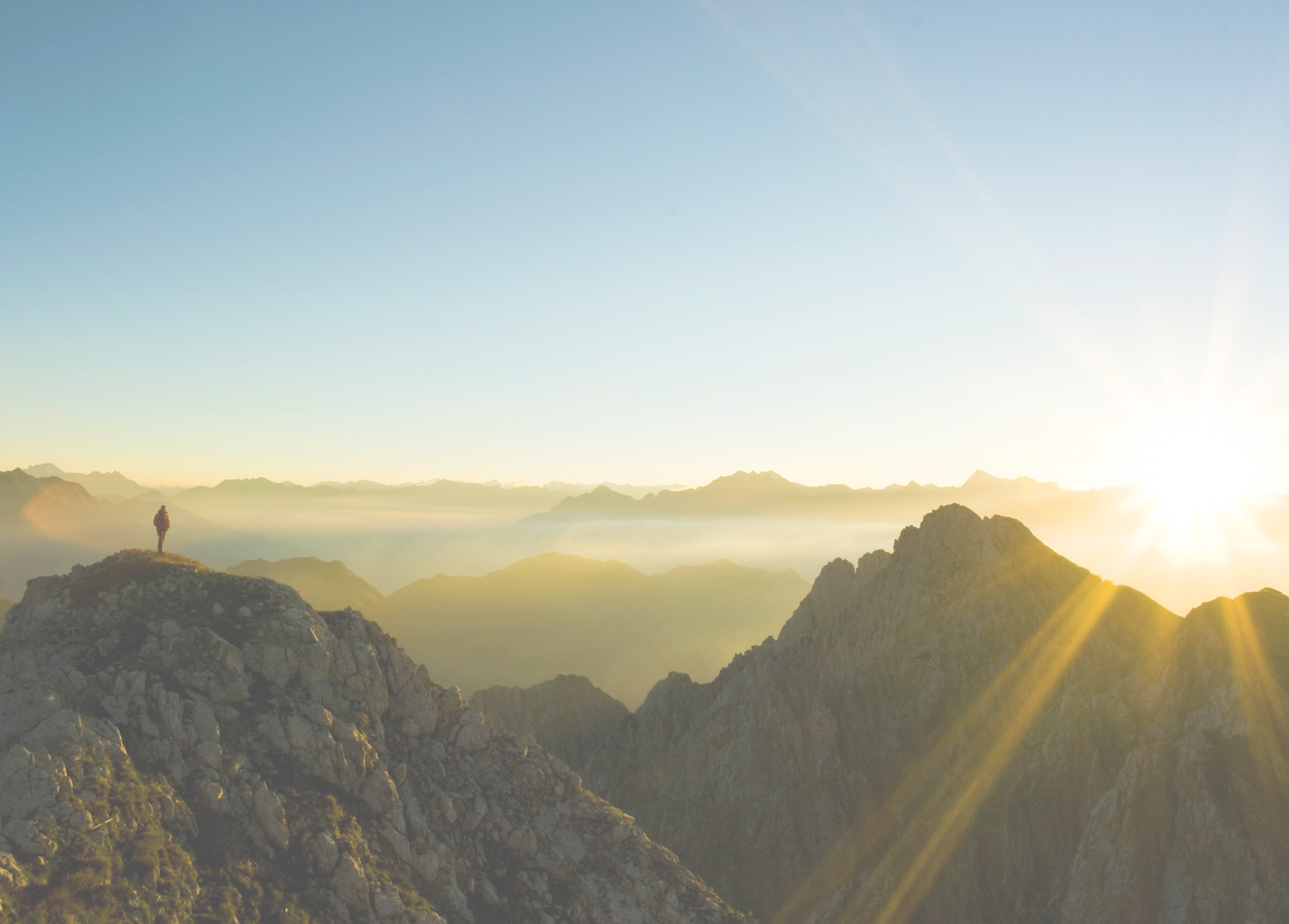 9 Ways To Help You Move To A Different Country 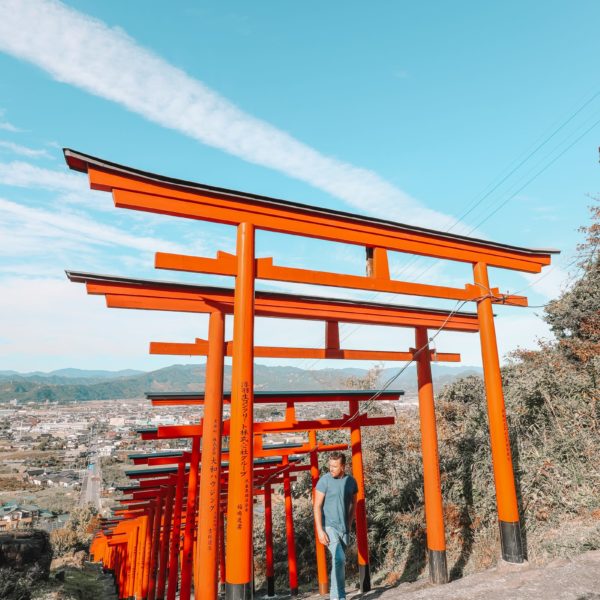 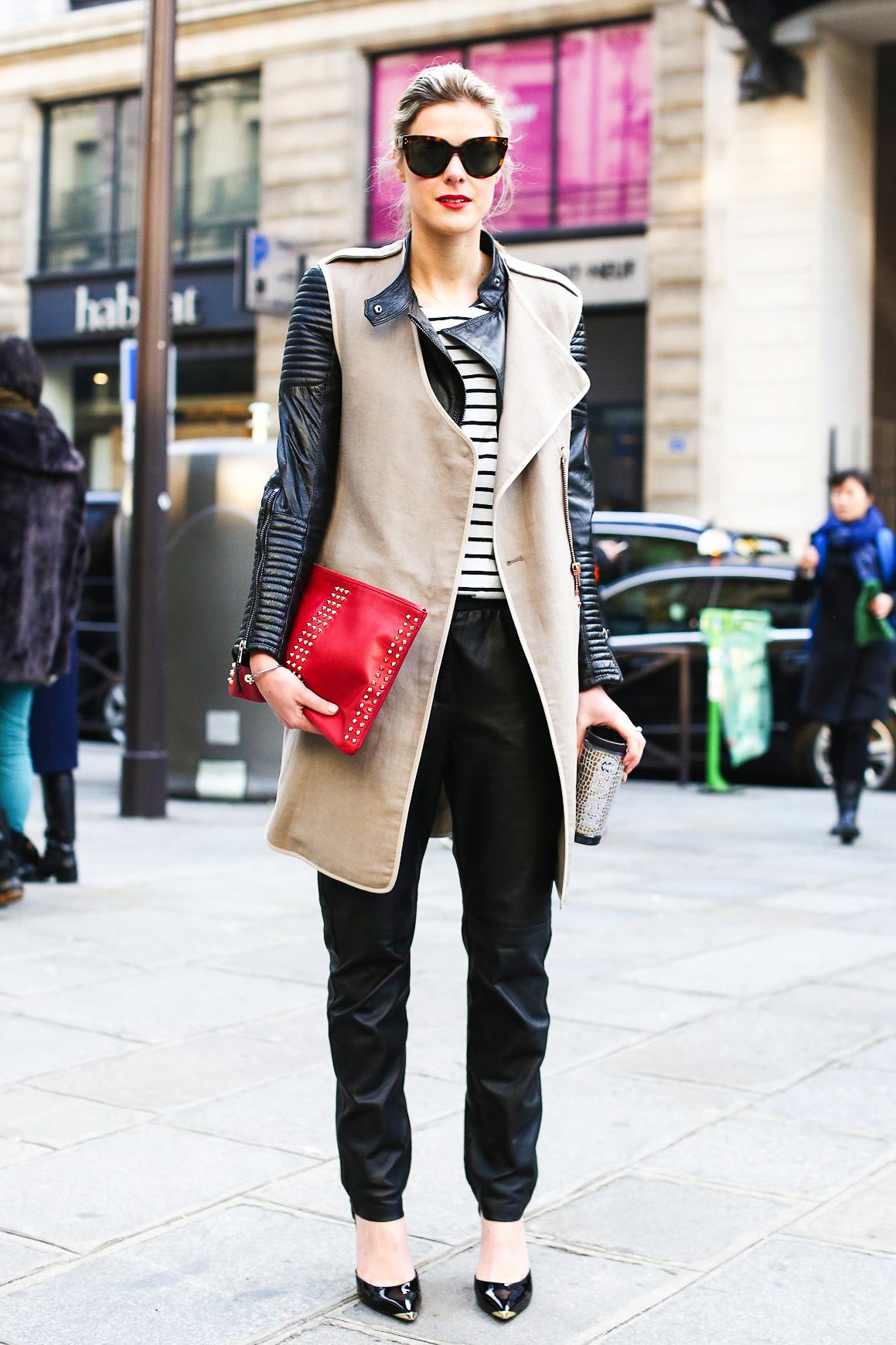 4 Incredibly Stylish Winter Travel Outfits And How To Get Them For Less Than £50!