12 Of The Best Things To Do In Memphis, Tennessee 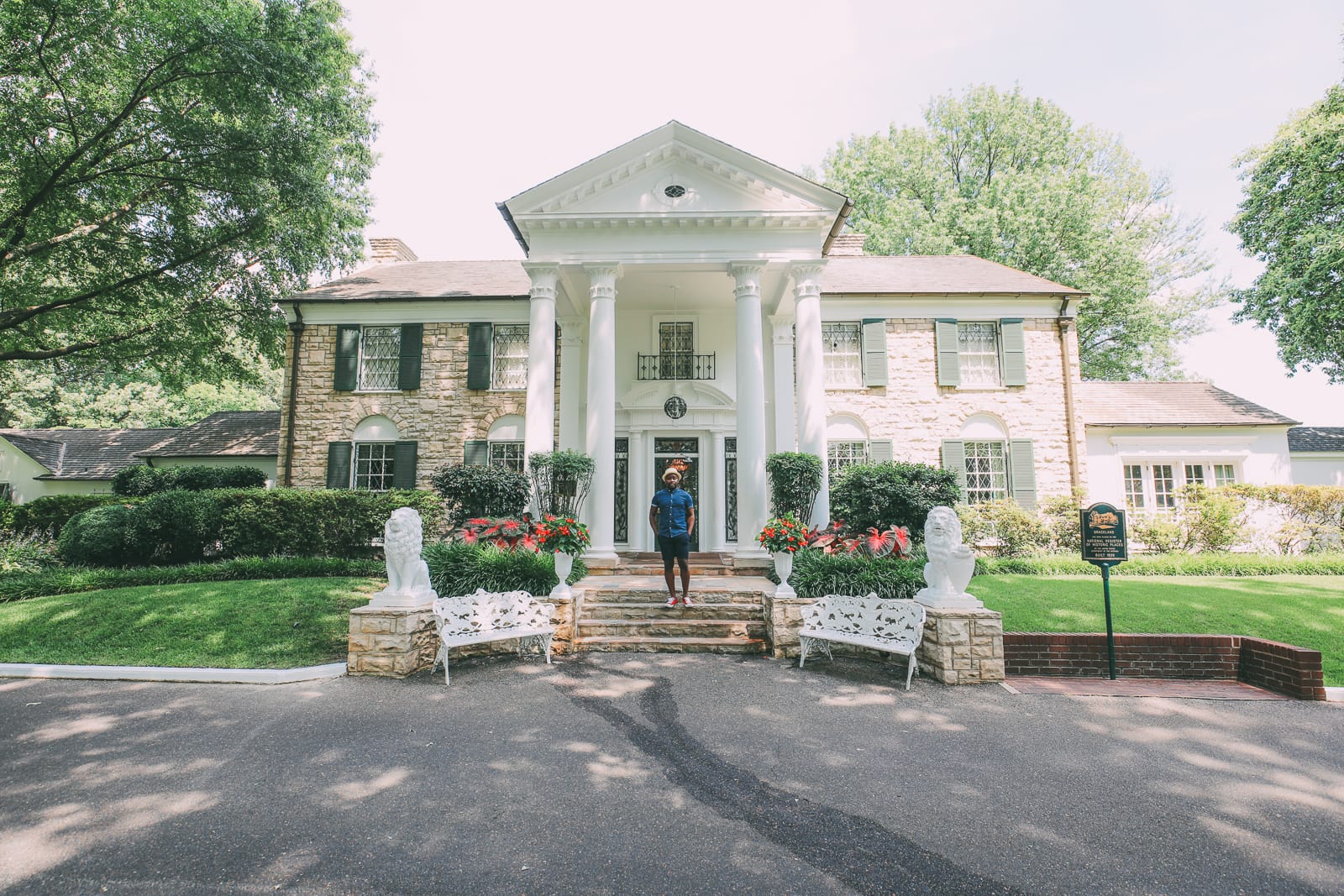 Around a three-hour drive from Nashville, Memphis is one of those cities that really shouldn’t be forgotten when you visit Tennessee. Perched, right on the western fringes of Tennessee (on the banks of the Mississippi, no less), it’s a great city to explore some of that famous southern charm. Best of all, there are so many things to do in Memphis… especially if you love music and some of the best grub. 🎶

After spending a good few days exploring Nashville, we decided to take the trip down to Memphis. For the longest time, I’d heard people harp on about how cool Memphis is, which made me even more determined to get there! Thankfully, during this trip, I was able to remedy that. Yay! 🤣

With that in mind, I wanted to show you some of the very best things to do in Memphis during your trip. It really is a fun city to experience, with so many spots to see. 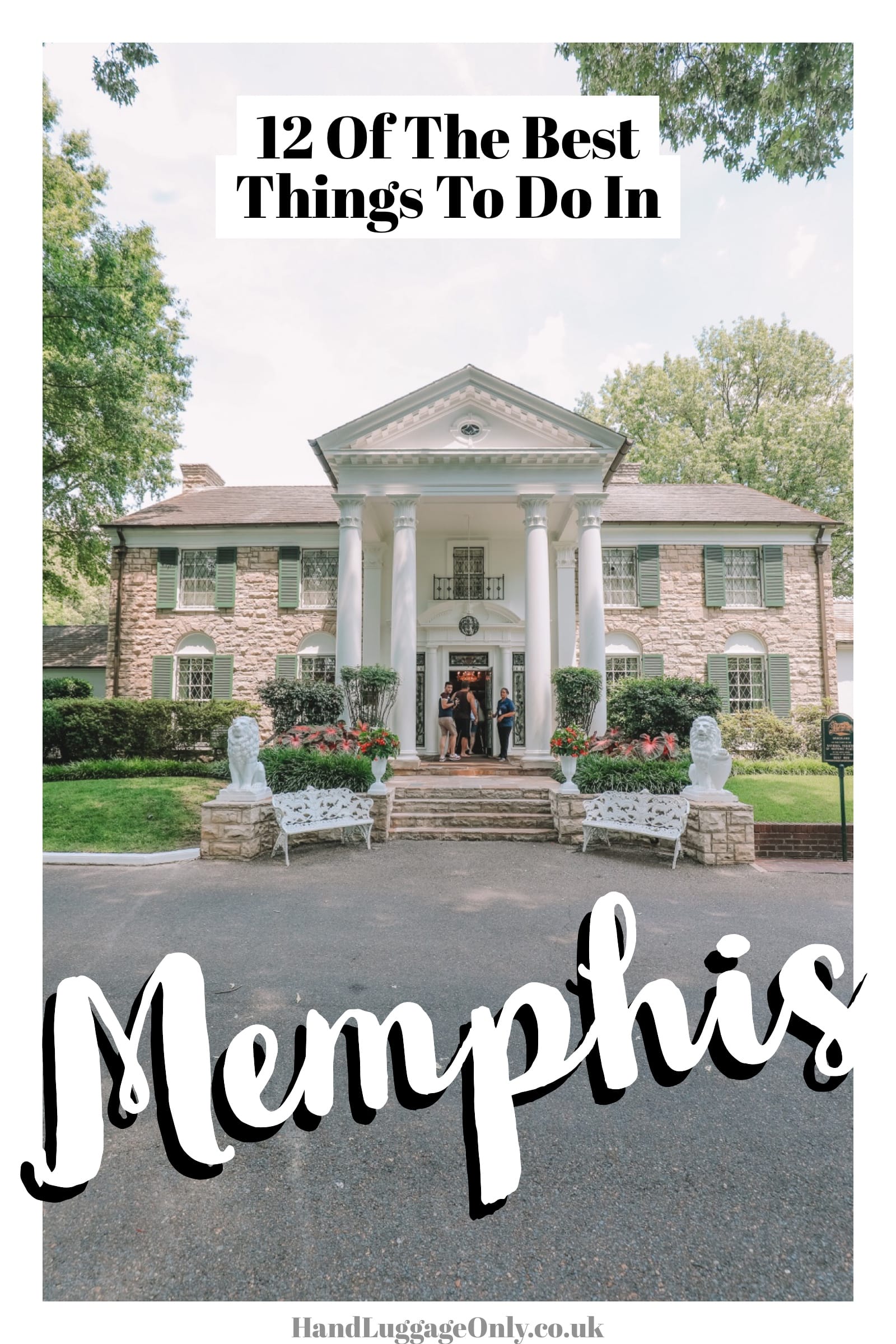 Take a look at some of the best things to do in Memphis, Below. 🇺🇸 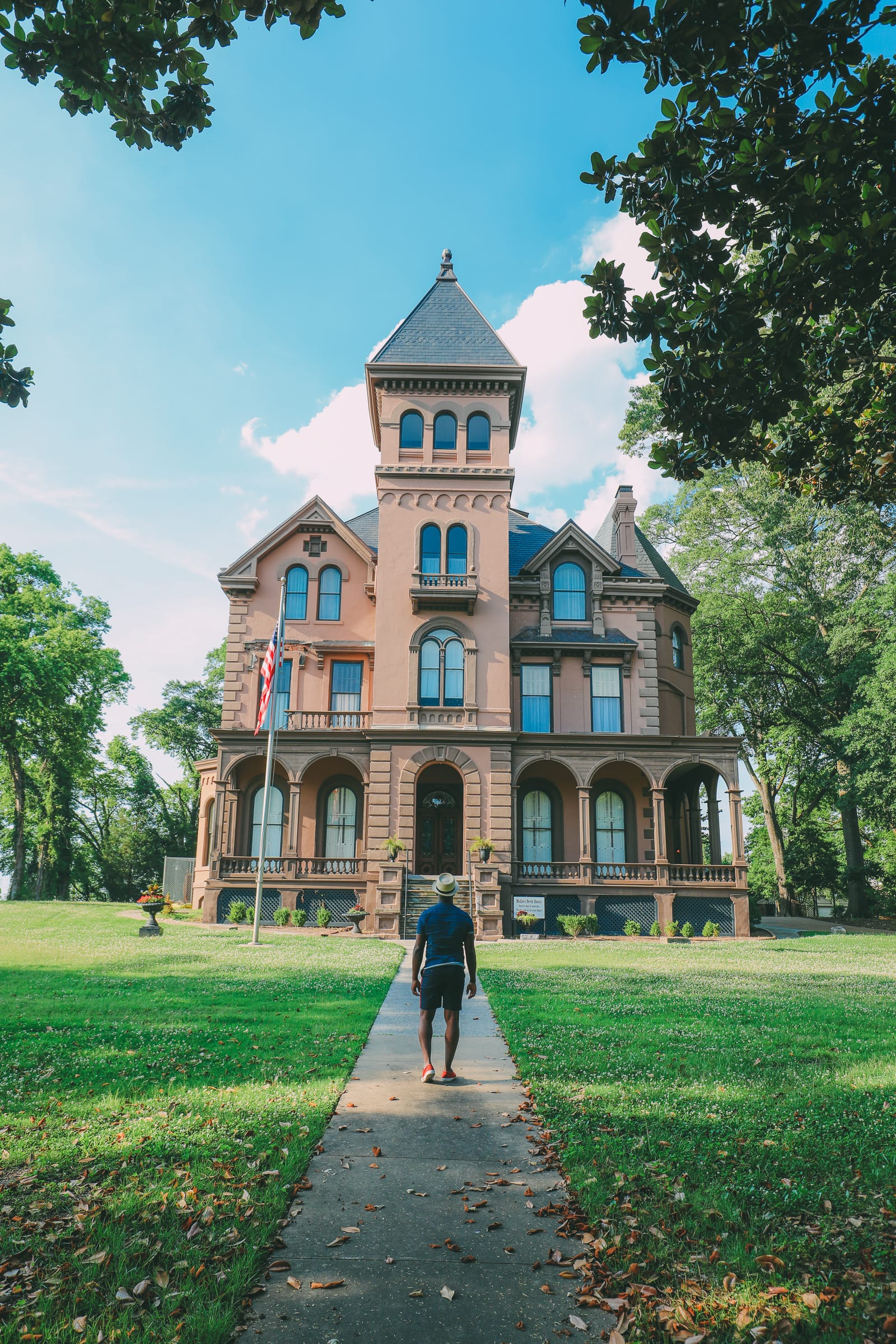 So, before visiting, I hadn’t heard anything about the Victorian Village in Memphis but boy am I glad we found it. This place is stunning… it’s almost as if you’ve stepped back in time. When it was first built, the village itself was actually on the outskirts of Memphis, obviously, over time this changed and became a part of eastern midtown (making it pretty easy for us visitors to see today).

Although some of the homes have long since gone, there’s still a few stunning exceptions that you really should see. For instance, the Magevney House, the Mallory-Neely House and the Woodruff-Fontaine House are all gorgeous museums that are based on Adams (street). Honestly, it’s one of the best things to do in Memphis if you love a good slice of history…

…and seeing some of that Victorian bling). 🤣

Best of all, if you want to stay in one of the historic homes, check into Harsson-Goyer-Lee House that’s now a bed and breakfast.

Now, there are a few spots in Memphis that really are iconic of the city. Graceland is one of them. For anyone not in the know, it’s the home of the late Elvis Presley that’s only about 15-minutes from downtown Memphis.

Nowadays, his home is open to the public and can be toured almost every day. Now, tickets can be a little pricier than some of the other attractions in Memphis but honestly, it’s a great place to visit. Before we went, I wasn’t a totally die-hard fan of Elvis but I had the best time here. It really is a special place to visit.

Once here, make sure to wander around his living room (and see his kitsch living room) and even hop on board the Lisa Marie Jet that’s parked right across the Graceland itself.

Read more on our trip to Graceland, here 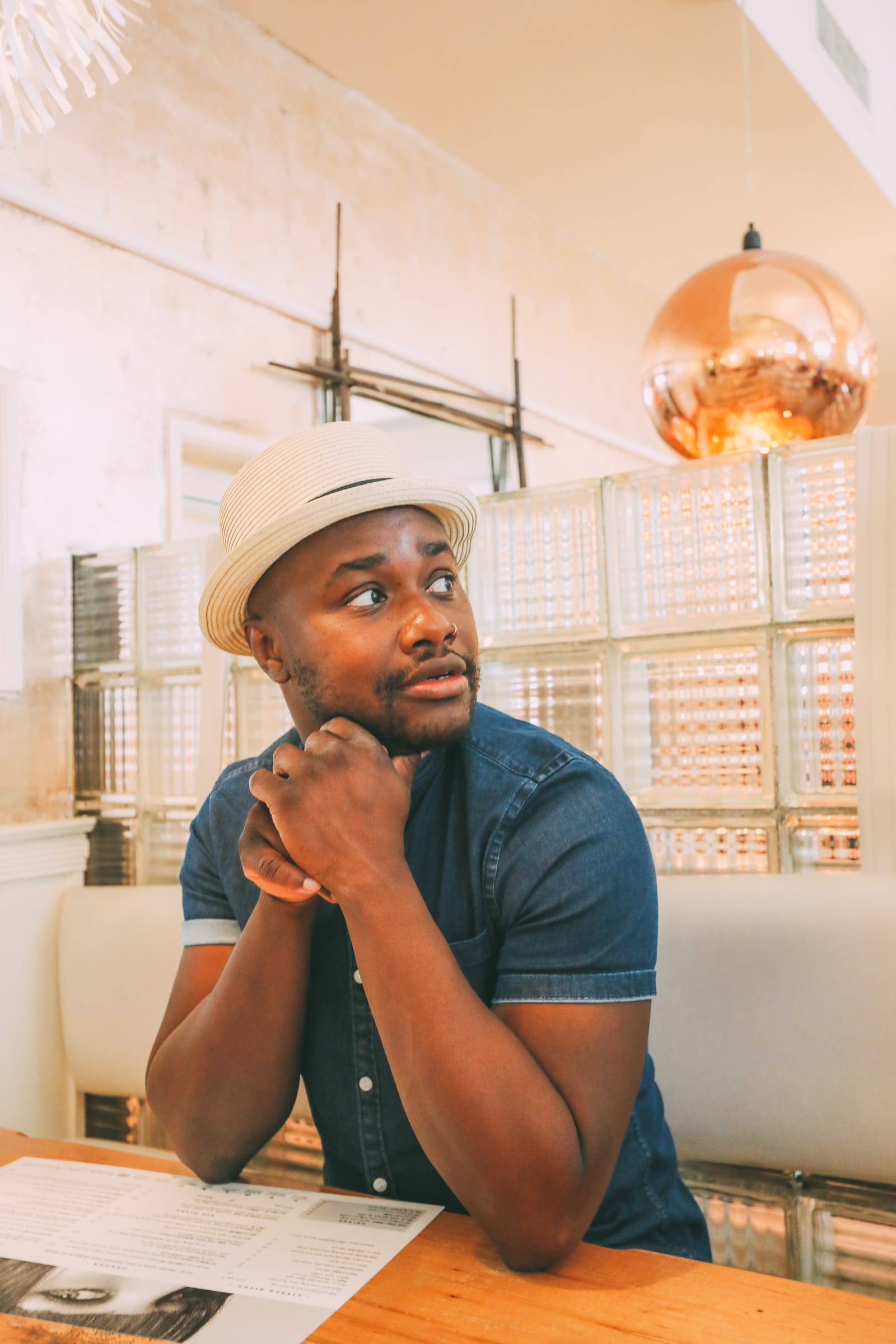 The Beauty Shop Restuarant is a totally kitsch and vintage style restaurant that you’ve gotta visit. Still decorated as if it were the old beauty shop, it’s based in the  Cooper-Young district of Memphis.

Now, well before this spot became a restaurant it was actually more famed to be the favourite hairdressing haunt of  Priscilla Presley (who would regularly go to get her curls and dye done here).

Today, you’ve got no chance of a haircut but you can be assured a whole heap of cocktails and amazing brunch… all whilst sitting in the old hairdresser’s chairs. 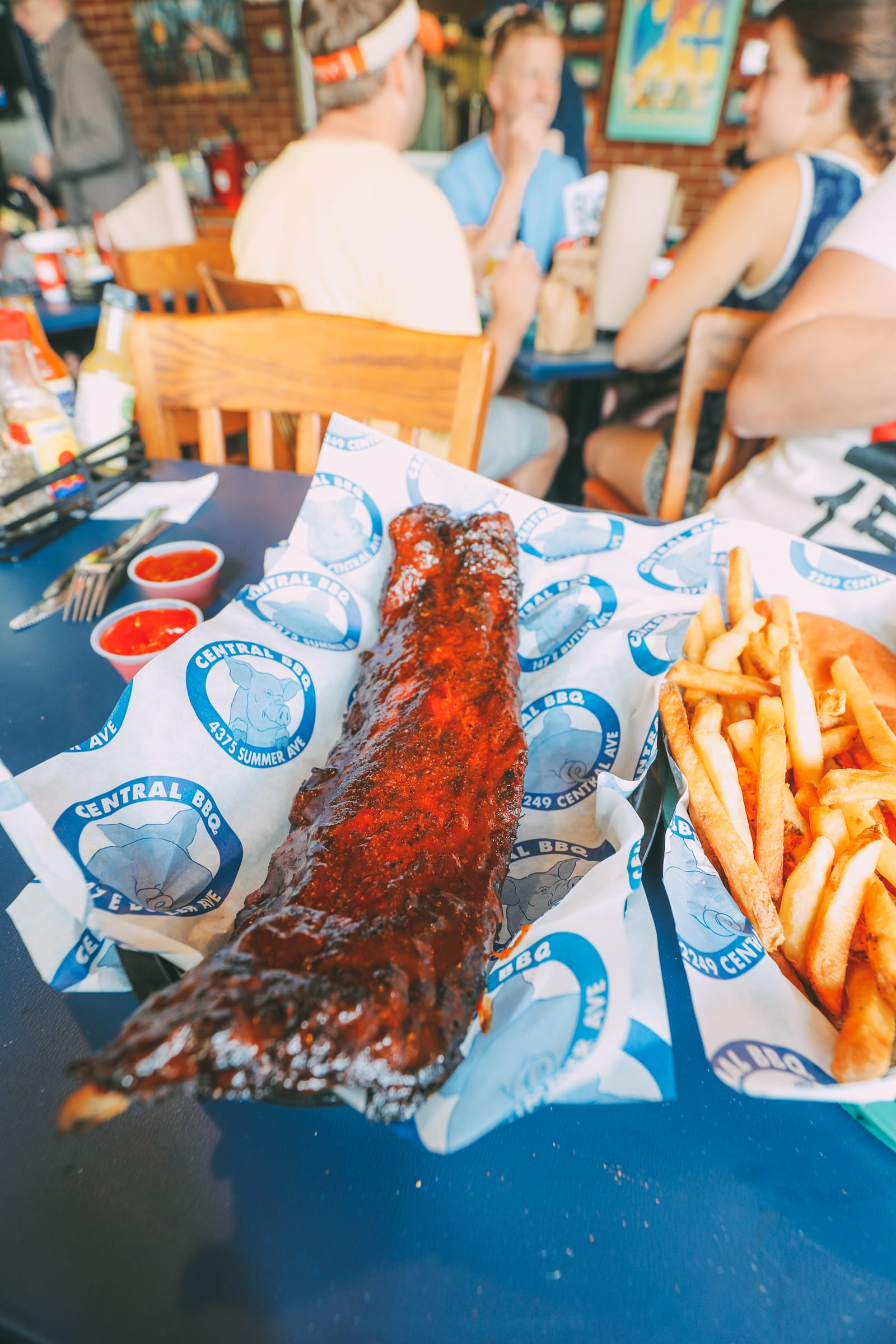 Okay, so Central BBQ is something of an institution in Memphis and serves up some of the best wet (and dry) ribs in all of Tennessee. Based at three locations across the city, Central BBQ is a proper southern grill with loads of character.

Now, be warned, Central BBQ is a pretty popular spot so make sure to allow a little extra time to queue (or arrive a little earlier than the midday rush).

The Peabody Hotel is possibly the most famous hotel in Memphis and a great spot for two cute and cool reasons! Now, each day, the Peabody hotel has a little duck march whereby the resident mallards walk out and into the fountain on their own little red carpet.

This can be seen every day at 11 am and 5 pm and is totally cute! It’s a tradition that goes back over 80 years and is still going strong.

Read more about our time at the Peabody rooftop party, here 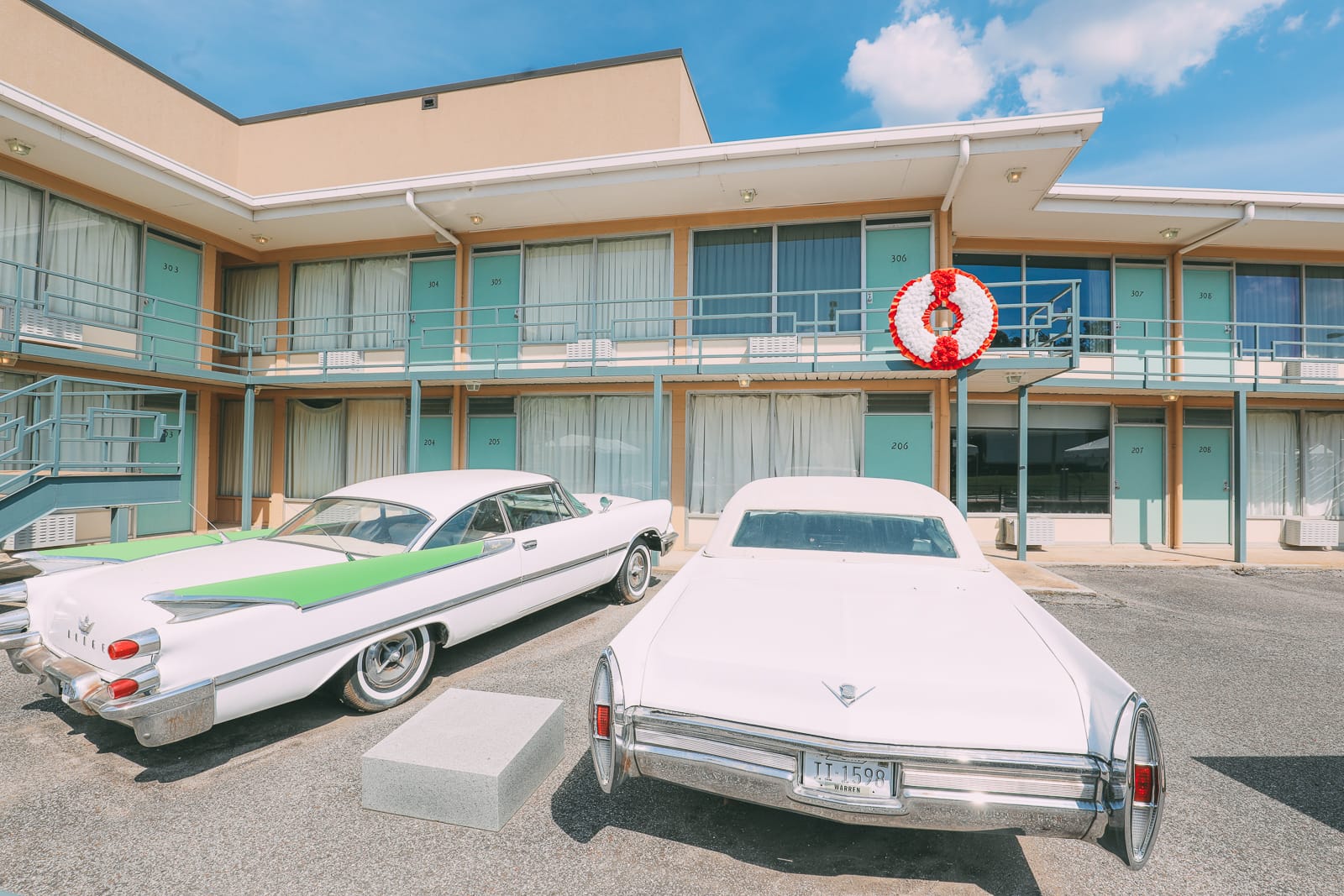 In lots of ways, Lorraine Motel is a spot that’s very upsetting to see. After all, it’s the place where the great Martin Luther King Jr was murdered. That being said, the struggle and cause for which he lost his life is as important now and it has ever been and a must-see when in Memphis.

Now part of the National Civil Rights Museum, the Lorraine Motel is a place to learn about the importance of equality, the awful prejudices that have (and still do) exist within humanity and the struggle to ensure that everyone is truly equal.

Just remember that the museum isn’t open on a Tuesday, so plan your visit around this.

Read more about our visit to the Lorraine Motel, here 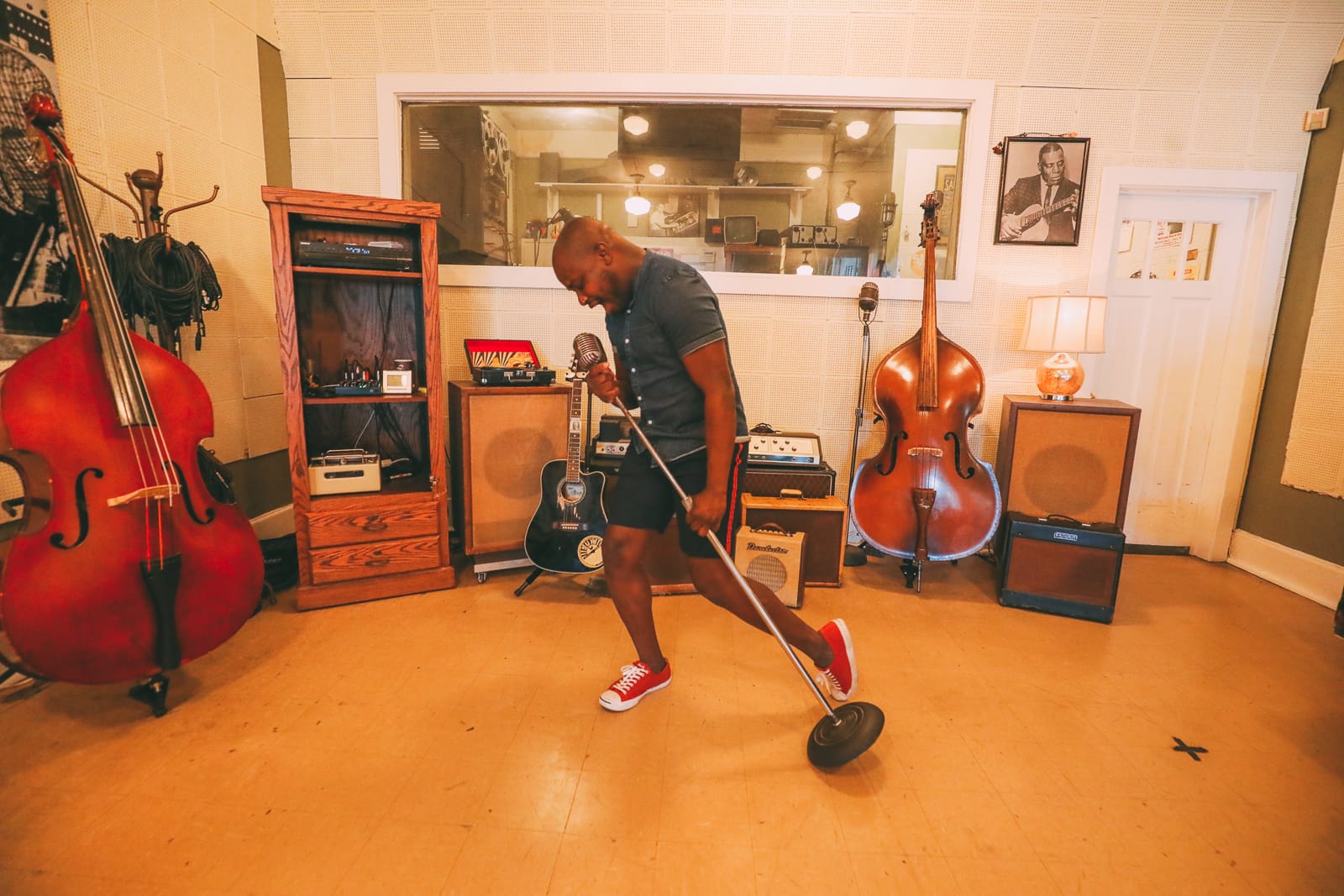 Based at 706 Union Avenue, Sun Studio was a total surprise to me. To be totally honest, I wasn’t that bothered about visiting before our visit but as soon as we arrived I quickly realised how important this studio is.

Known as the birthplace of rock-n-roll, Sun Studio was the spot where Elvis, Roy Orbison (who I grew up listening to), and Jonny Cash all recorded some of their biggest hits. Once you’re here, make sure to have a wee sing on the mic that Elvis regularly used, see all the incredible original pieces used by the million dollar quartet and learn more about rock-n-roll. 🎶

Best of all, the tour guides are so passionate and knowledgeable. You’ll have a-rockin’ time! 🤣

8.) Chow down at Gus’s Fried Chicken 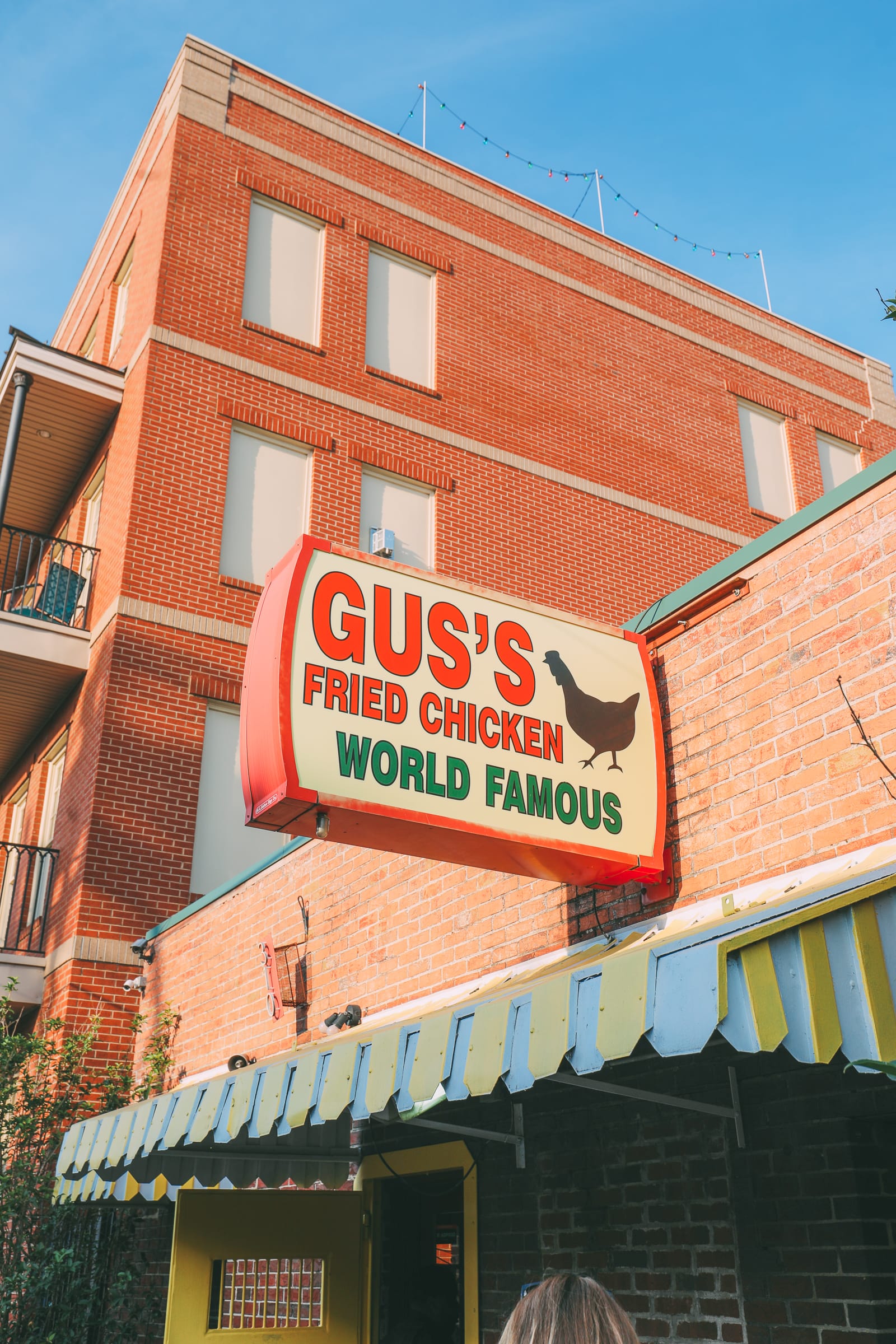 Talking of foodie institutions, Gus’s Fried Chicken is another yummy spot you don’t want to miss. Based at around 5 locations around the city, we popped over to 310 S Front Street (which was epic, by the way).

Again, this is another popular spot when it comes to peak eating times, so either be prepared to wait or to arrive a little earlier. 🐔

Once inside, make sure to try one of their plates which comes with mounds of fried chicken, baked beans and slaw. Honestly, it’s one of those comfort meals you’ve gotta have. 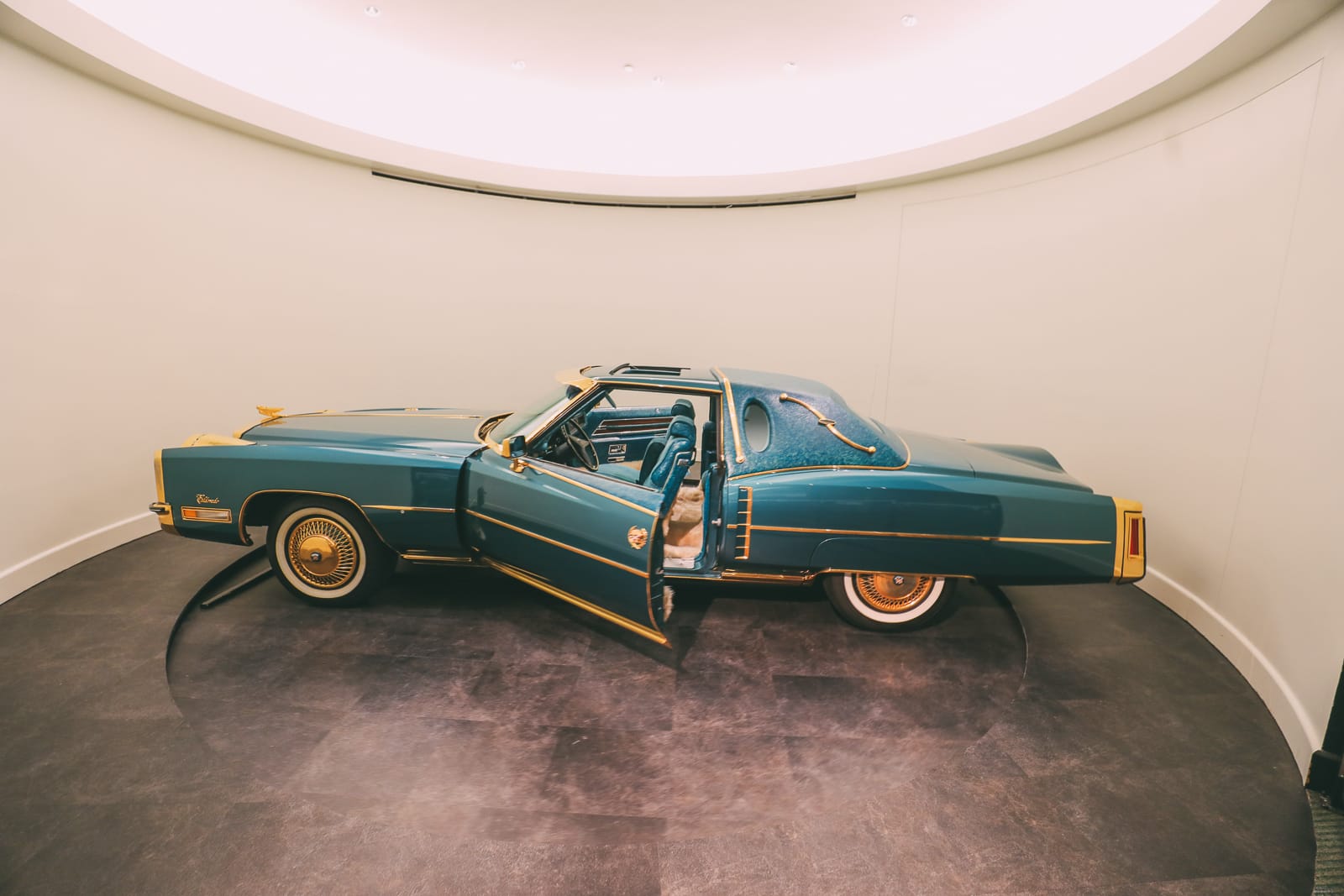 So, the Stax Museum is possibly is one of those spots that just lives and breathes American Soul music. 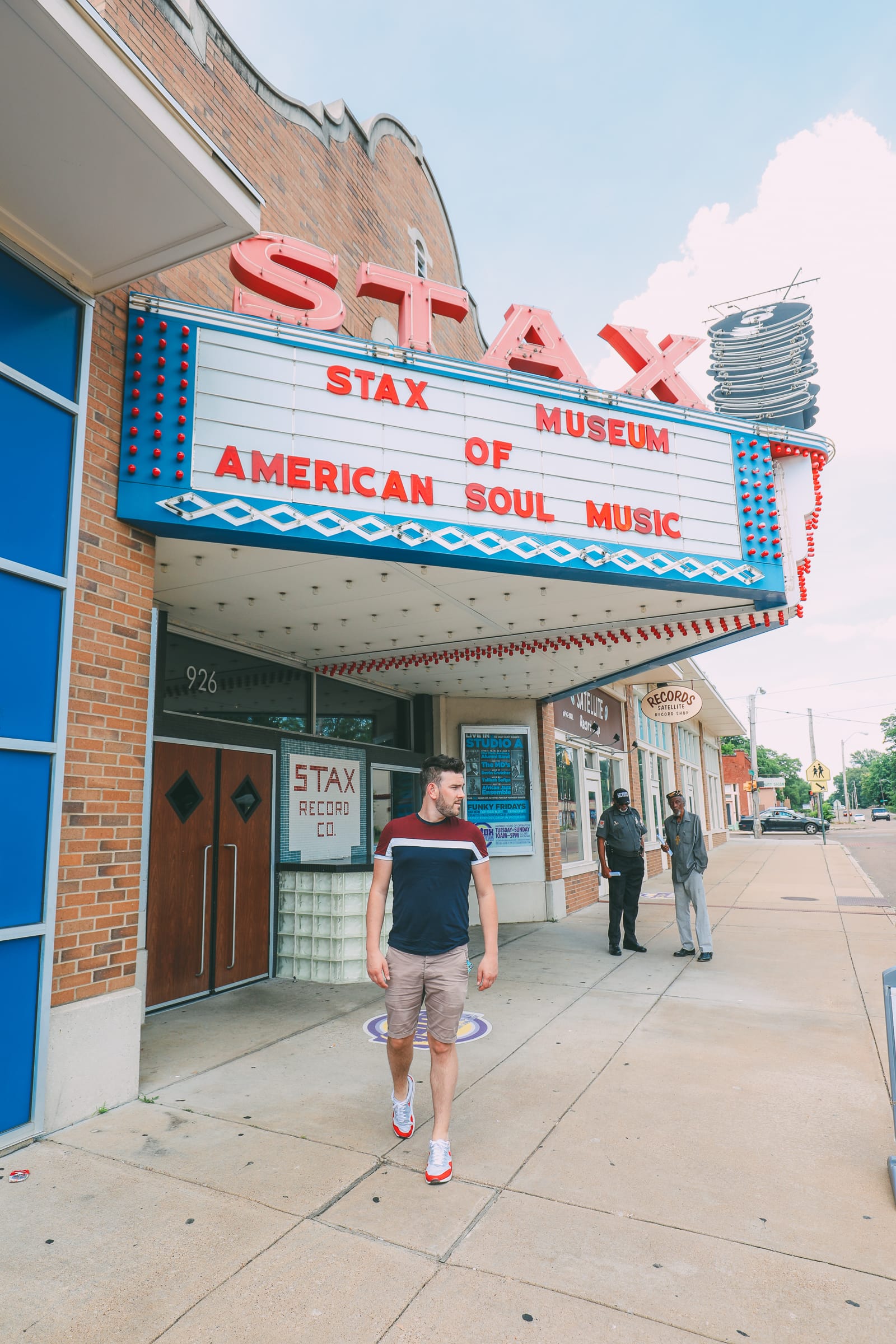 Once inside, make sure to keep your eyes peeled for Isaac Hayes’  eye-catching Cadillac Eldorado, check out the period recording studio equipment and listen out for songs like Try A Little Tenderness by Otis Redding. 🎶

Now, again, with most of the best spots, you might wanna factor in a little queue time. We ended up waiting around 50 minutes from the start of queuing to holding our snow cones. It can take a while but it’s totally worth it. Don’t forget to order their yummy invention – the Snow Cone Supreme!

If you’re not into queueing, you might wanna give this spot a miss. That being said, if you want to miss the queues, head over first thing in the morning or on a less sunny day.

Beale Street has to be one of the most vibrant streets in Memphis! Home to the blues, it’s a great spot to spend an evening out and listening to some pretty good live local music. In lots of ways, Beale Street feels like the entertainment district of Memphis and you can easily sing away a good few hours here. 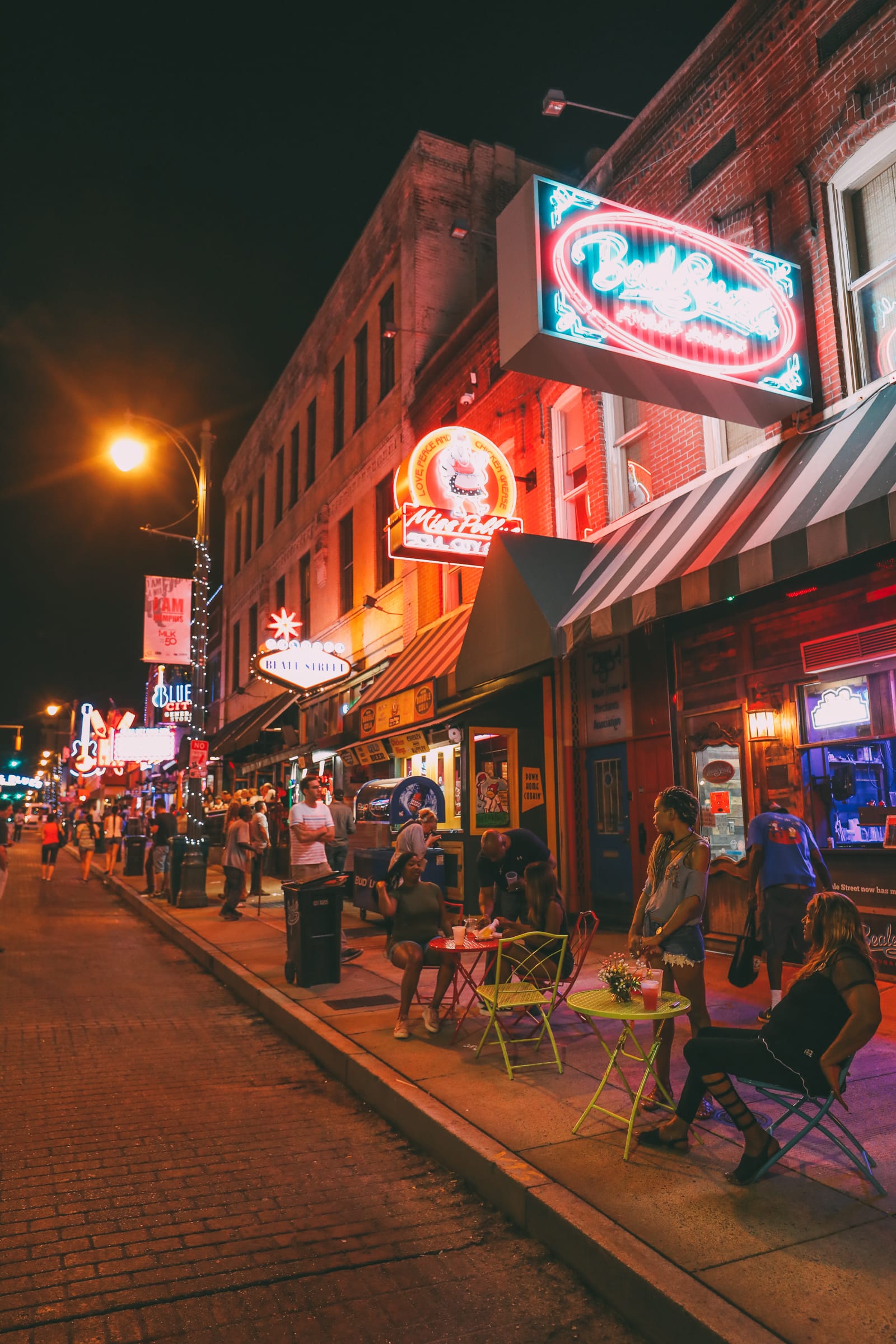 Make sure to stop off at some watering holes like; Silky O’Sullivan’s, Dyers and BB Kings Blues Club where you’ll almost certainly end up dancing the night away. It really is one of the best things to do in Memphis if you love a good night out. 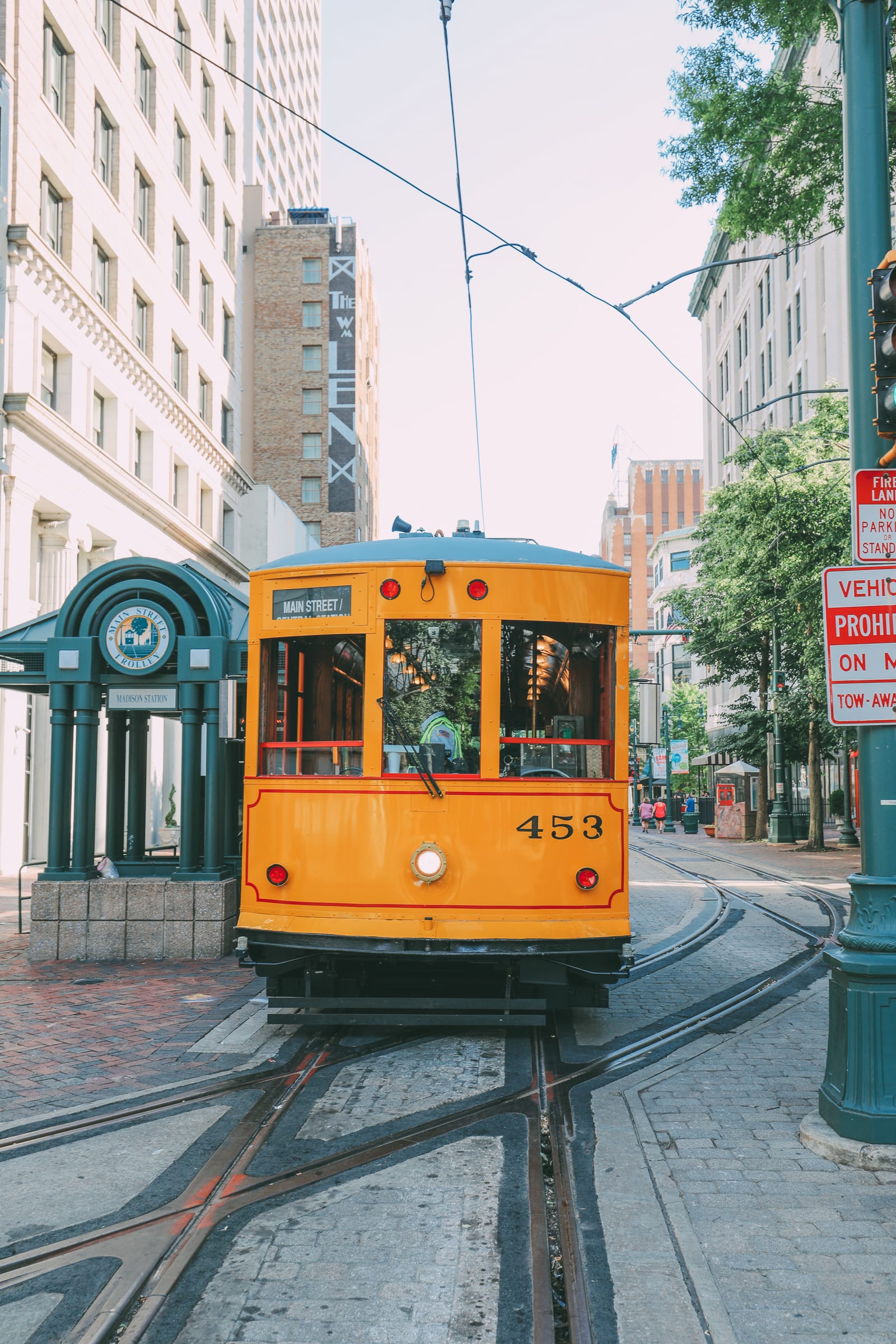 Running intermittently since the 1930’s, the MATA Trolley is one of the coolest ways to see downtown Memphis. Just recently opened again, the Main Street Line also stops at some of the best things to do in Memphis, like’ the; Beale Street, Peabody Place and Huling for the National Civil Rights Museum.

Read more on the best things to do in Nashville

12 Of The Very Best Things To Do In Nashville 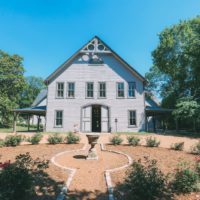 12 Very Best Things To Do In Nashville 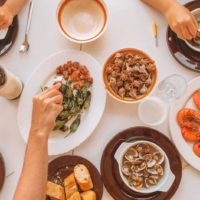 8 Of The Best Restaurants In Niagara-on-the-Lake 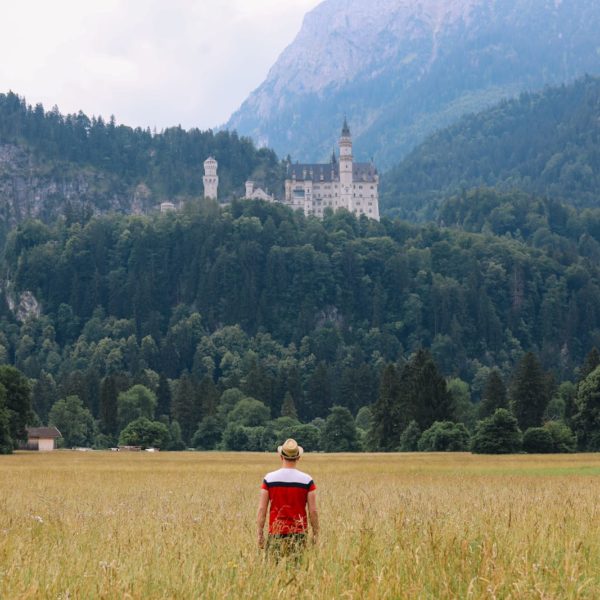 The 12 Best Hikes In Germany You Have To Experience 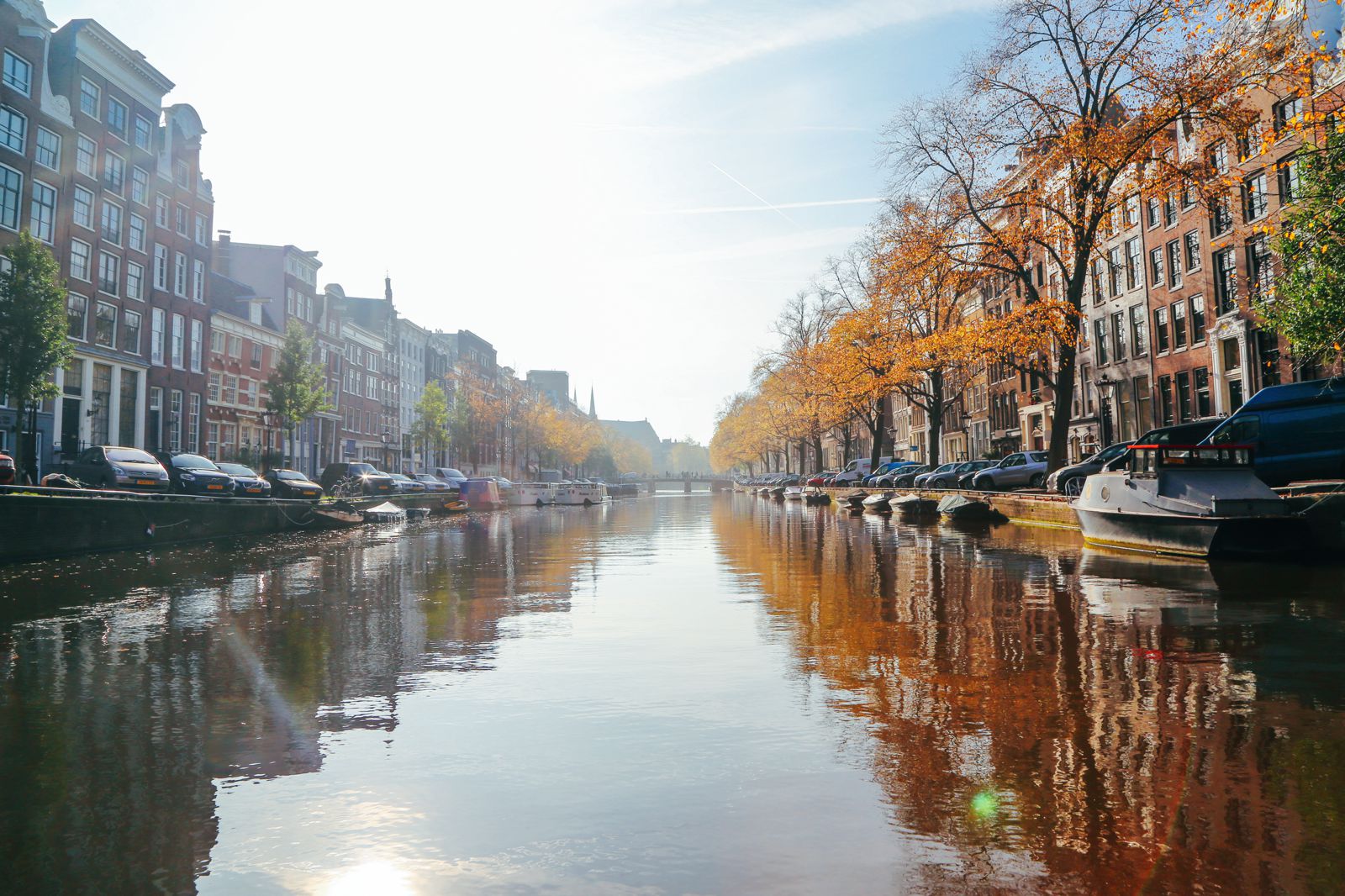 12 Dutch Experiences Every Visitor Should Have In Amsterdam 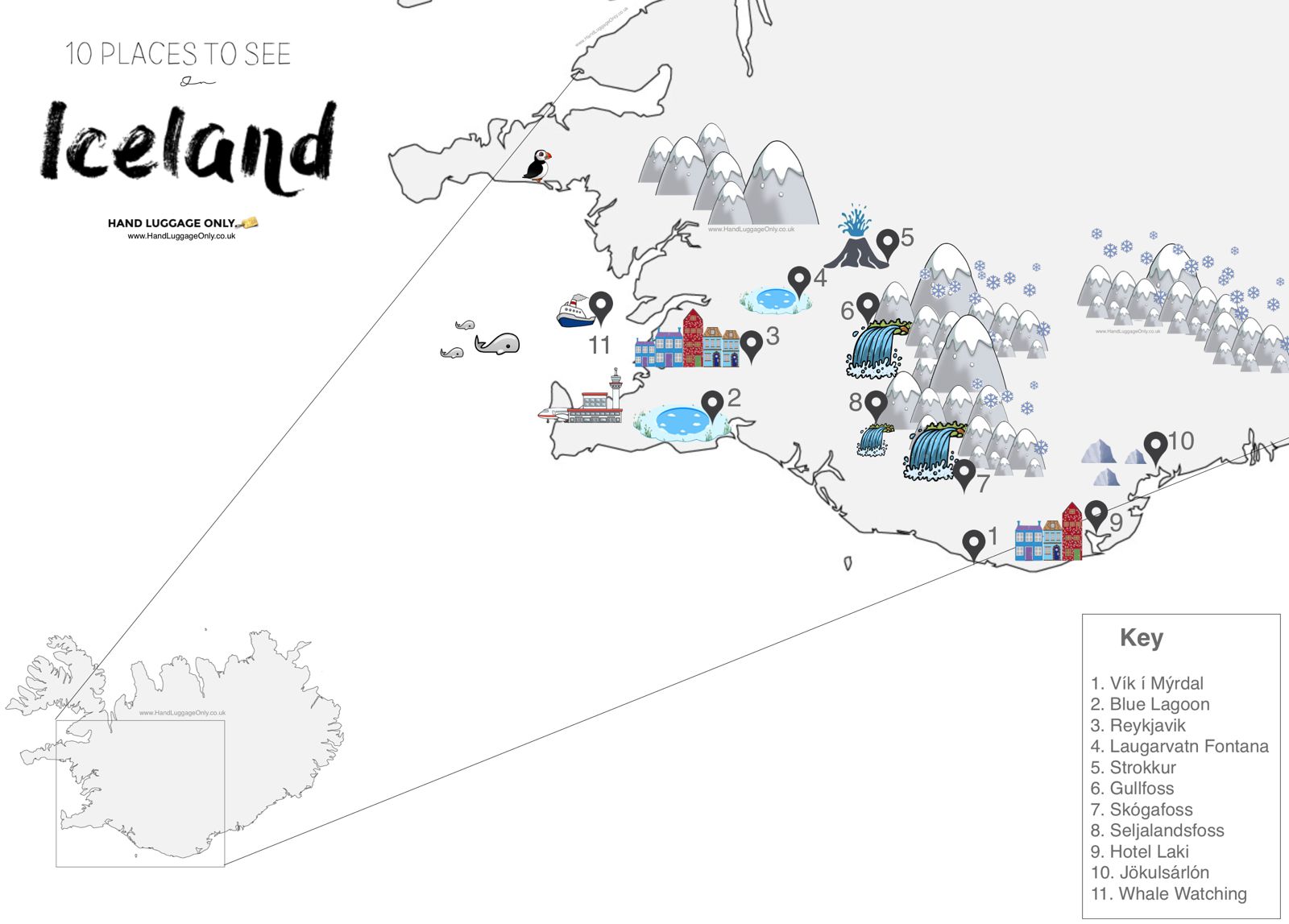