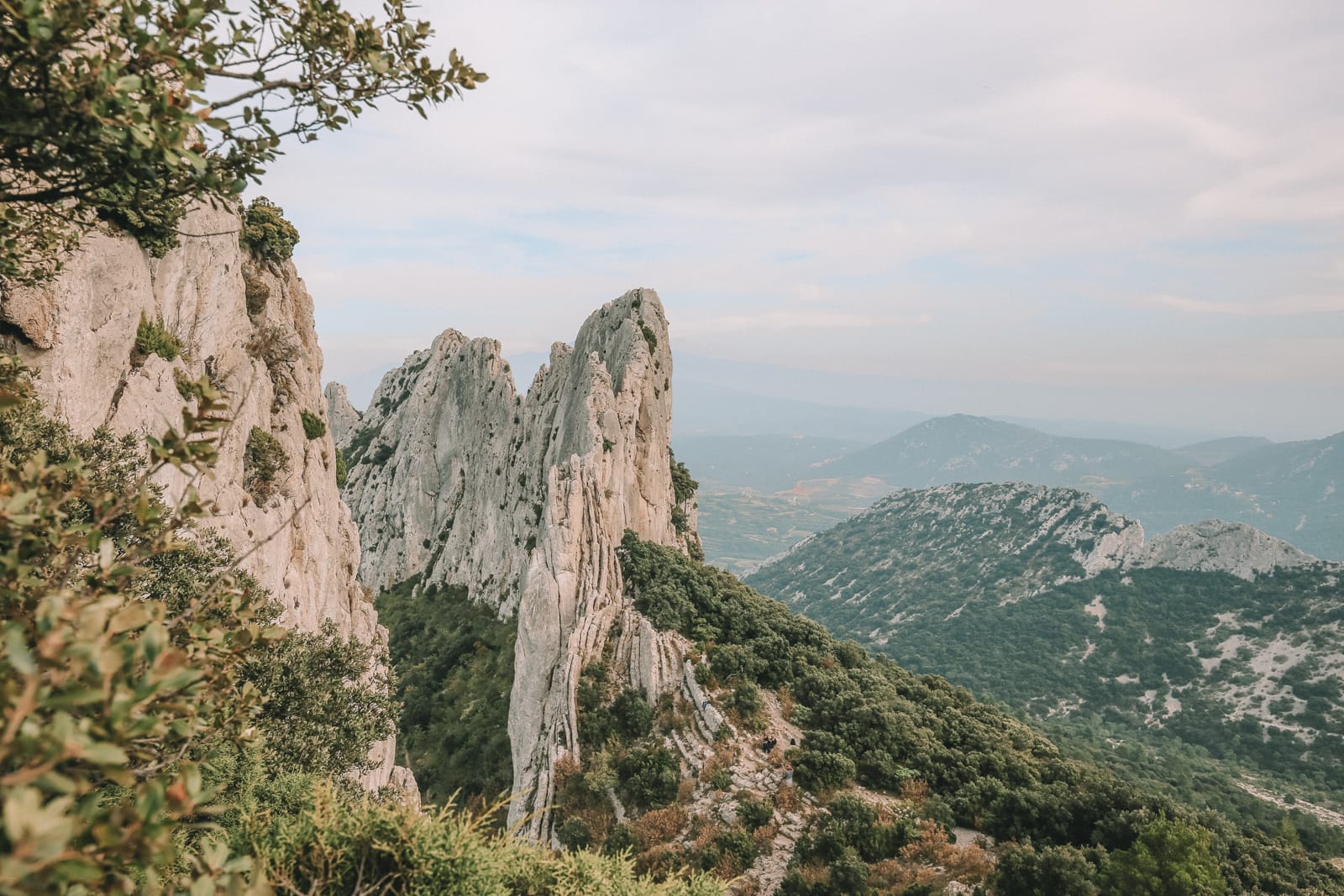 After a long day exploring Avignon the day before, I actually ended up sleeping so deep that I missed my alarm… and subsequent breakfast!

Thankfully, I knew I’d be meeting up with local chef John Chiri at around 10-ish am in the Halles d’Avignon so I wasn’t too worried. 😉 😀

Now, the best thing about meeting John was that he was gonna cook up lunch today (fine – there were other great things about meeting him but having missed breakfast, my priorities were sorta different by that point 😁). 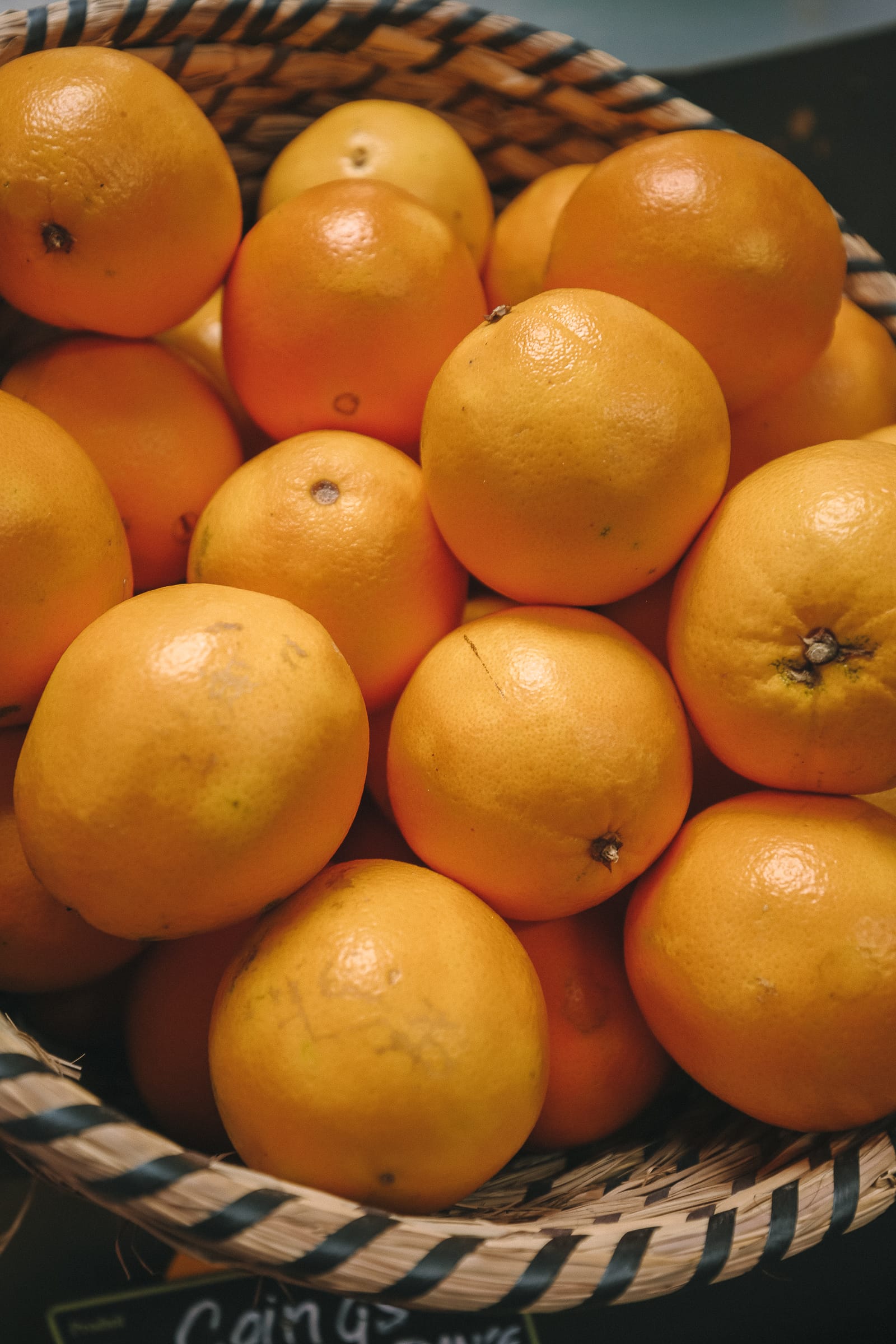 After a slow jaunt that took us past the carousel and square, we made it to his restaurant, Centr’halles within the market hall itself.

*It was actually one of the places that had been recommended to us on Instagram and I was so happy we’d have a chance to experience (and gorge) here. 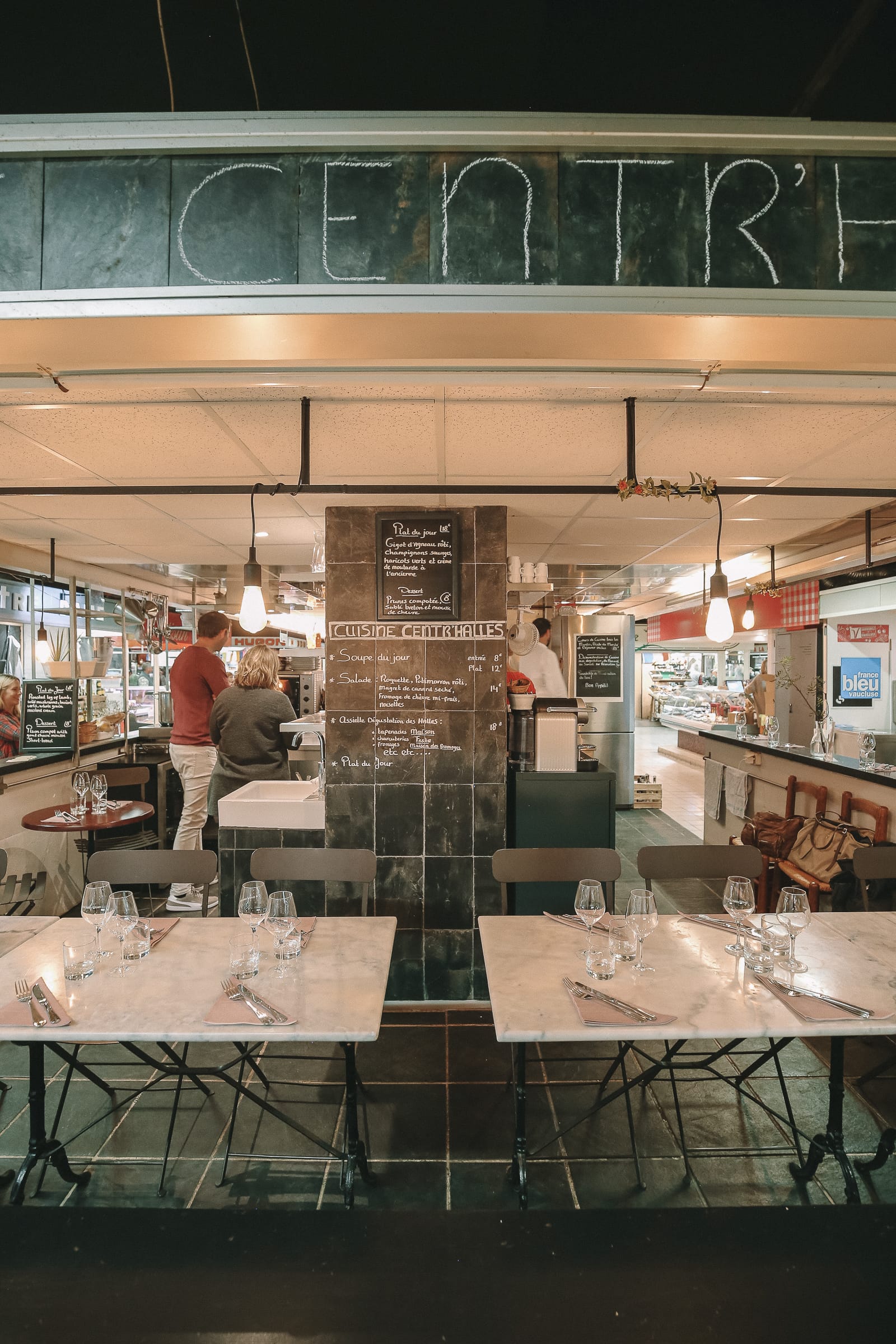 On arrival, we went for a little wander through the market with John. This was an experience in itself! Everyone knew John here… he was chatting/gassing to almost everyone we saw. It made you feel almost like a local here and like shopping for this was your everyday routine.

He’s such a fountain of knowledge about all things food and even when we stopped off at the cheesemonger’s to grabbed us a sample of a cheese that’s matured within caves, he knew exactly why this was so. John explained that it was done in caves to allow little animals (like little mites/bugs) to actually nibble their way through the hard skin of the cheese and actually begin the process of oxidising the cheese. 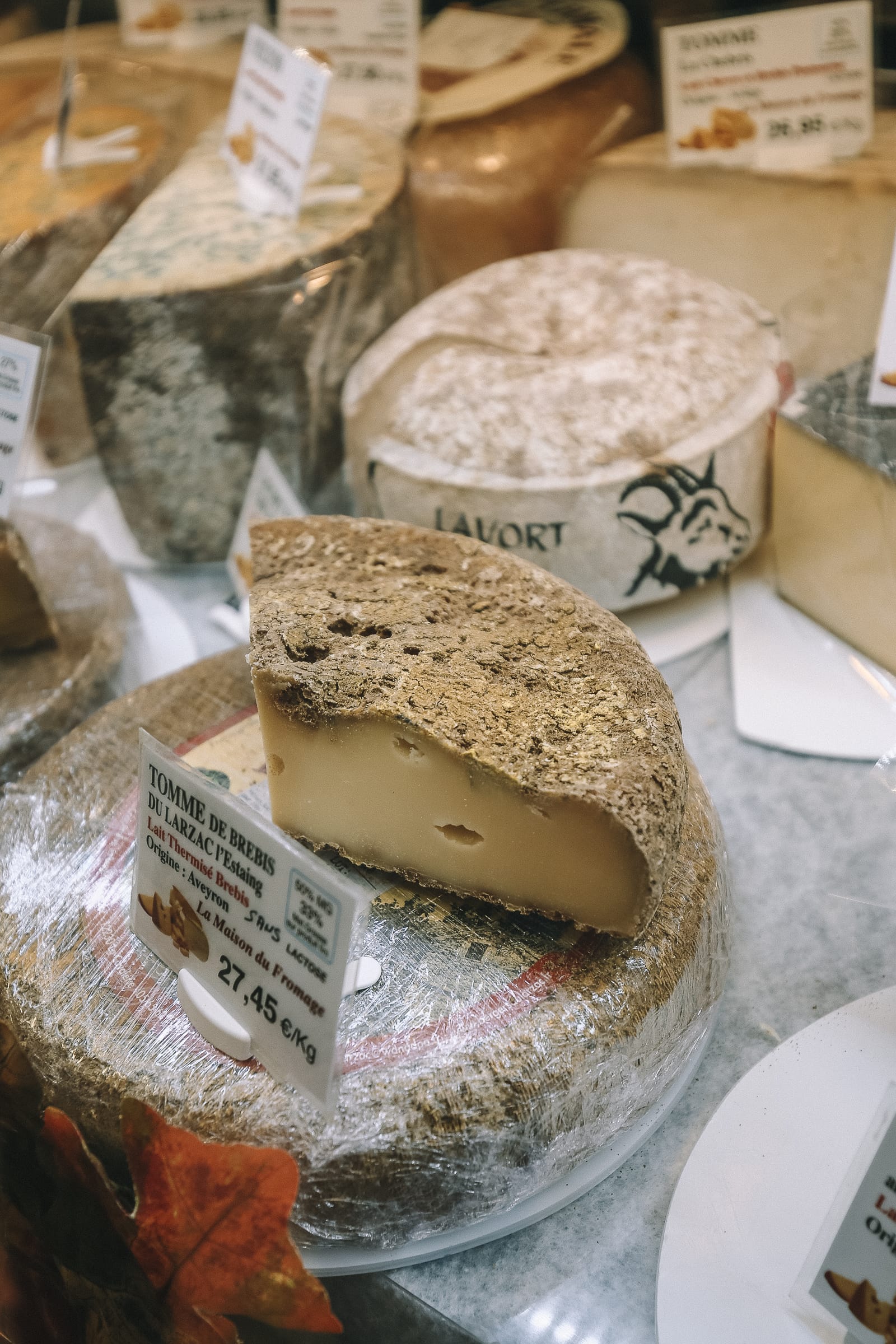 This is why the cheese rind has so many holes in it.  As you can imagine, it was a pretty zingy cheese.

By the time we’d finished our galavant around the market, it was lunchtime. With that, John swooped into action, making up a whole array of courses for us to eat.

Today, I decided on trying the lamb and finishing off with the yummiest pudding of a shortbread base and a cheese-based creme topping. It was almost like a deconstructed cheesecake that slid right into my tummy with no problems at all. 🤣 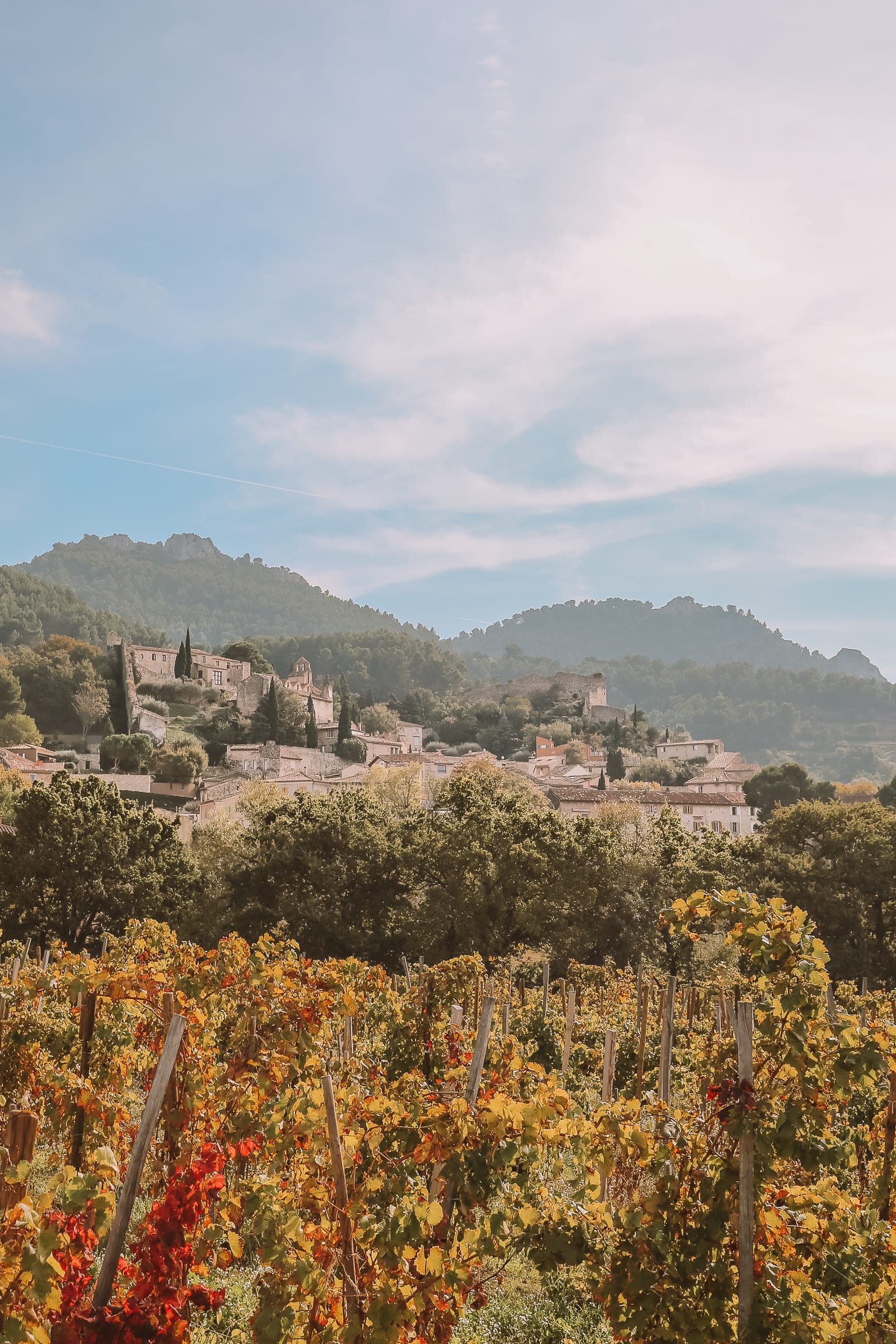 After filling up, it was time to leave Avignon for the next port of call, Gigondas. Around an hour’s drive from Avignon, Gigondas is a tiny little village that has become pretty well-known for its red wine. 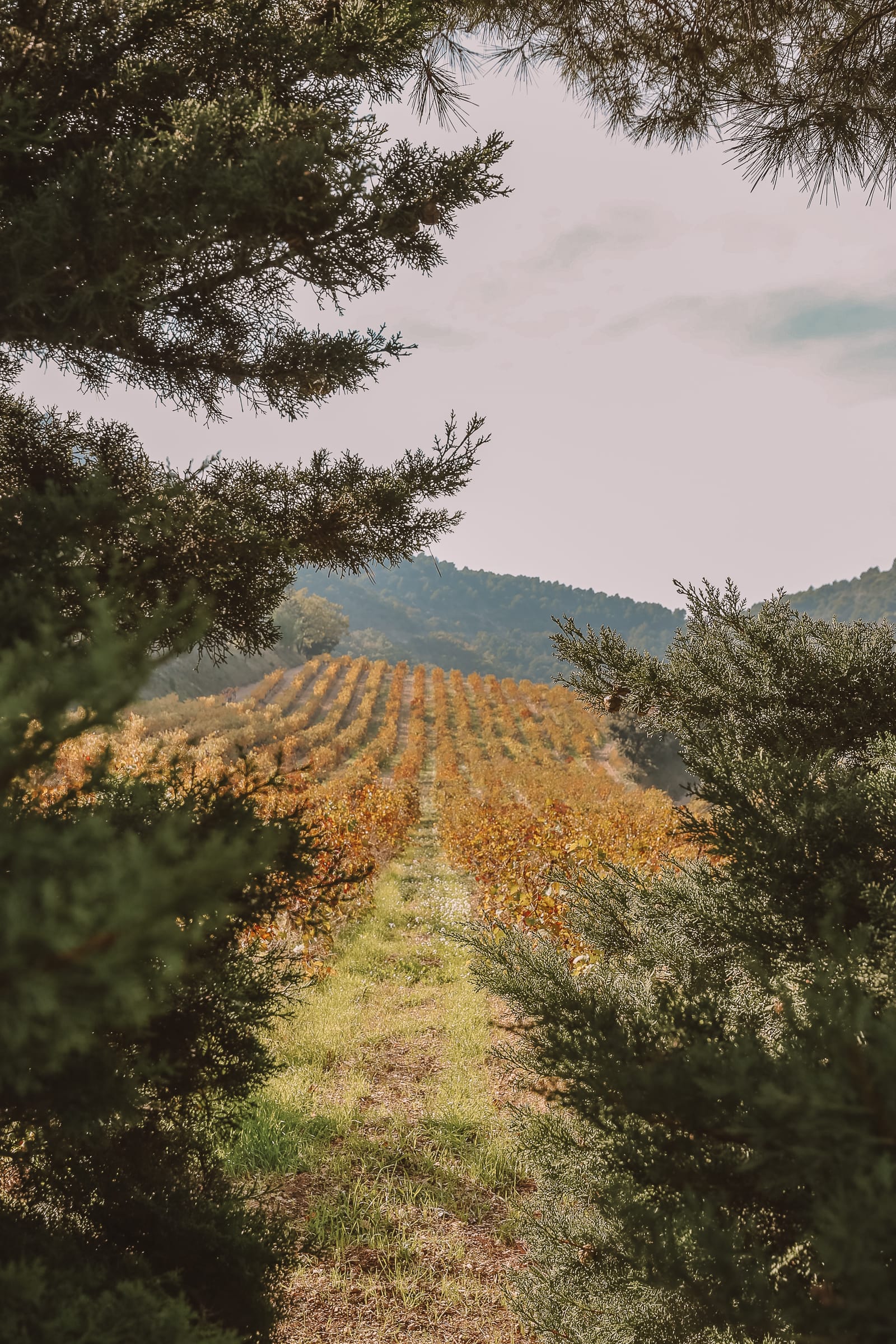 Alas, I’d have loved to have plodded around the town sipping on good wines but we had other plans for the afternoon. One that was going to get pretty strenuous.

A little further up the road was the Dentelles de Montmirail area. A stunning area of Vaucluse (a department of Provence) that doesn’t even feel like France (if that makes sense).

In fact, the scenery wouldn’t have gone amiss in grand landscapes of the Dolomites in Italy or even in North America. It was totally different from what I expected to see… in a good way, of course.

Now, the best thing about this mountain range is the 600 (or so) trails that criss-cross the area itself. Of course, I came a little unprepared (in my Converse) but I didn’t care – I could already tell the views would be worth it. 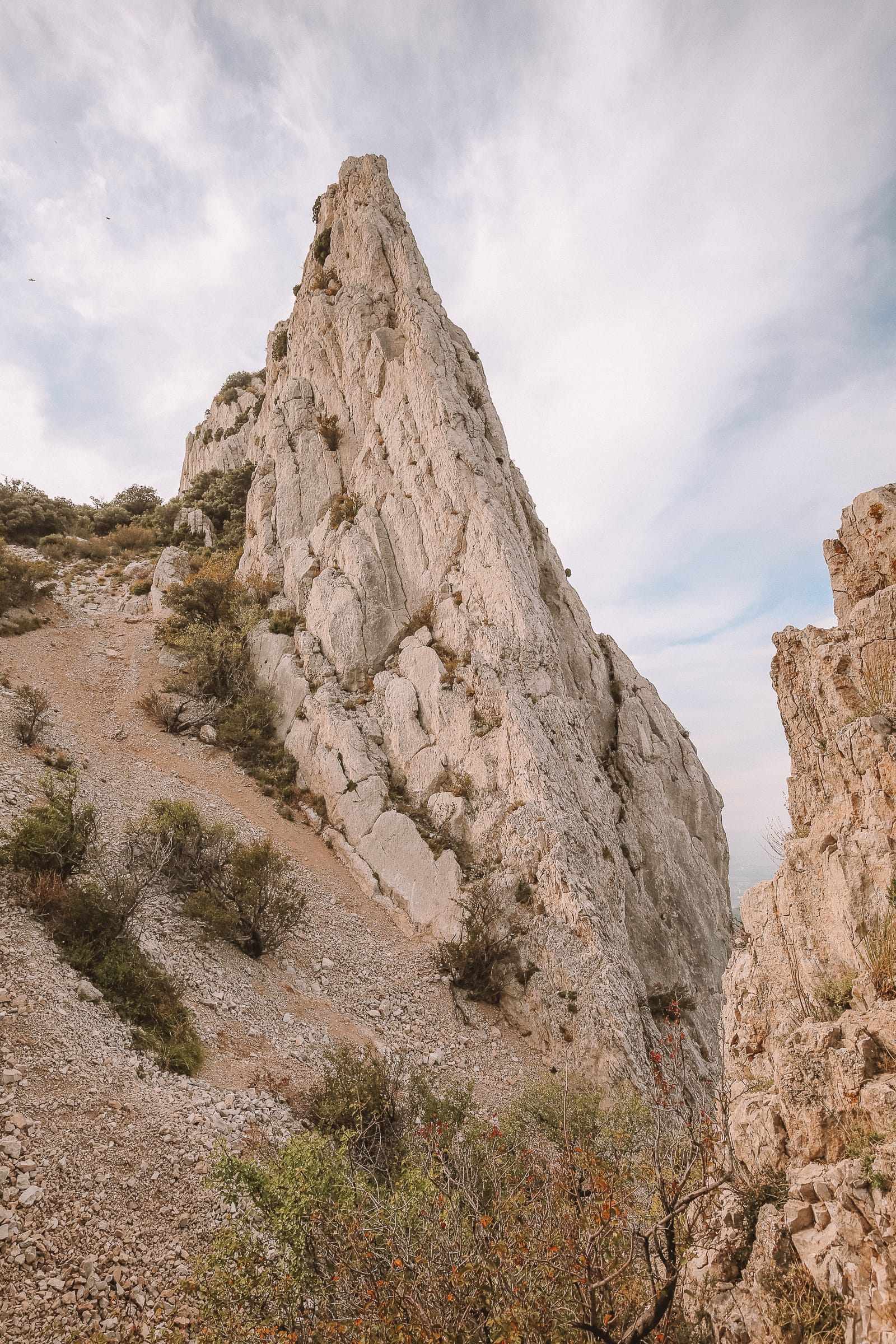 Plus, a little hike was going to be a great way to work off that indulgent lunch that John made for us. 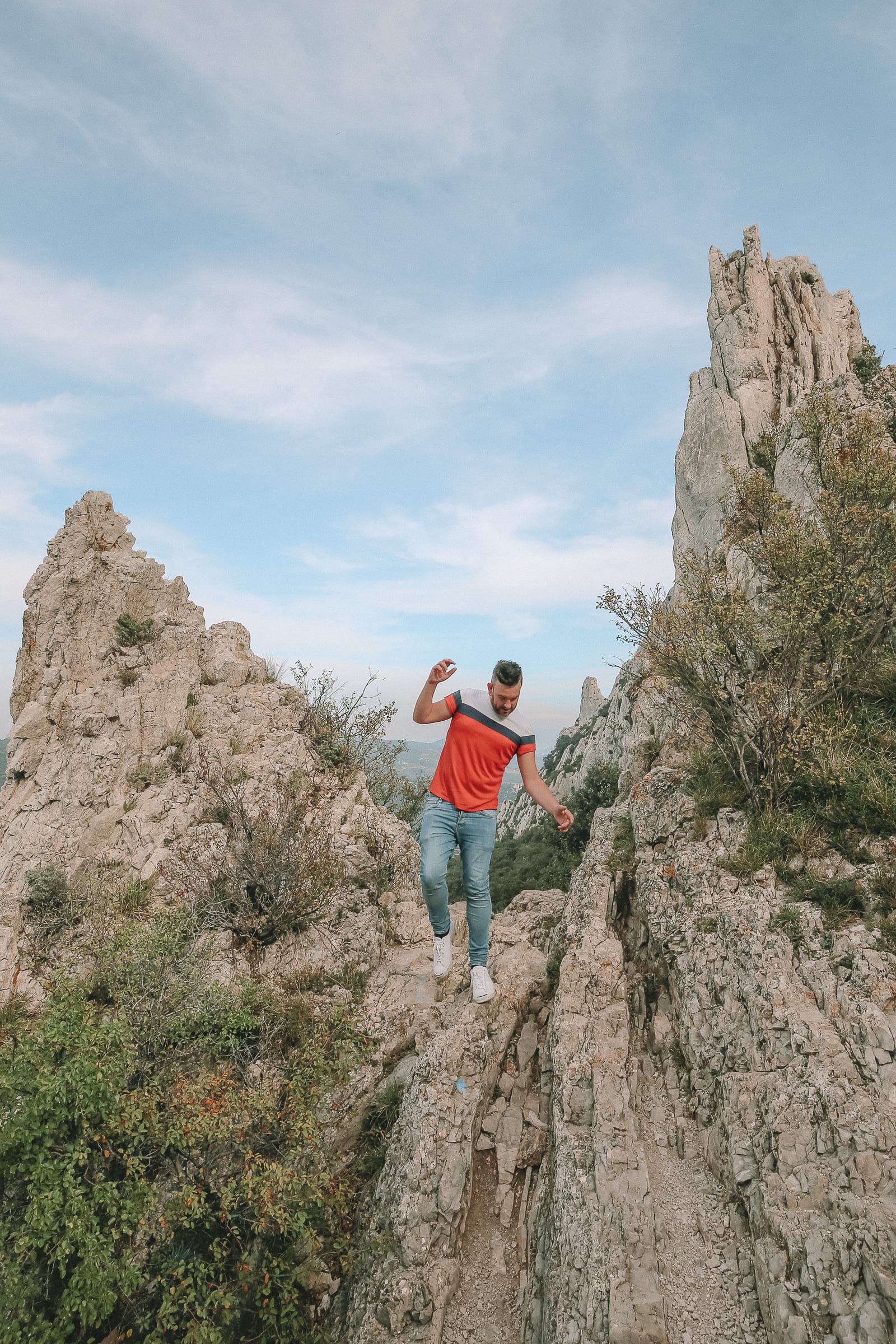 After arriving at the foot of the hills, we joined a trail that took around an hour or so to climb up. That being said, it probably would have been quicker if I’d actually worn proper hiking shoes. 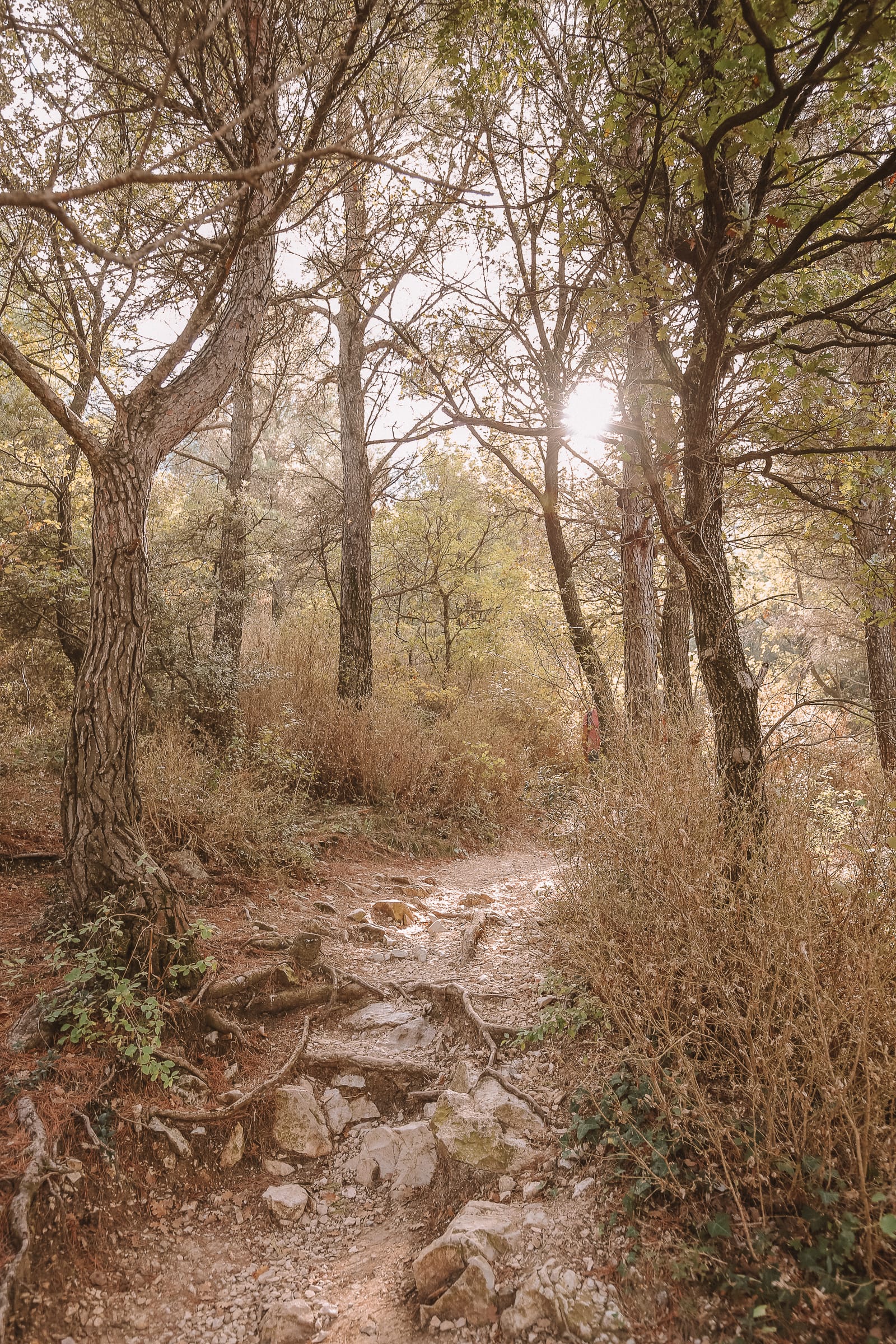 Now, I later learned that these huge mountains were actually formed from Jurassic limestone (millions of years ago) that pushed its way up into the towers that we see today.

Thankfully, the trails were not quite as steep as the mountains themselves as Giles (our guide) helped us navigate. 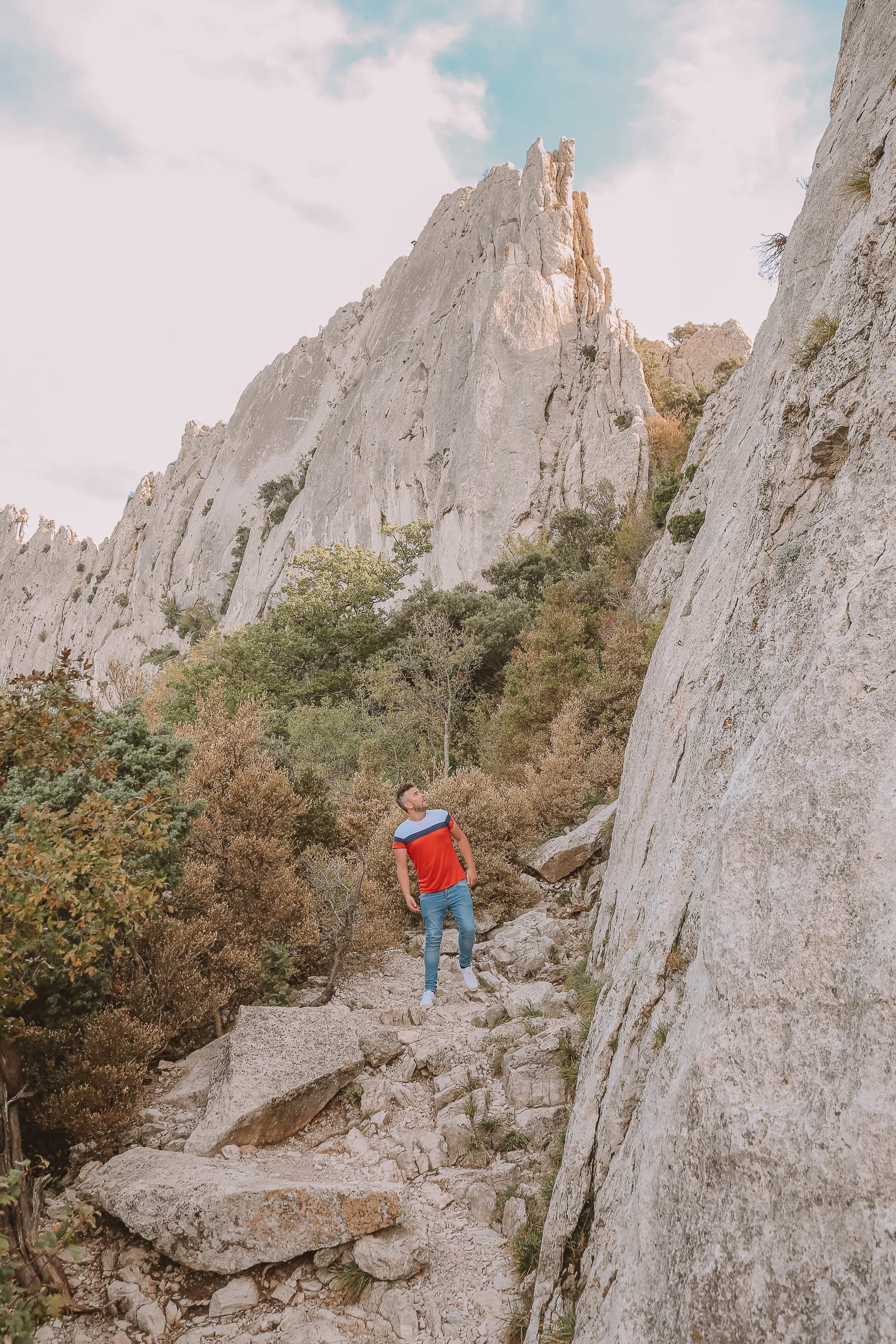 Along the way, there were so many little spots that looked across the whole department of Vaucluse and lots of Provence. Plus, the weather stayed totally clear which made for the perfect excuse to be outdoors. 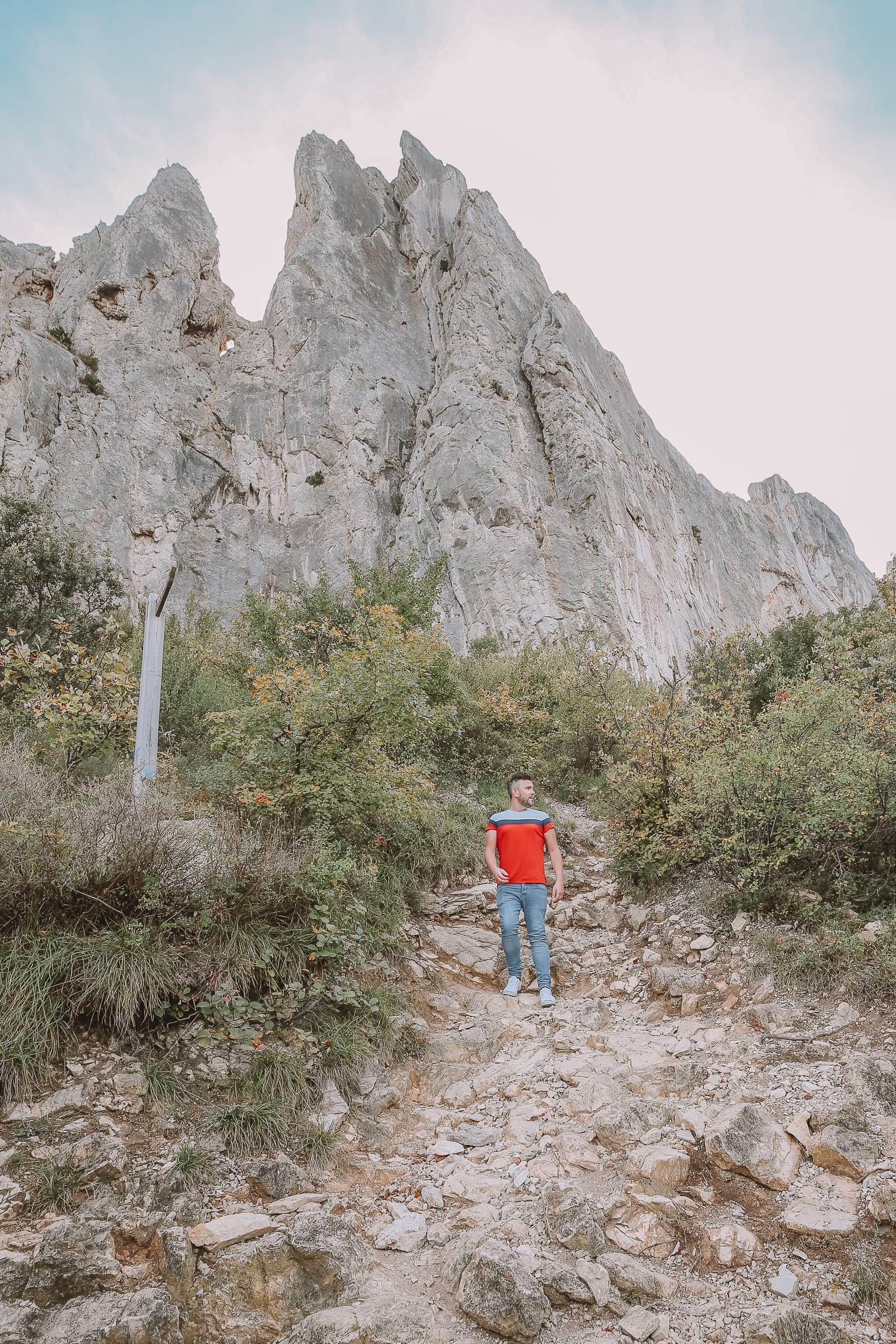 I feel, coming from the UK, you learn to embrace the sunshine whenever it appears. This turned out to be one of those days. 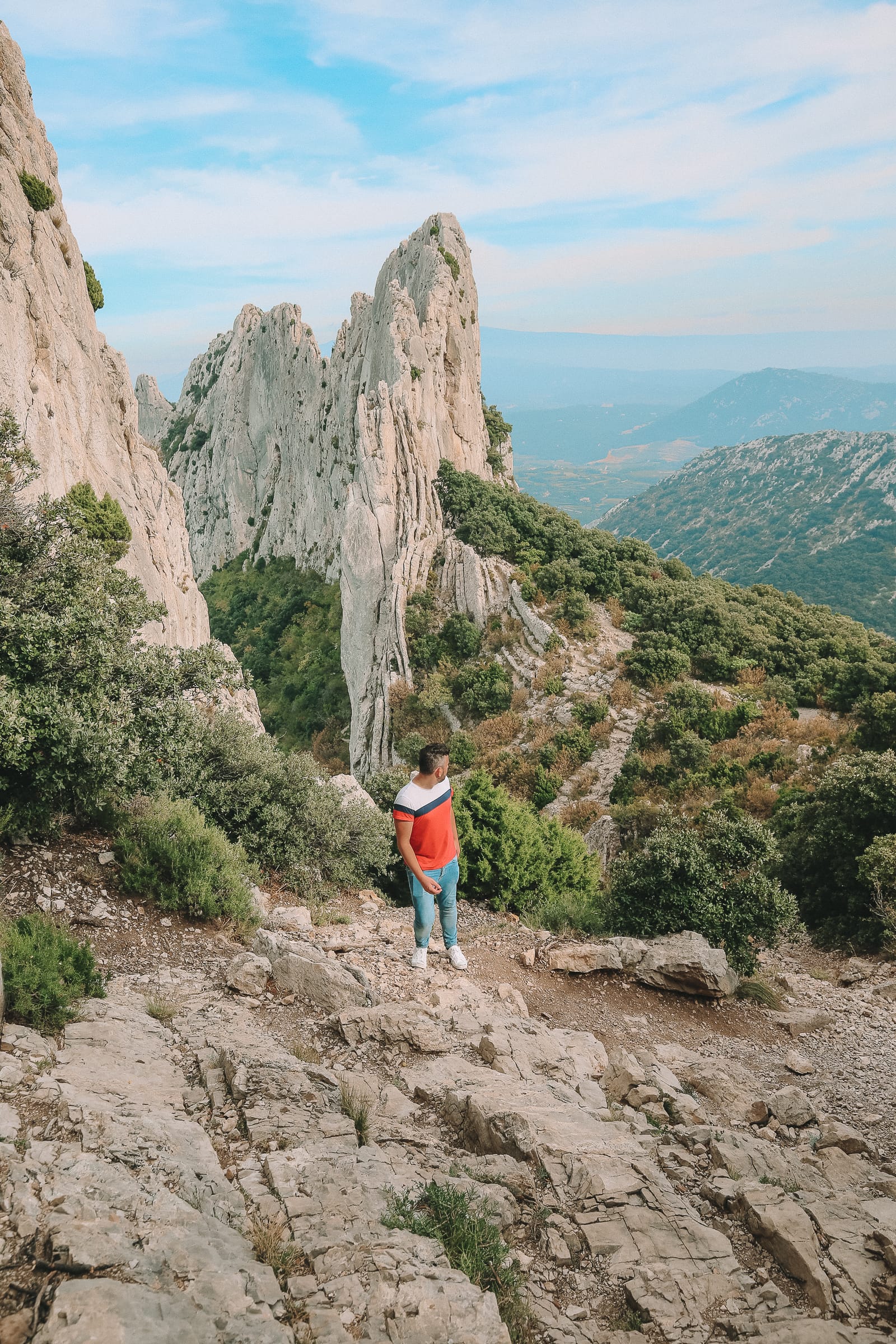 After a little puffing and panting, I’d reached the top! Feeling totally accomplished, it was time to chill and really soak up the views. Surprisingly, the trails were pretty empty too. This made it a lovely relaxing spot for relaxing before meandering back down the mountains. 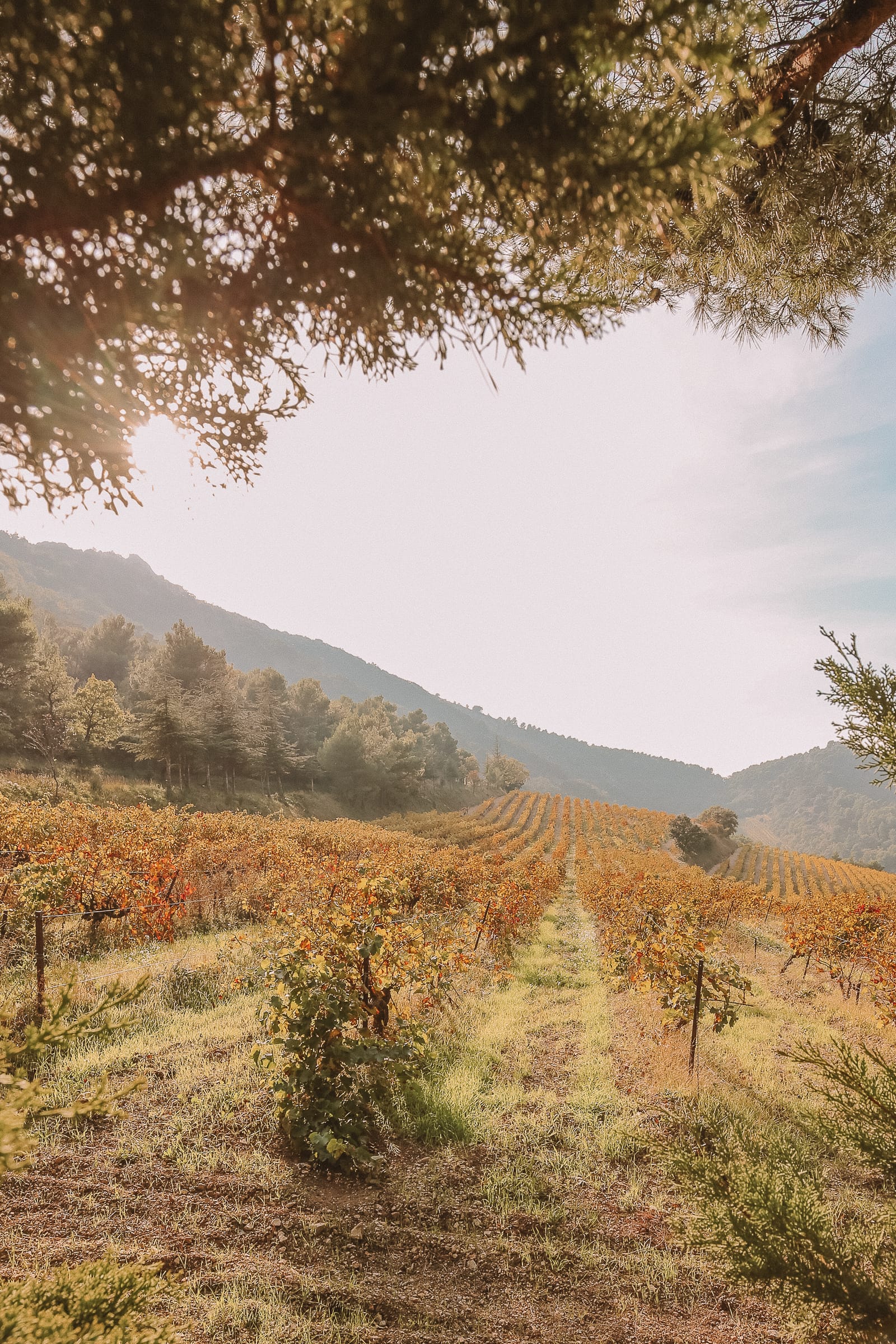 After around 30-minutes at the top, I decided to call it a day and head back down to see if we could catch the sunset at Mont Ventoux. One of the highest points in Provence. 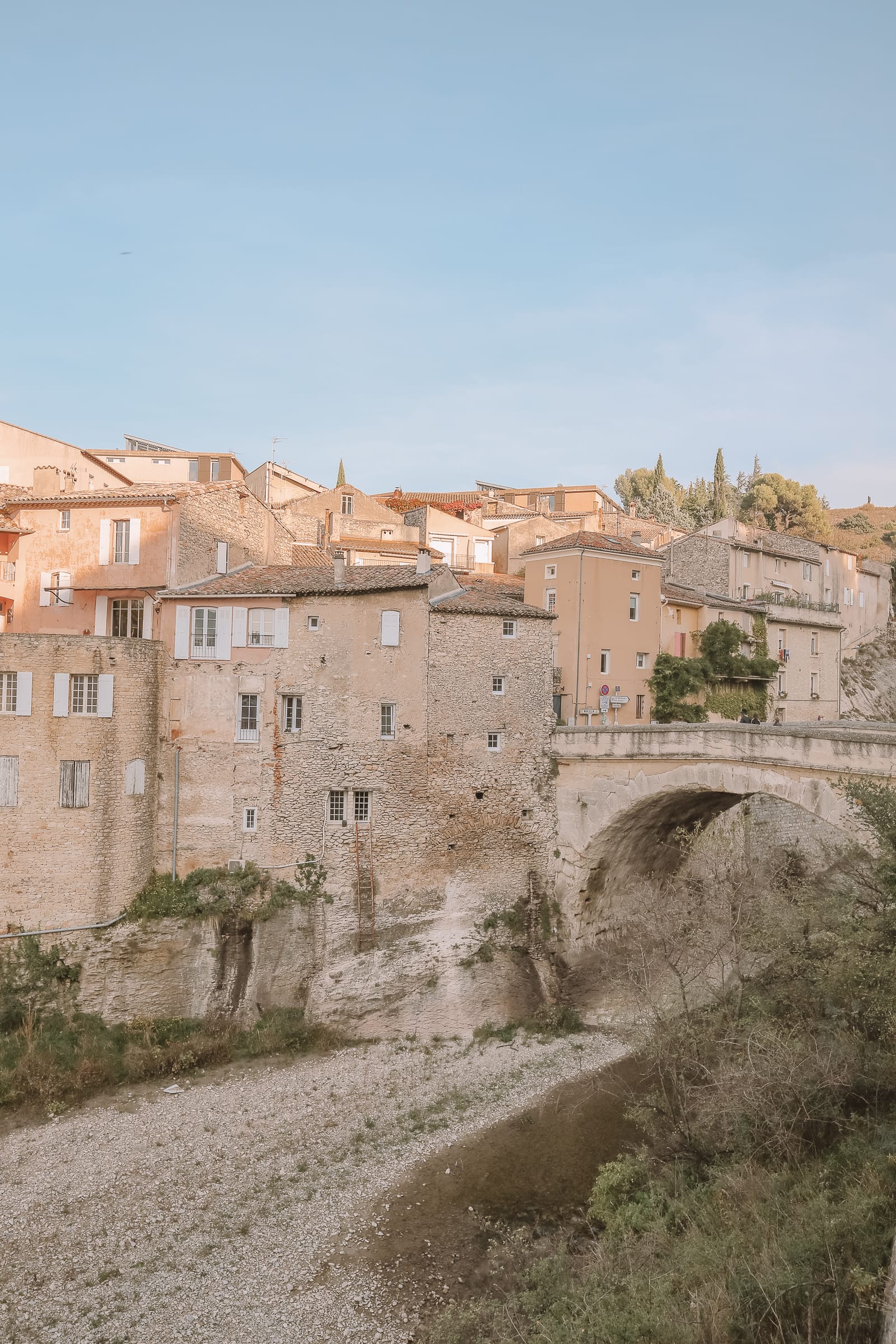 Along the way from the Dentelles de Montmirail, we decided to make a quick pit stop in Vaison-la-Romaine, a tiny picture-perfect comune that has over 2,000 years of history.

Still, to this day, it’s one of only a handful of little communes where you can see Roman, medieval and more modern settlements in one place.

After a little-unscheduled stop, it was back to the plan of getting to Mont Ventoux. 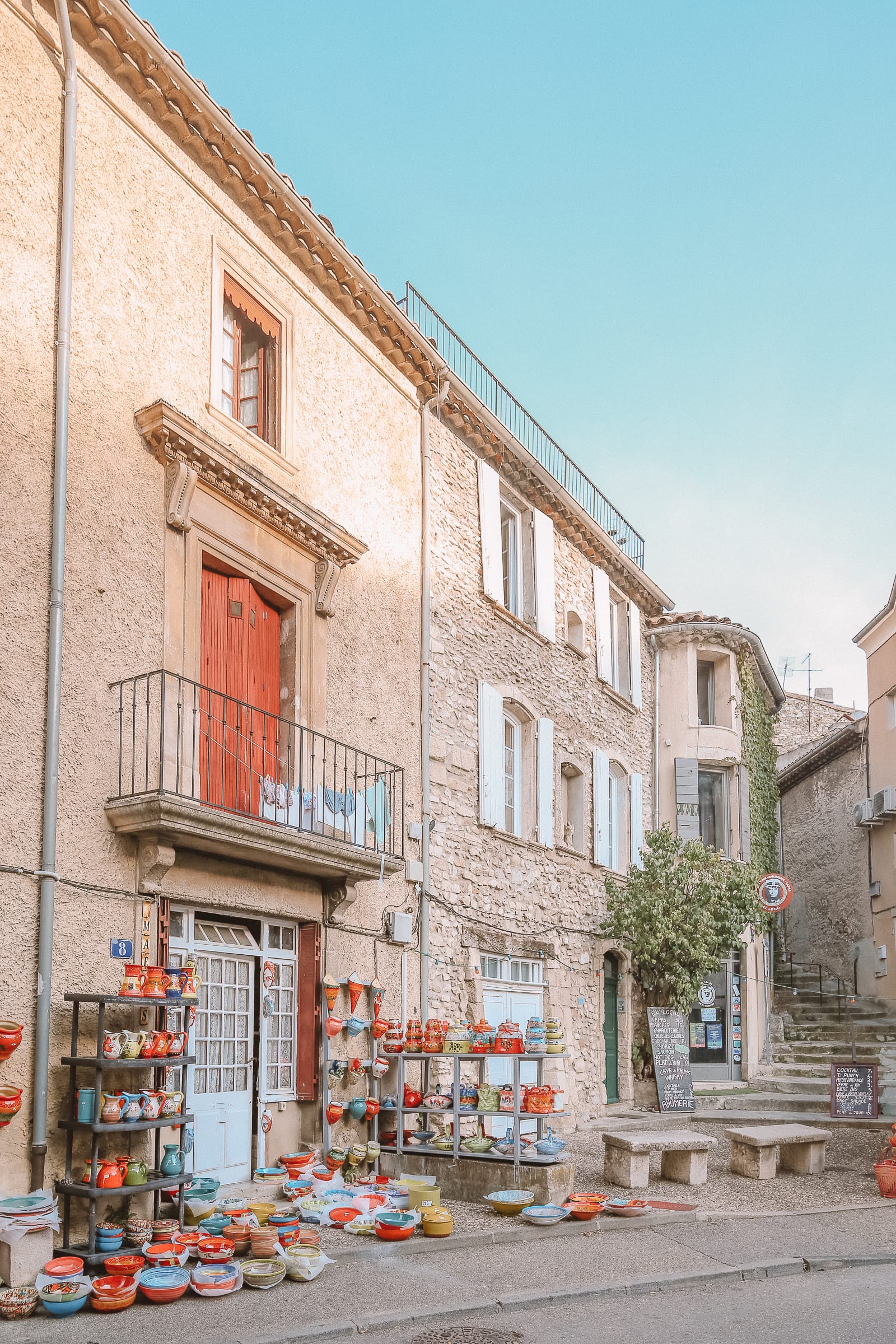 Now, as you gathered by my idea of converse being suitable for hiking, I had stupidly decided not to bring a coat. This in itself wasn’t bad (as the weather was bright and sunny). But so many people kept telling me I was going to freeze at the top of the Mont Ventoux. Pffftttt, what did they know… 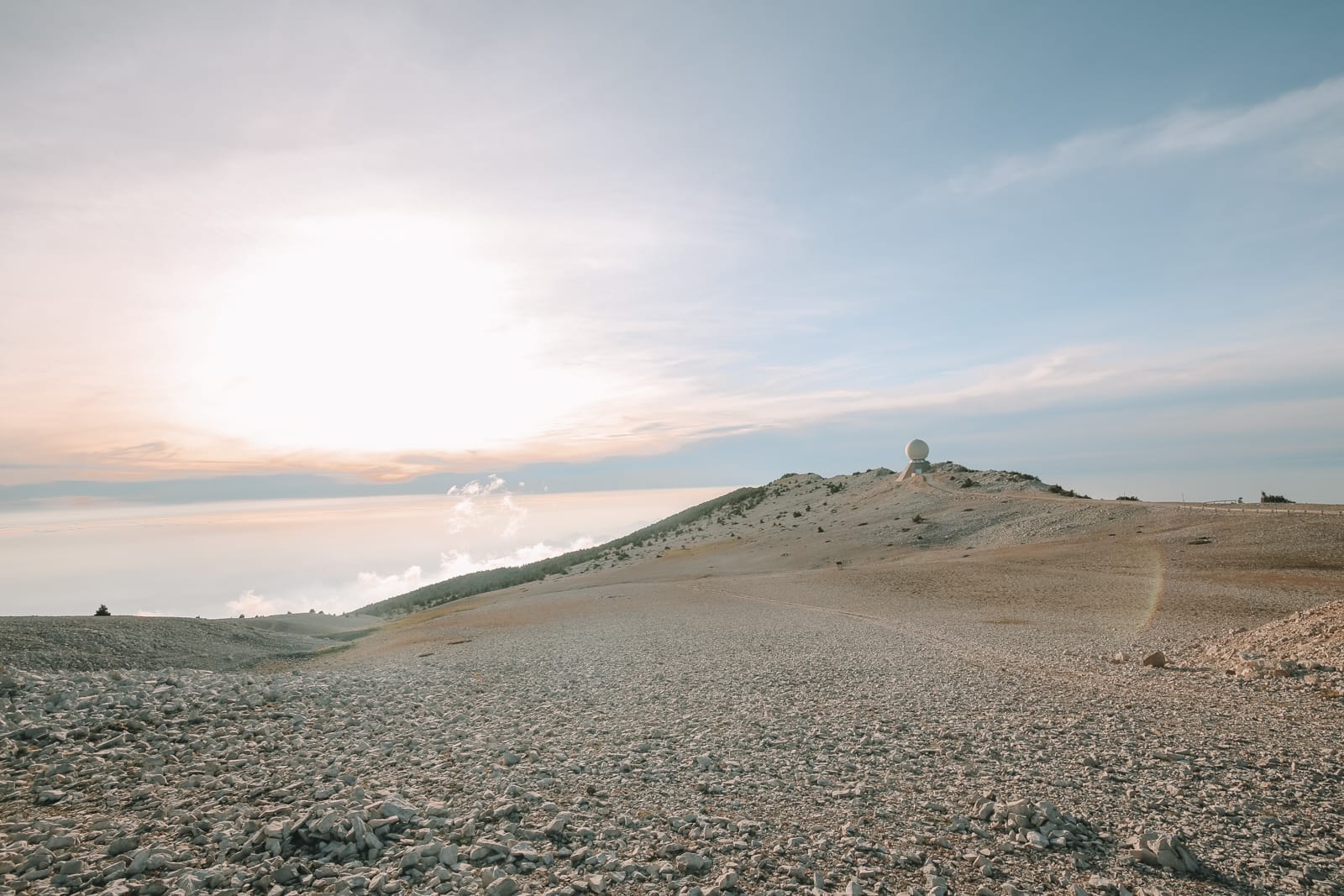 In fact, I should have realised from the name, with Ventoux roughly translating to the wind, or windy. Apparently, the local authorities have even recorded winds of 320 km/h (200 mph) at the top. Now, that would be chilly.

Thankfully, the wind was taking a break today but the chill factor was still there. Within around 2-minutes of being outside, that chill had got me! 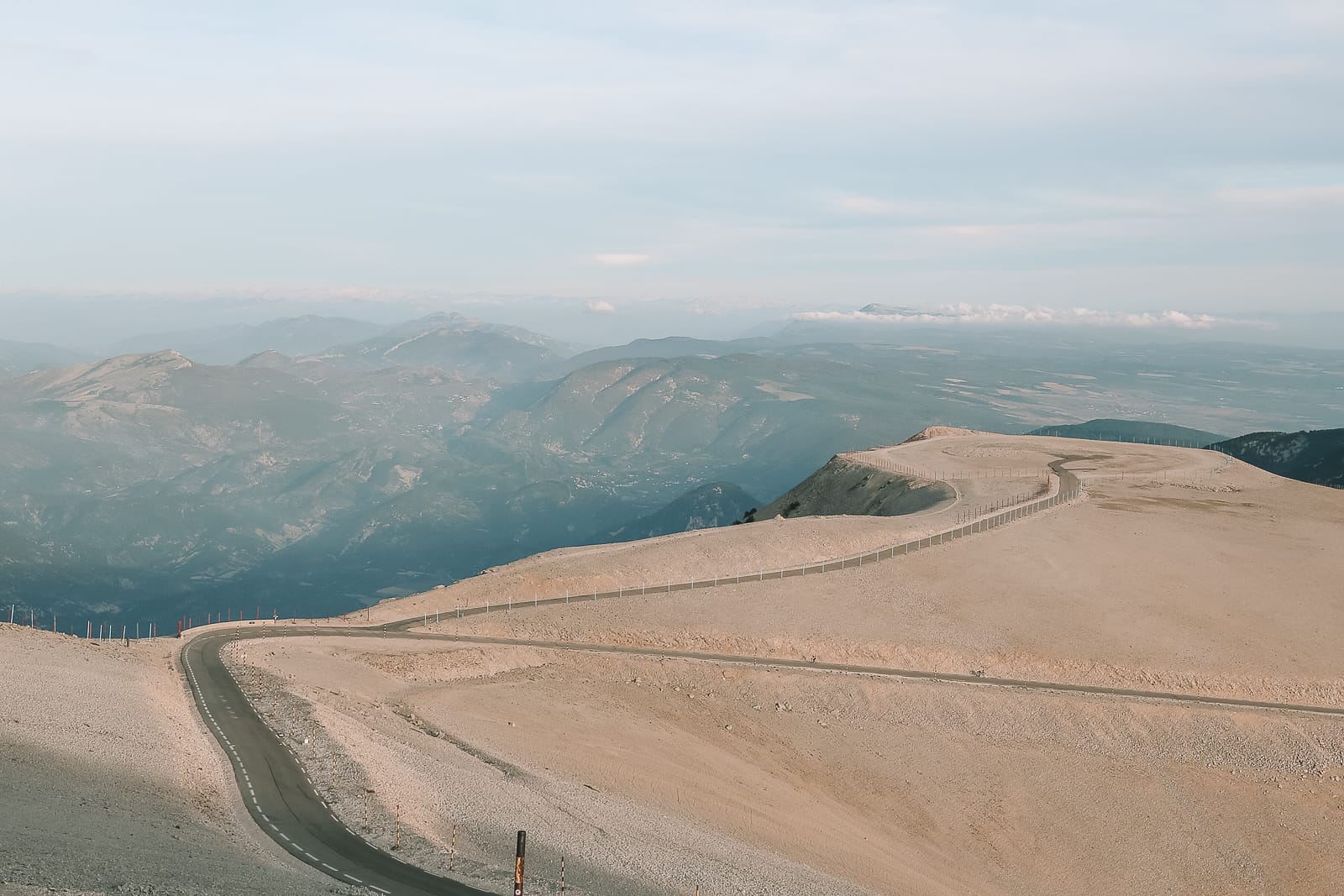 Apparently, the mountain itself is a part of the Tour de France… even though it looks almost impossible to cycle up! I struggled to even walk parts of the summit, let alone bike from the bottom. 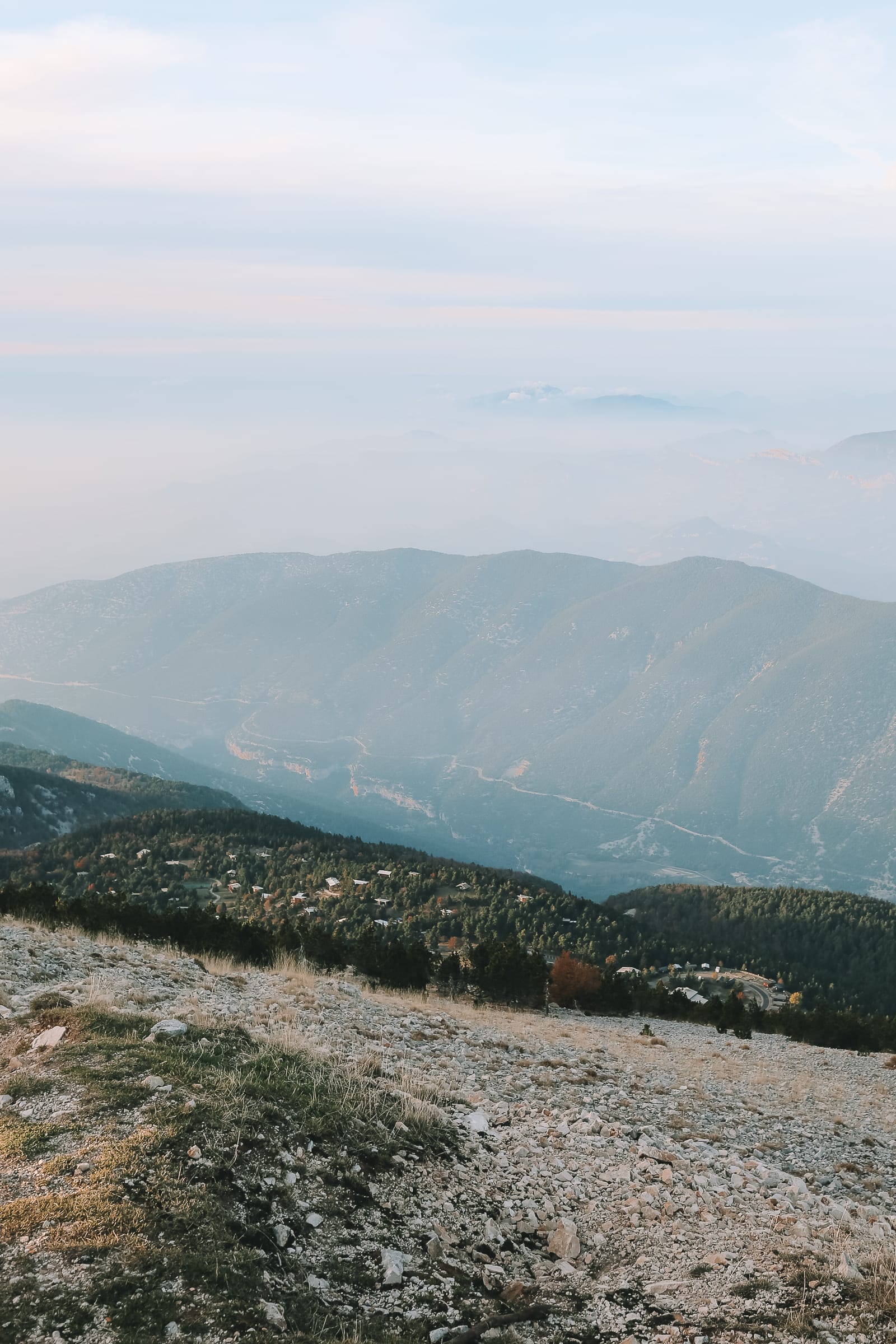 As the chill took hold, I decided to call it a day. Which was well timed really as we were just in time for dinner at Restaurant Le Mesclun in Séguret.

On arrival, in the dark, to Séguret. I quickly realised how special this little village is… it was gorgeous! How had I never heard of it before? 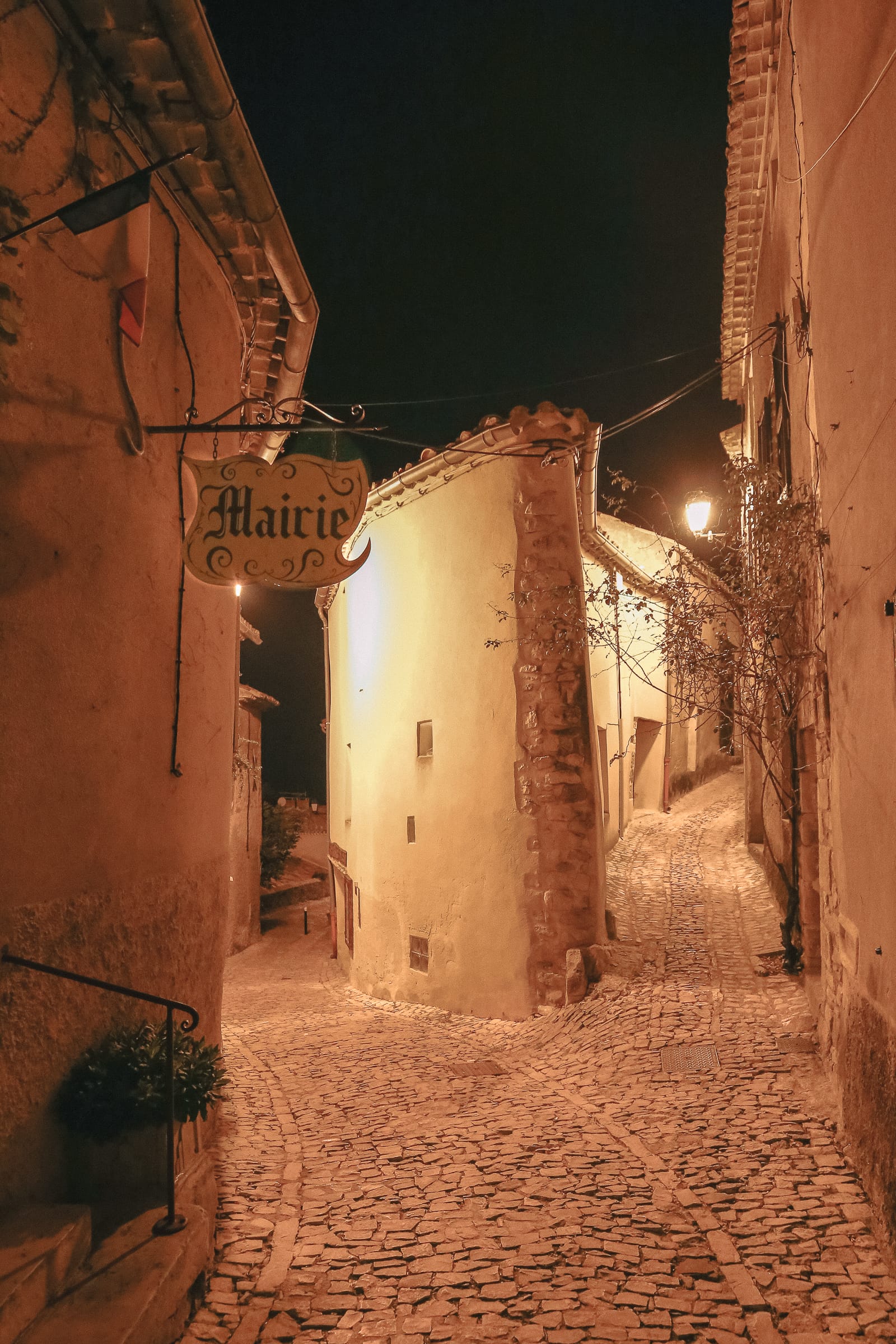 After a few minutes of exploring, along the way to dinner, I quickly made a promise to myself that I had to return first thing in the morning. It was just too beautiful to miss in daylight. 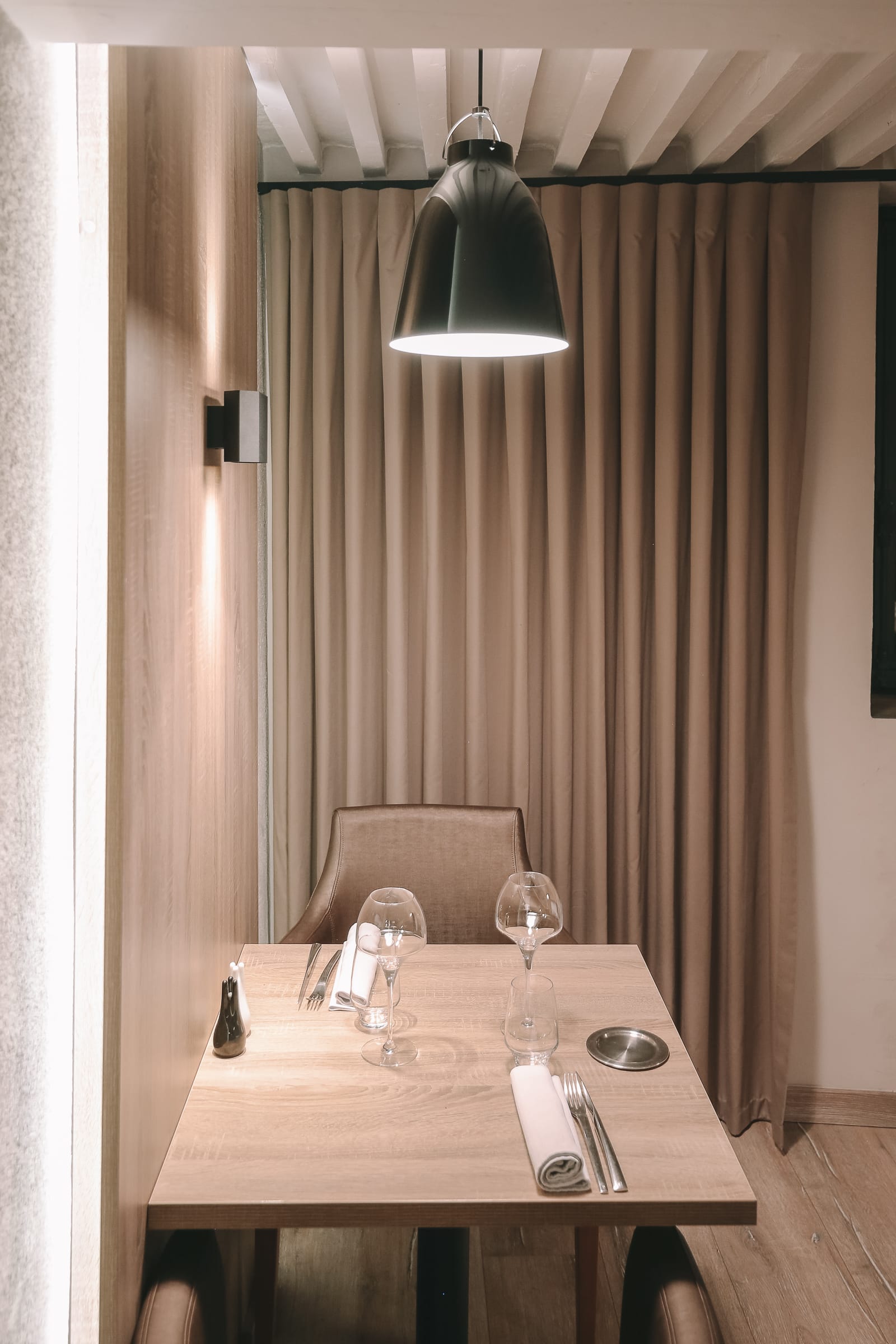 Distractions put aside till tomorrow, we finally made it inside Le Mesclun – a stunning and intimate restaurant that has a flair for serving some pretty incredible dishes.

For starters, I went for a French pate which was creamy and smooth, whilst for mains, it was a juicy pork, thinly cut potatoes and basil, which went down a treat.

By dessert time, my mind was already made up on crème brûlée. It’s one of my favourite desserts anyway but hats off to Le Mesclun for this pretty incredible presentation.

I know it probably shouldn’t matter that much but I’m just such a sucker for presentation. 😀 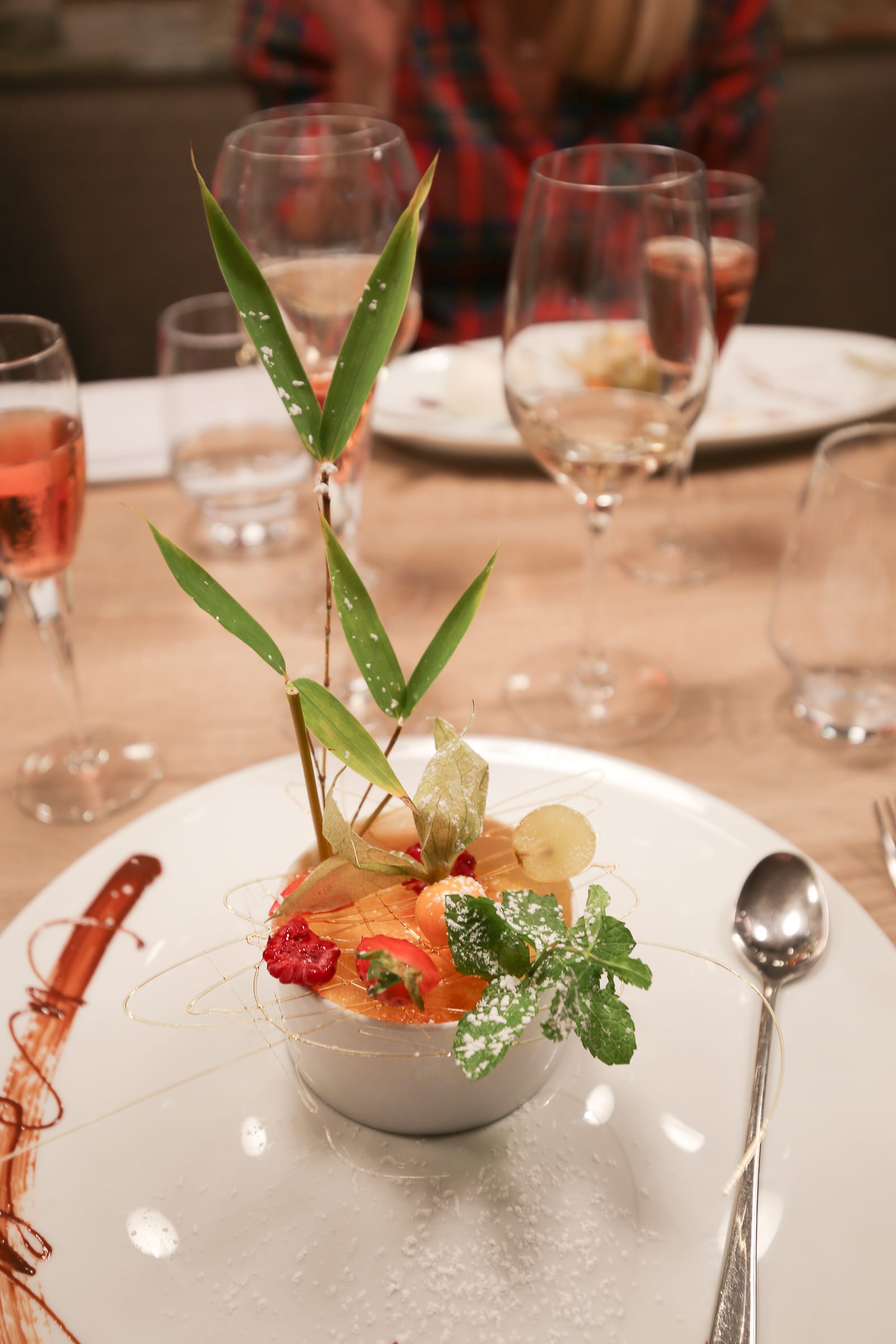 All full and nice and toasty, it was time to check into Domaine de Cabasse which was a few minutes from the restaurant itself.

Again, after a long day exploring, my head hit the pillow immediately upon entering my room. Provence had so far shown itself to be more than just the beauty I’d imagined, but also full of surprises that made me even more excited to explore more of the region over the next few days. 😀 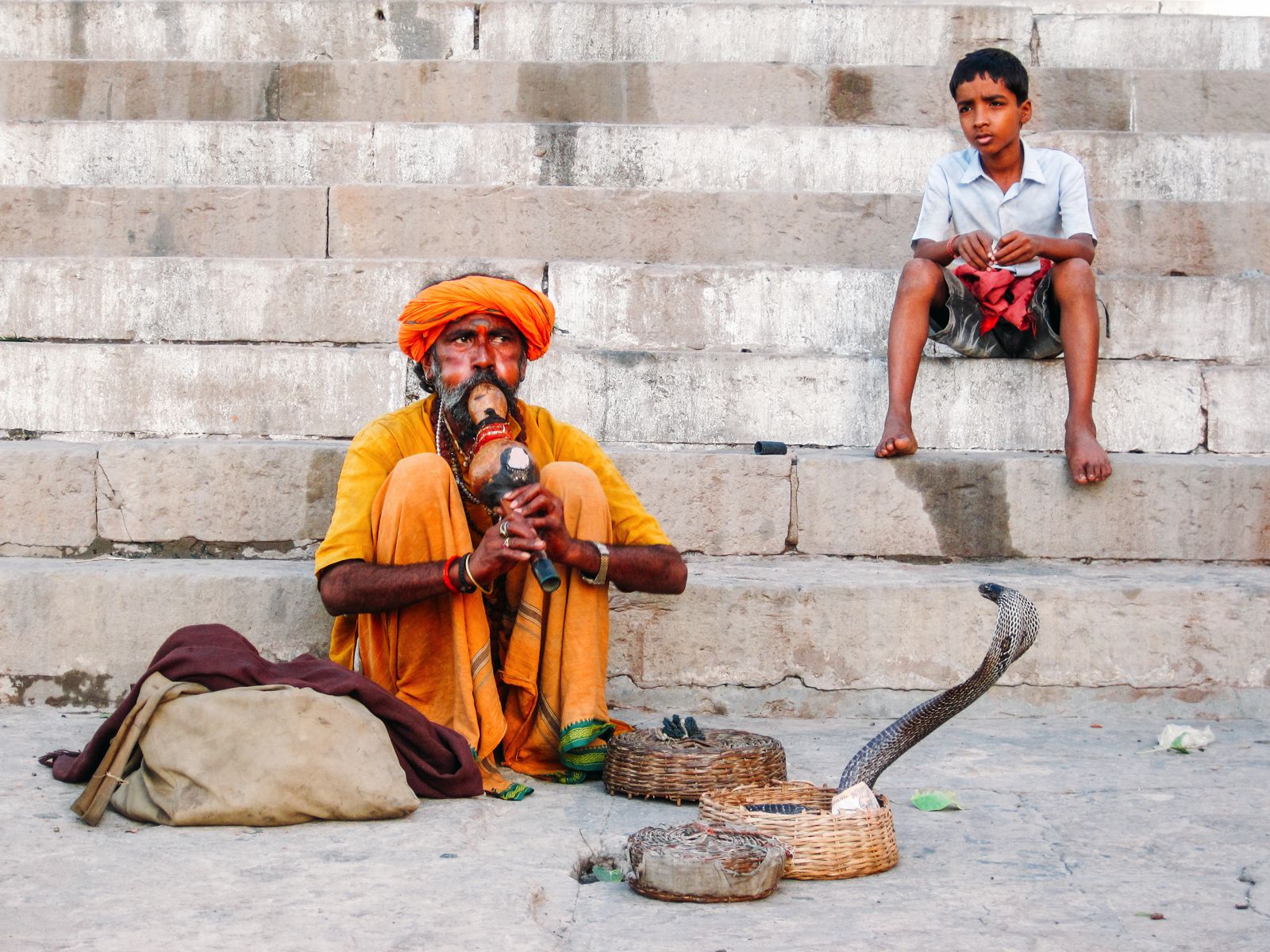 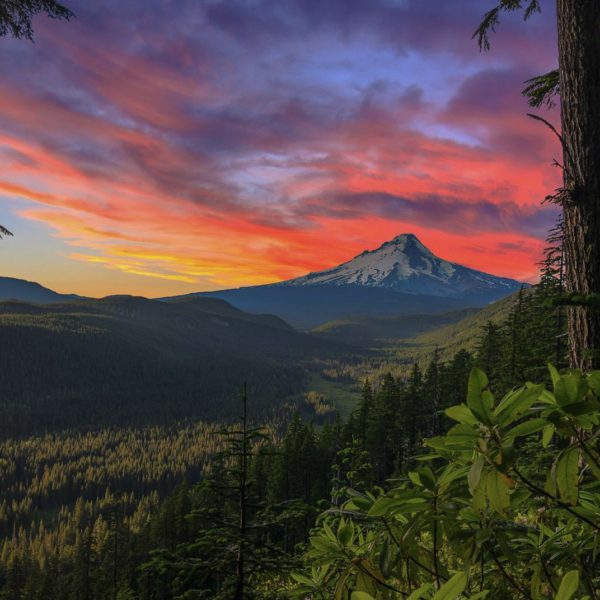 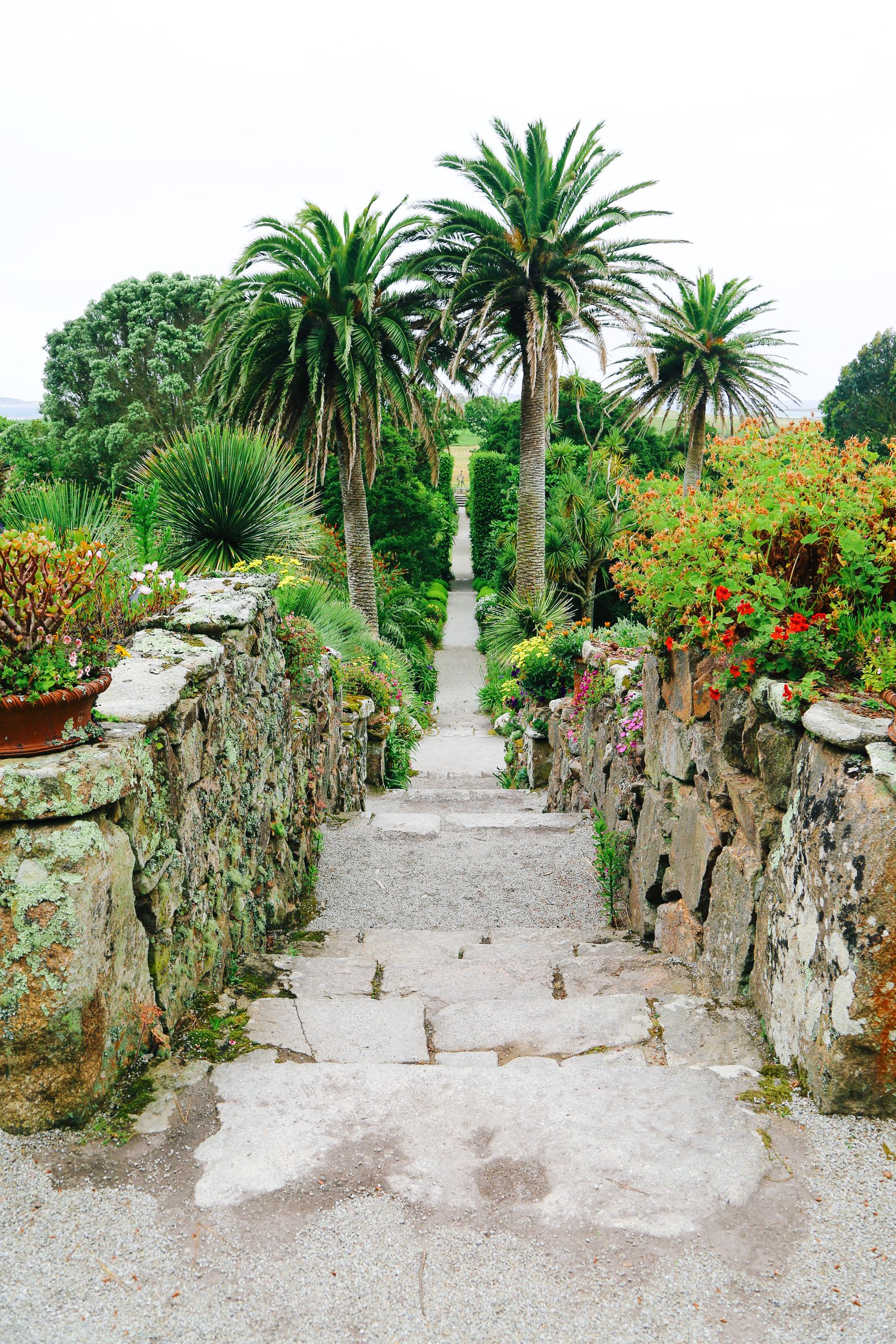 A Day On Tresco Island!