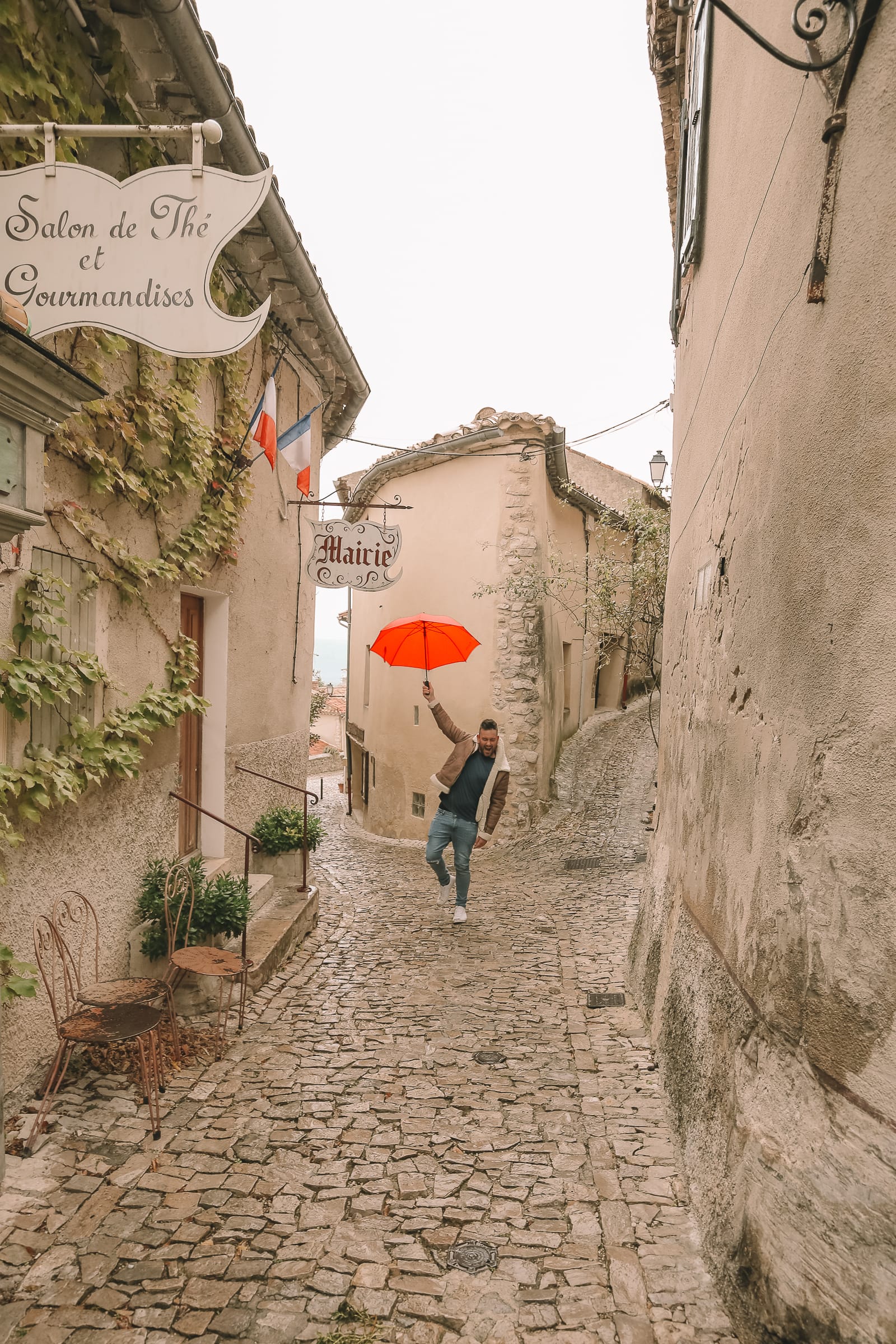 After hiking and exploring Mont Ventoux yesterday, today was going to be a little more chilled. Especially as the weather turned a little grey, which made for the perfect excuse to seek shelter indoors and sip on some local wines. 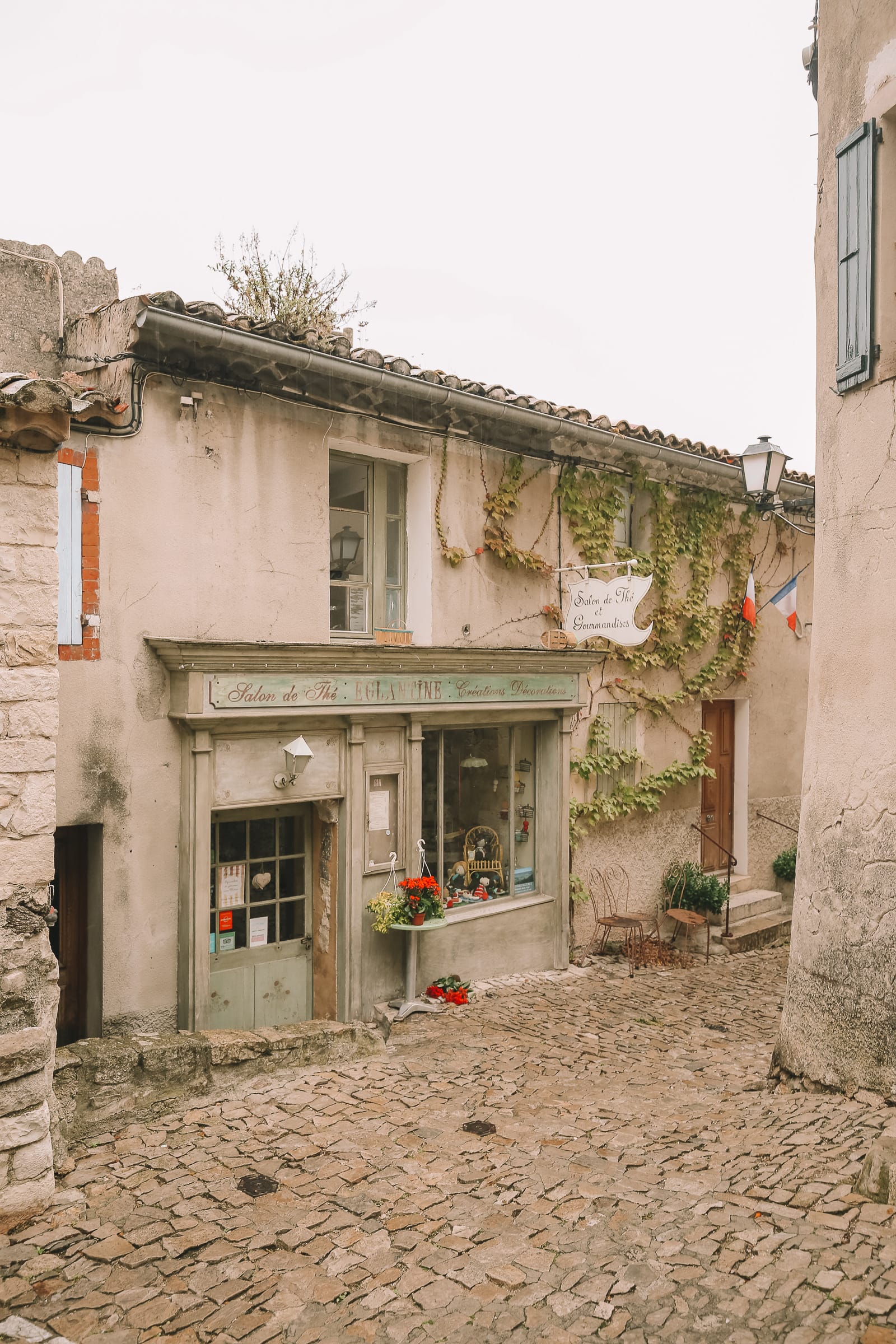 Before that though, I was still determined to get back to Séguret after our fleeting little visit for food yesterday.  By the time I left the hotel, the rain had fully set in.

But again, being a Brit you learn to take this in your stride and just roll with it. After all, holiday plans can’t go out of the window because of a little bit of rain. (We’d never get anything done back home in the UK if we were worried about a little rain. 😆)

Strolling around the streets of Séguret, it quickly made me realise how little I knew about some of the smaller towns in Provence.

There seem to be so many hidden gems, simmer just beyond the glittery surface of the more famous spots. The department of Vaucluse (in Provence) is a treasure trove of pretty little communes to see, which are surprisingly easy to find if you’re exploring in a car. 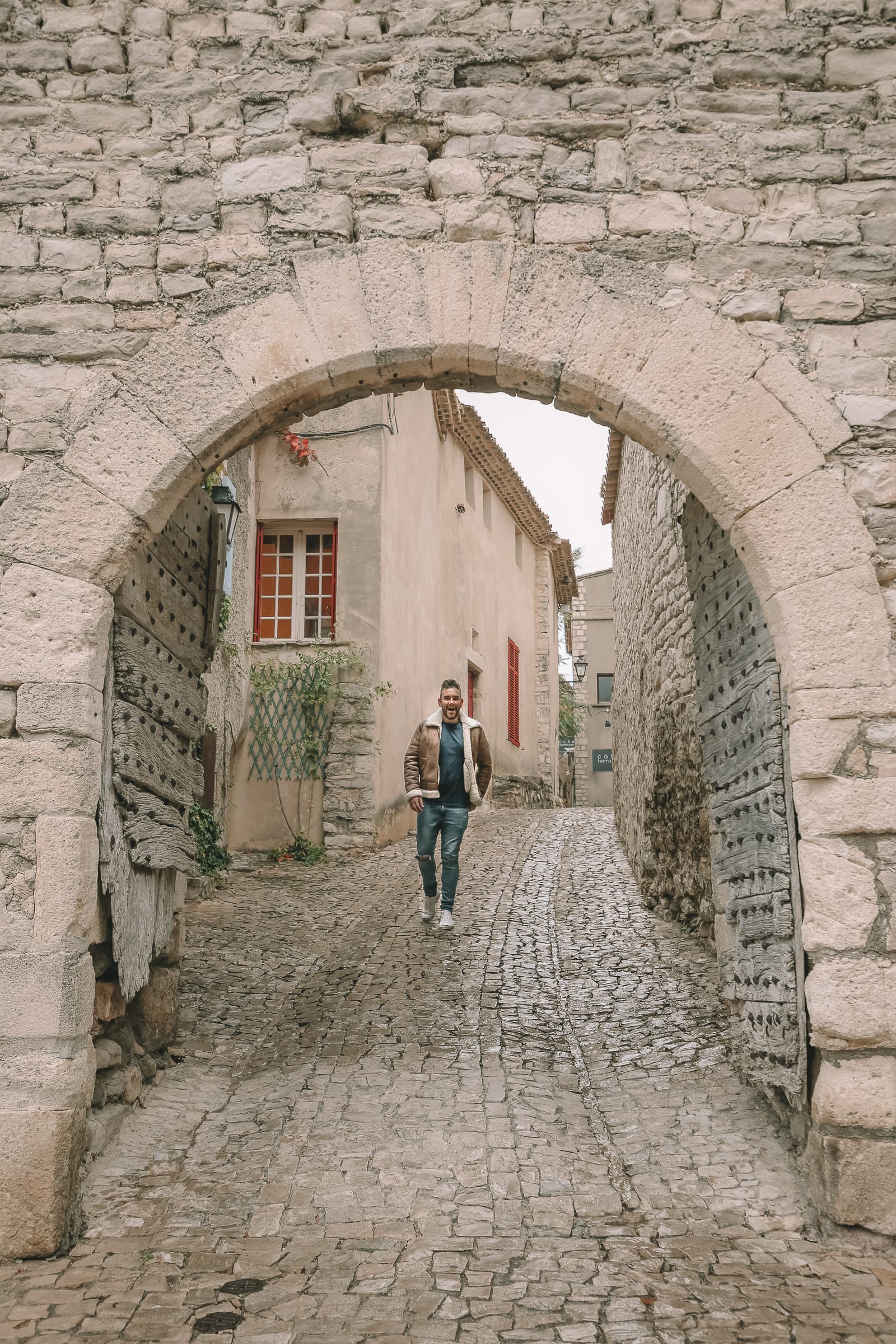 That’s the beauty of Provence really.

After spending around 45-minutes in Séguret, we were starting to get a little late for our next pit stop. Something I was really excited for… a vineyard tour in a vintage Volkswagen Combi! 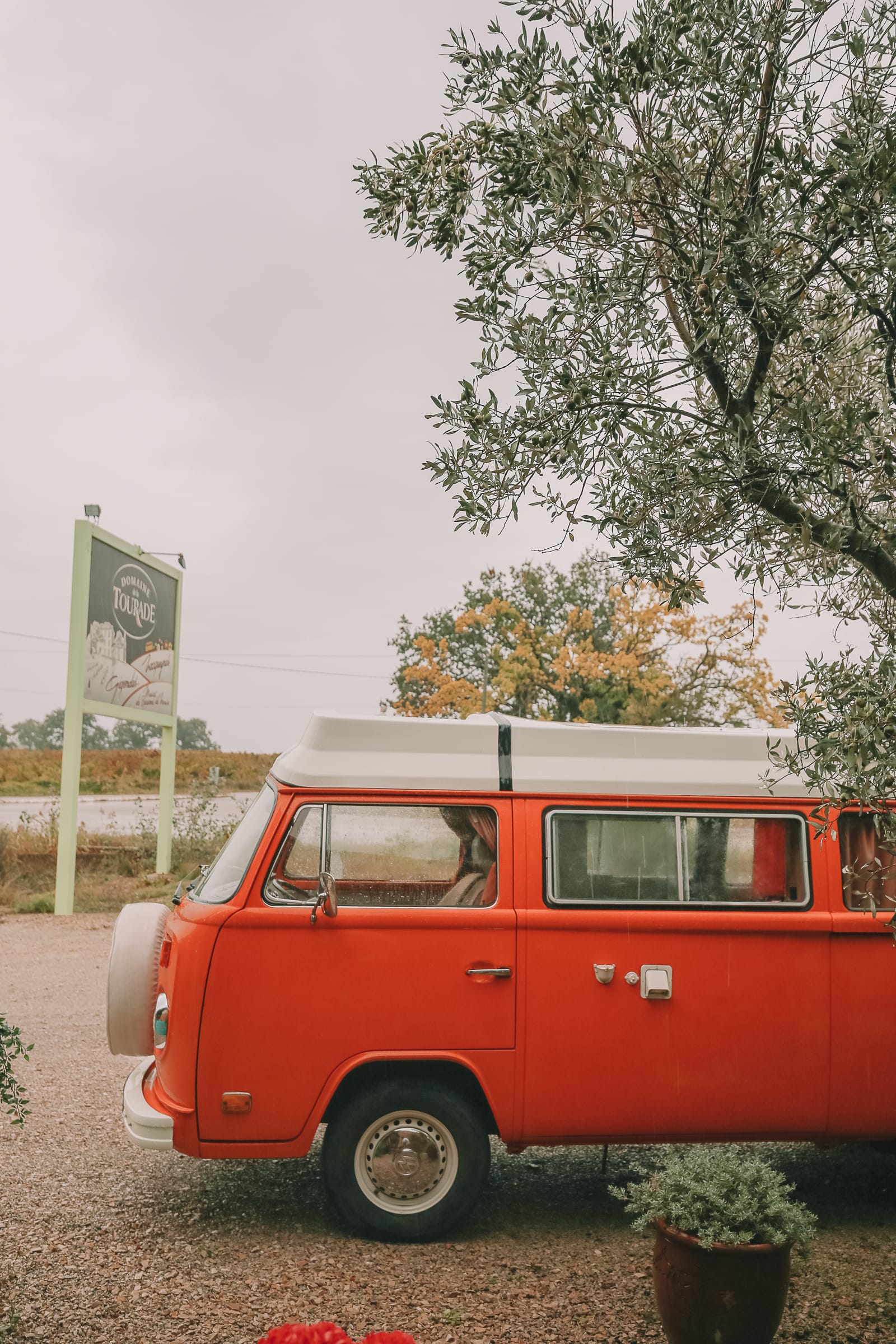 I could already see the vintage VW as we pulled up to Domaine de la Tourade. It was a sight to behold and possibly one of the coolest cars I’d seen on this trip. (I have a soft spot for them, to be totally honest)

After meeting with the team, and with the rain getting a little heavier, we decided to actually have a little wine-tasting in Domaine de la Tourade rather than get soaked in the vineyard itself.

On a nicer day, we’d have had some wine in the vineyard itself, but the rain had other plans for us.

Thankfully, wine tastes as good inside as it does outside 😄 and so we got to learn much more about the local wine from this area (by way of tasting it, of course).

After working our way wine through a fair bit of the vineyard’s offerings, the rain began to appease a little, so with that, we hopped into the VW with our designated driver (who’s also our guide) and headed off through the region. (Don’t worry – none of us wine drinkers would be doing any driving). 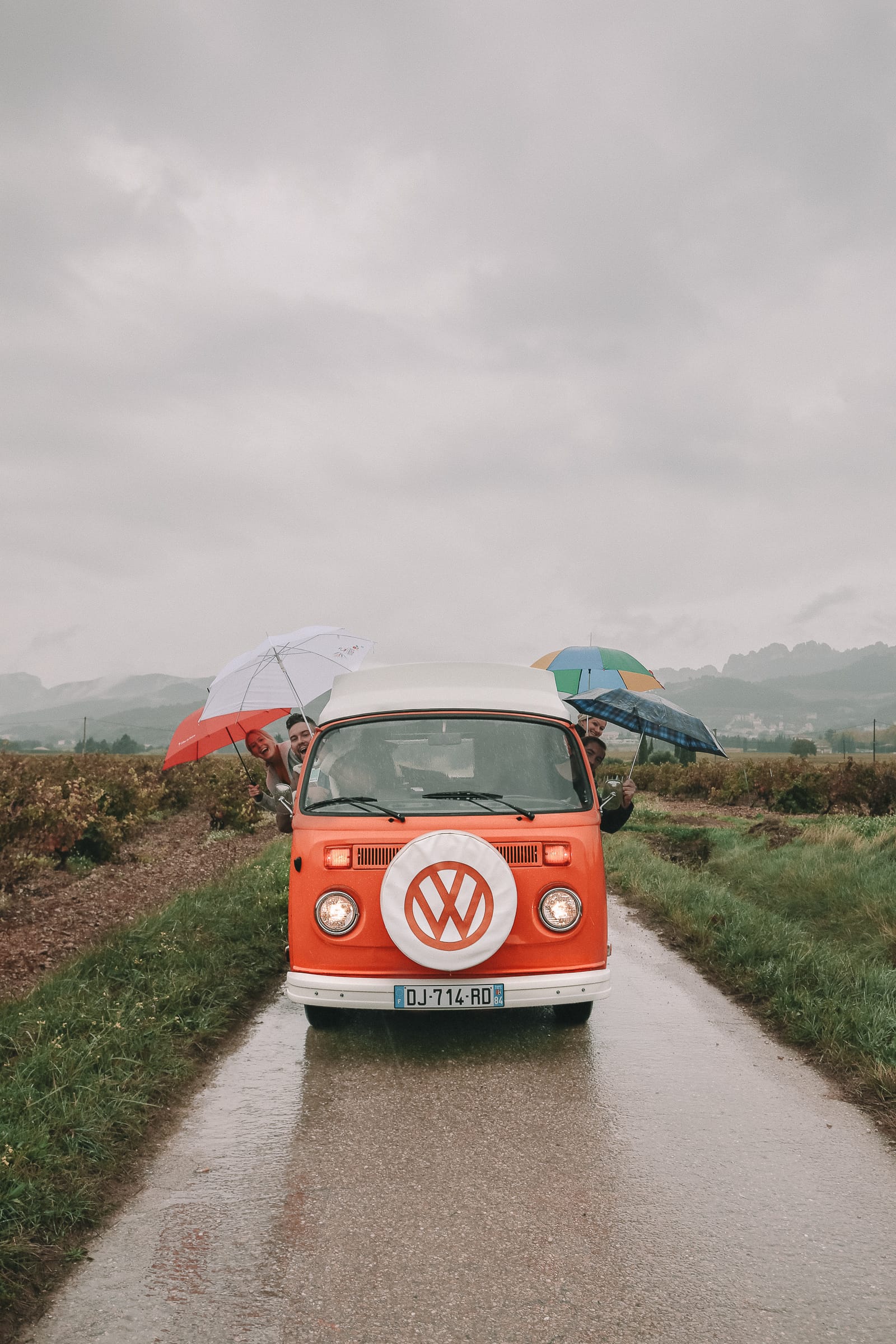 It was a great way to start the morning and just enough to work up a hefty appetite for lunch.

As we were short on time, lunch was going to be a slightly more efficient affair.

We stopped off at A Table in Bédoin which was perfect for lunch. Still full from last nights feast, I went for a local fish main course served with edible flowers and a herb reduction. It was so yummy and a light change after my red meat mains from the days before.

With time ticking away, it was time to make a dash over the vineyards of Château Pesquié through Flassan. Now, this family estate has been making award-winning wines for over three generations and has become known for its rather eco-friendly approach to winemaking. 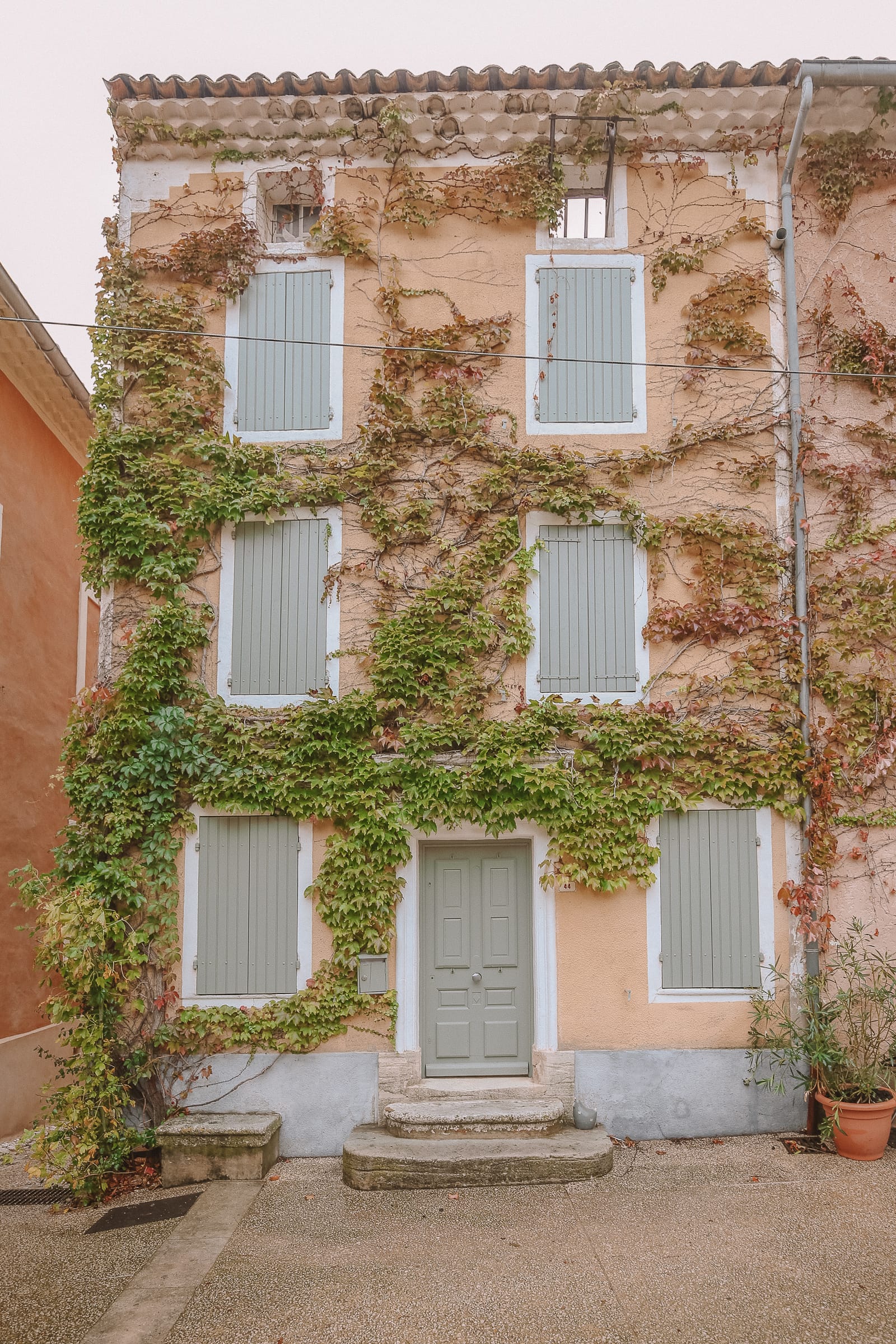 After a fleeting tour of the cellars, we had a little dabble at a tasting. And by tasting, I actually mean drinking! I mean, we were in Provence and a day filled with fine wines was something I couldn’t (and wouldn’t) say no to.

One of my favourites has to be the pale Terrasses Rosé. It was a much lighter rosé than I’m used to drinking but was so fresh and light. I loved it. 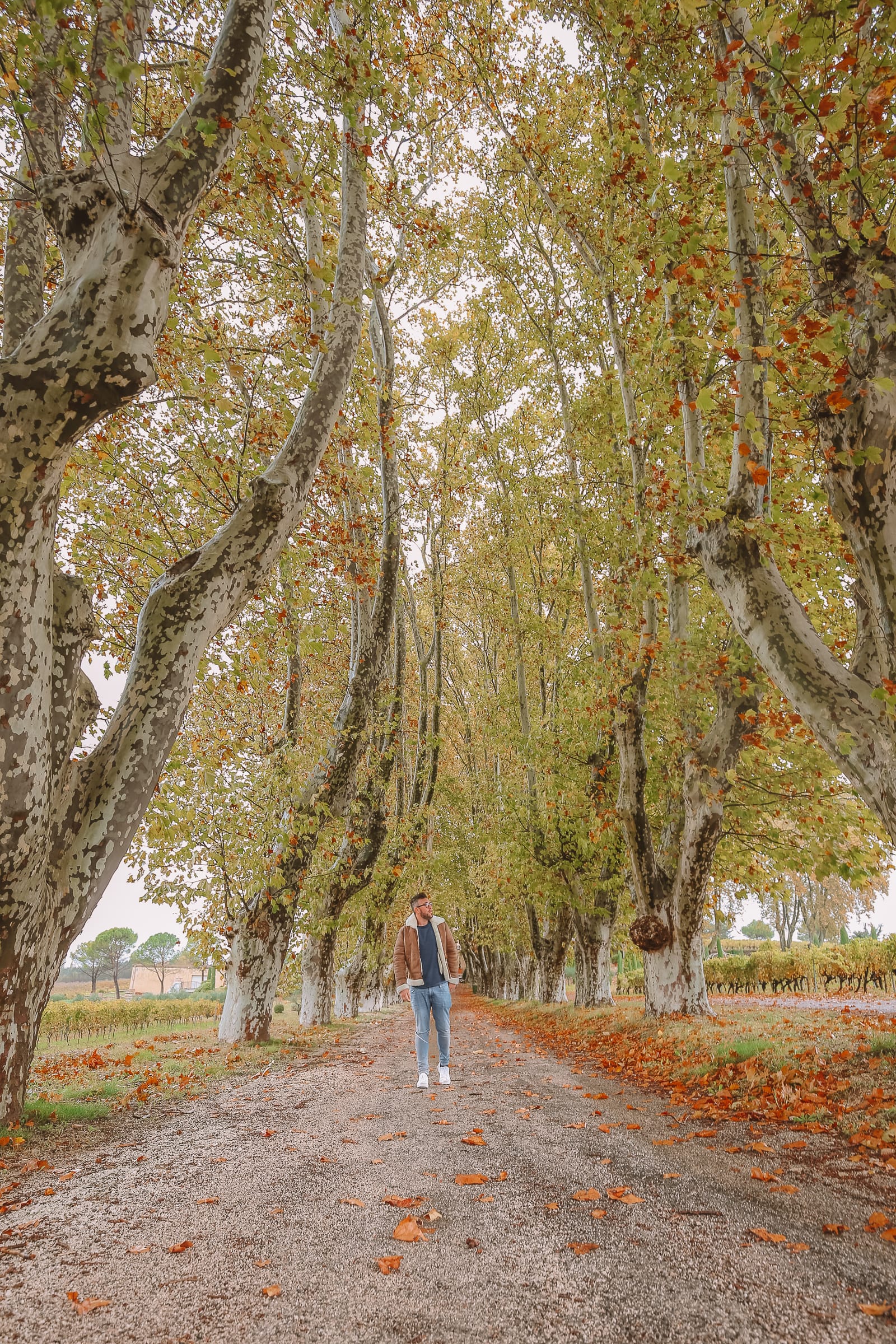 Sipping on wines, conversation and laughter free-flowing, we lost track of time and didn’t even realise we were running late (again 😄😆).

Eager to get back on track, we hopped back in the car (with our designated driver) and headed straight over to Carpentras, via a little pit stop in Flassan for a little wander around. 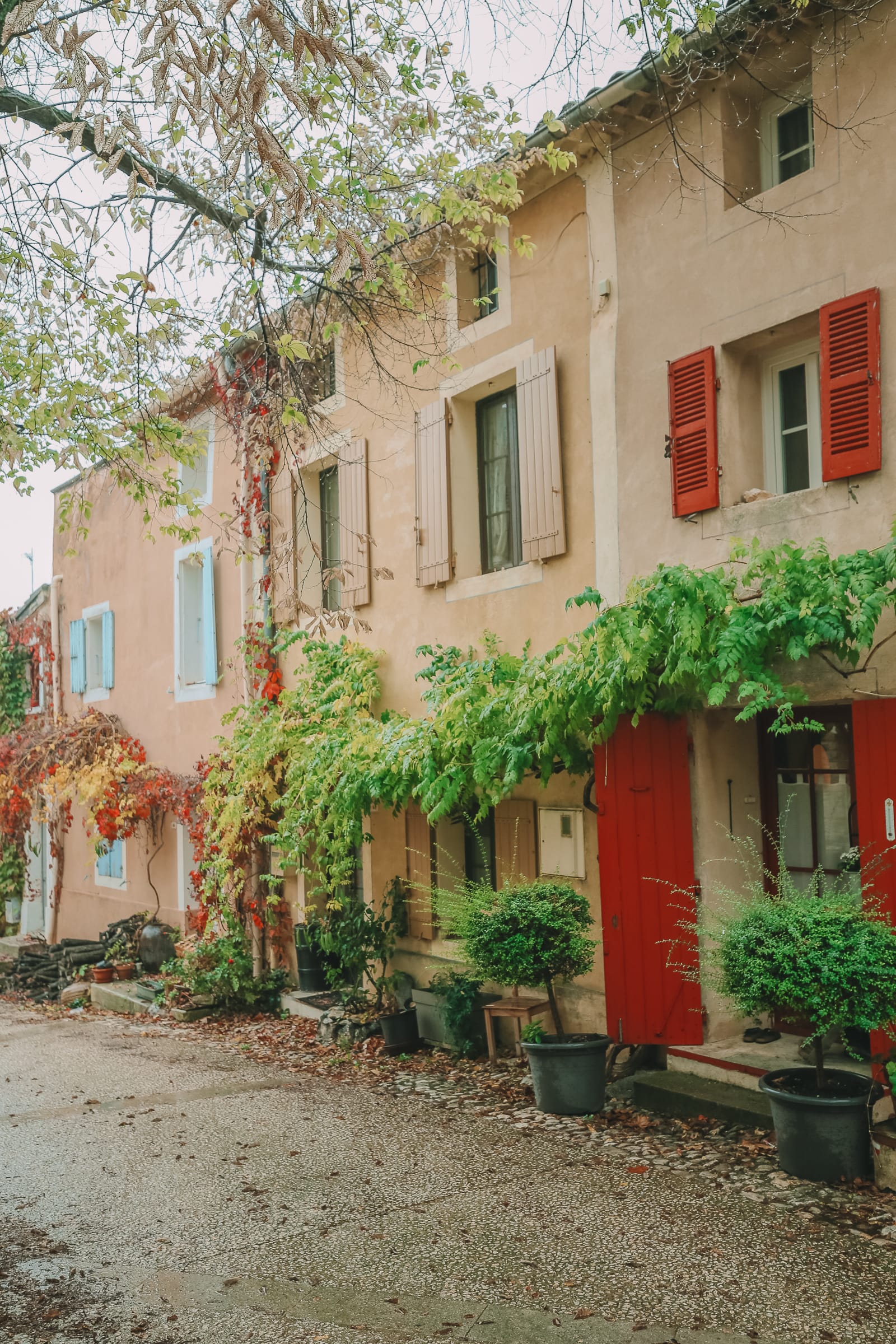 With over 800 years of history, this sleepy little commune was so beautiful to see – it almost reminded me of a town out of Beauty and the Beast. It was a perfect little stop to stretch the legs and blow the cobwebs out before heading into Carpentras itself. 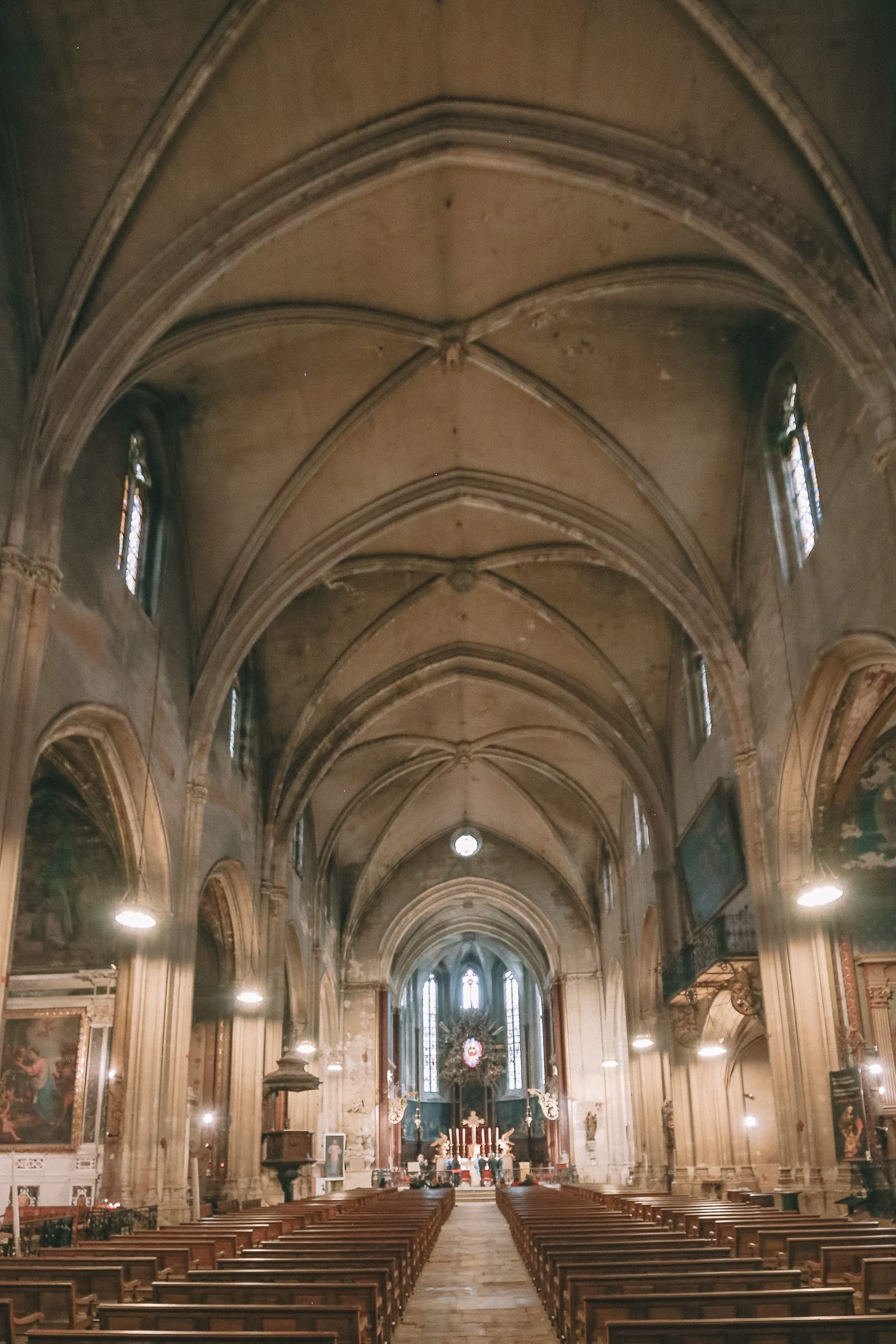 Now, the thing that intrigued me most about Carpentras (beyond the history and gorgeous church), was Patisserie Jouvaud which I’d head so much about. Suffice to say, when cake is involved, I tend to know (or indeed, intend to find out) a lot! 🤣 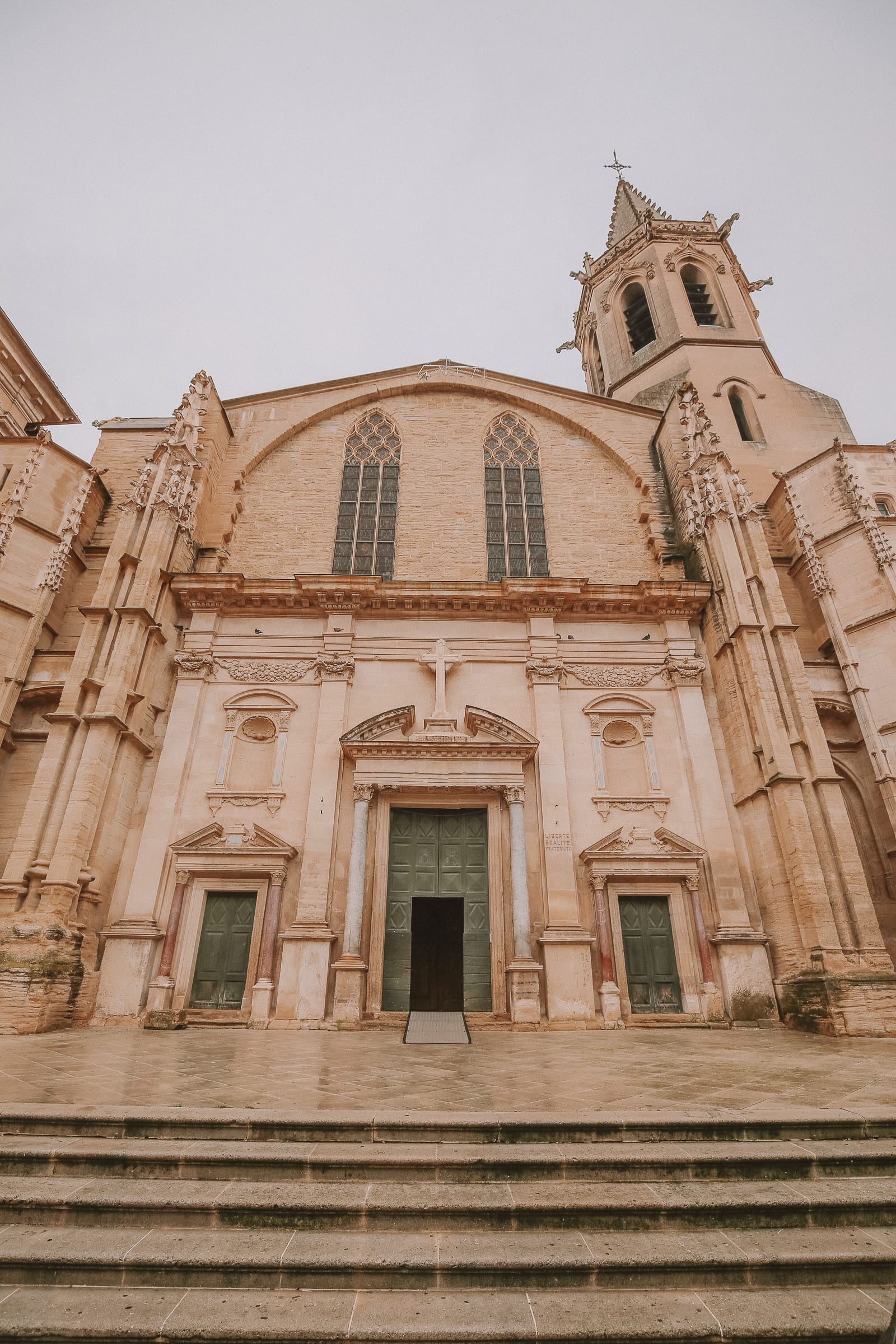 After a little stroll through the town (and a few wrong turns) we finally found the picturesque (and pretty busy), Patisserie Jouvaud.

Based on Rue de l’Évêché,  Patisserie Jouvaud is a stunning little family run patisserie that’s been running for over 80 years. 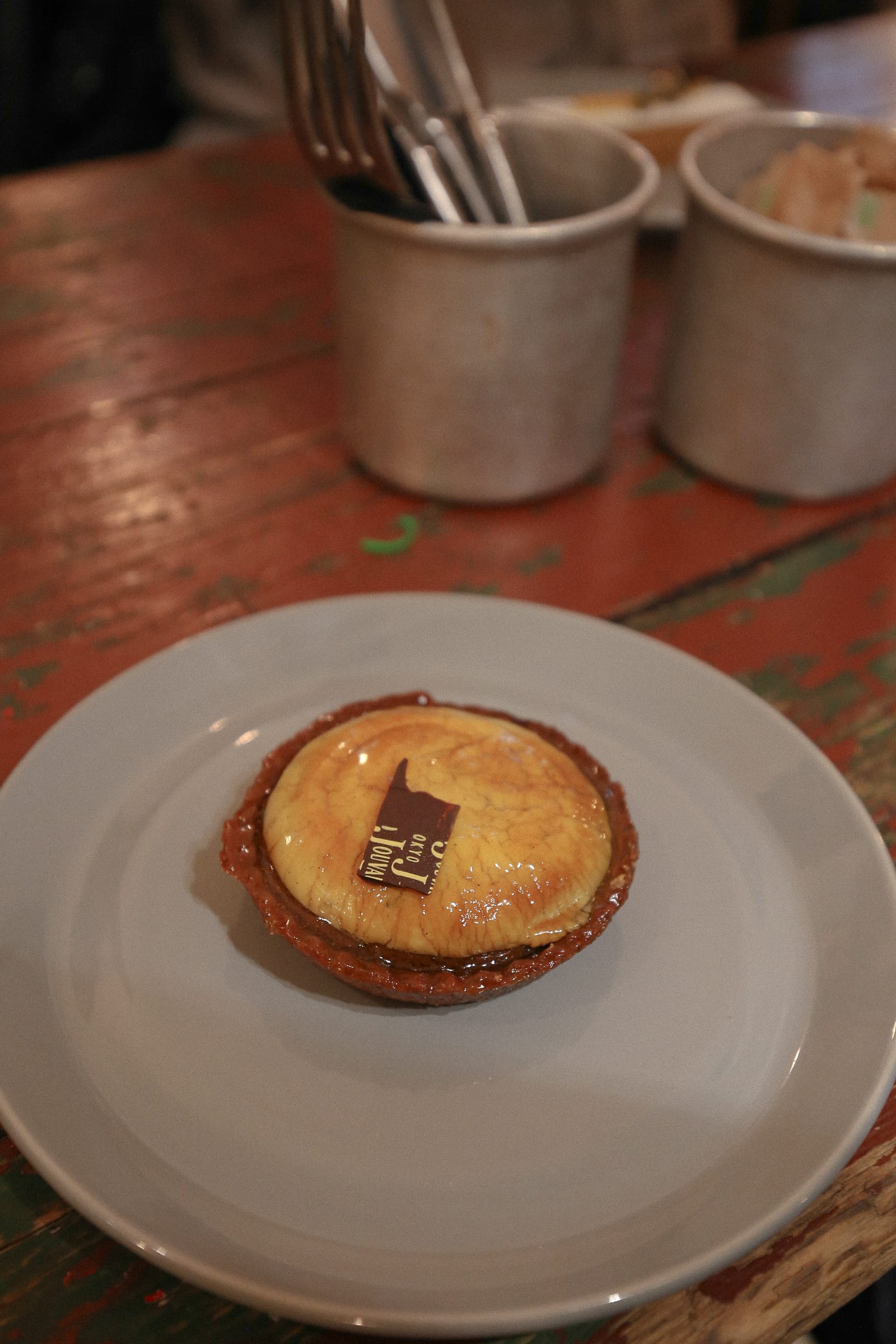 They have four shops in total, with the latest one just opening in Tokyo! It really has made a name for itself… and rightly so! It’s absolutely delicious.

Once inside, I had to order one of their home-made tarts. I mean, it would have been rude not too! 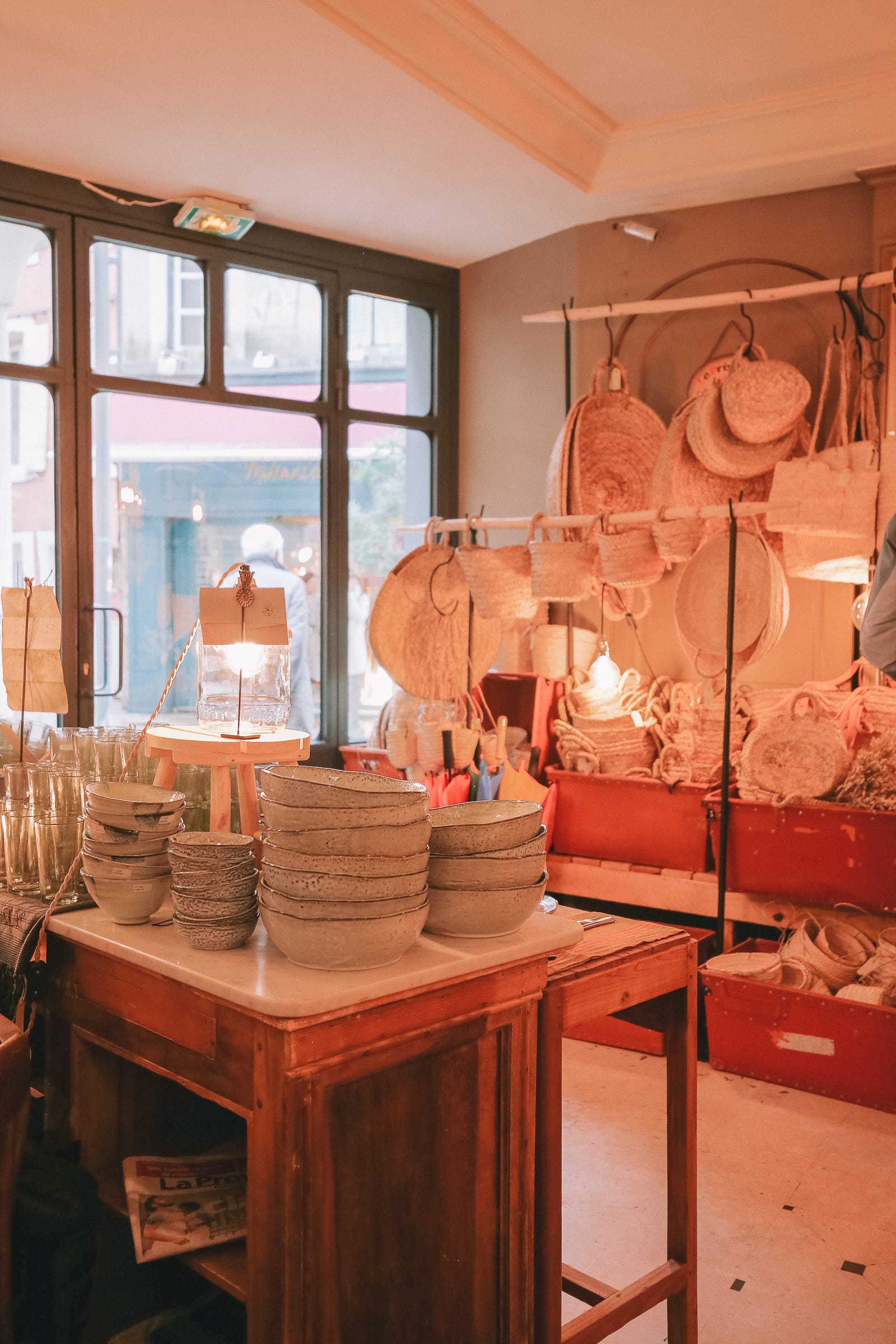 Everything was just so pretty and quaint, it’s a must-eat spot when visiting Carpentras, just make sure to go at off-peak times as it can fill up very fast.

After filling up on enough sweet treats to last a year, it was time to leave and head straight over to the hotel le Château de Mazan to check in for the night.

Each room was slightly different and had their own charm, whilst downstairs felt like a Wes Anderson movie set. 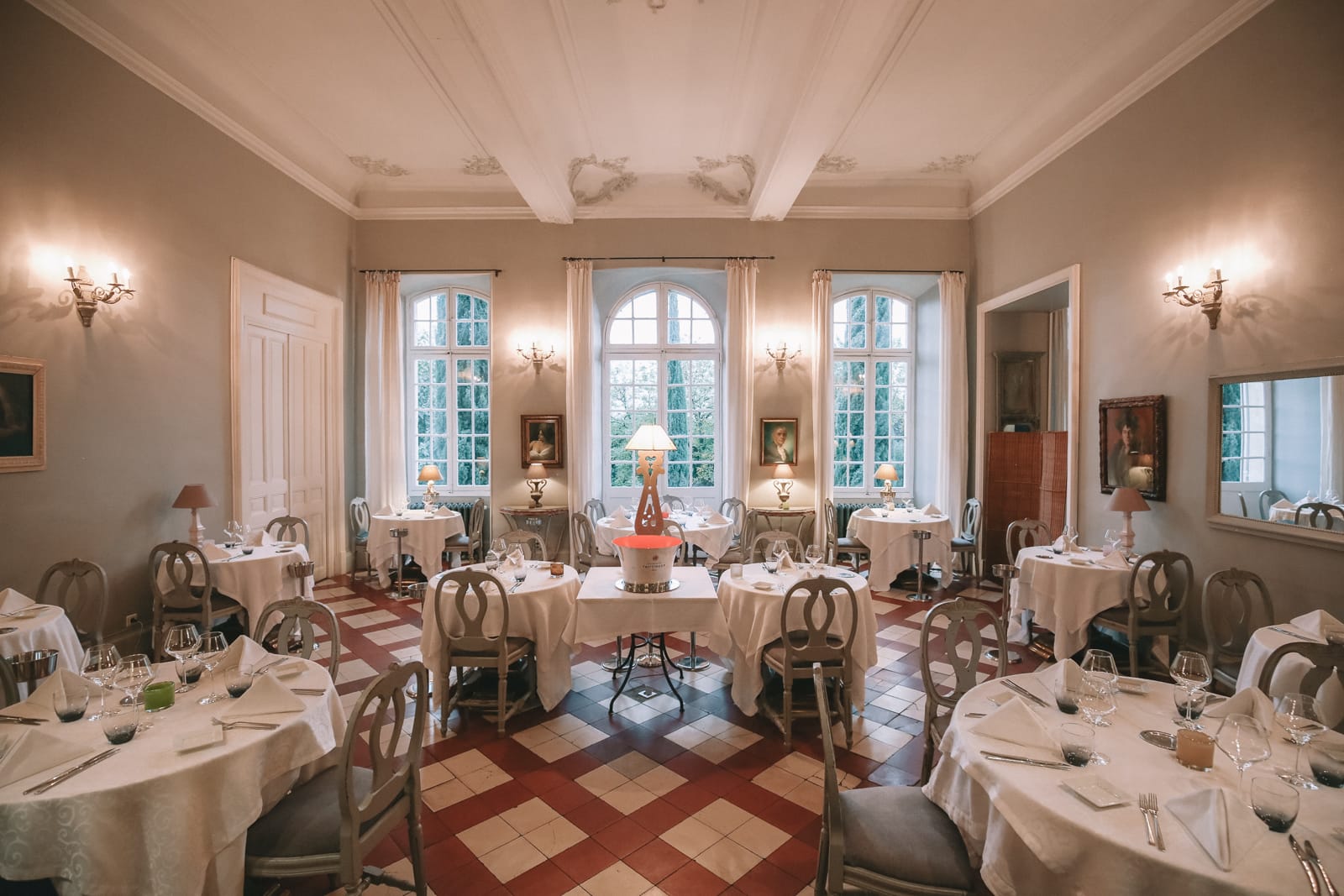 After a long day exploring, we made the decision to stay in the hotel for food, which was a good surprise actually. It was a whopping 4-course affair that made me almost roll myself to bed.

Apart from the amuse bouche, I decided to stick with fish for the evening. Going for salmon and sea bass that was grilled to perfection.

And with that, it was already 11 pm and time to catch some sleep. The days were going so fast in Provence and I couldn’t quite believe that tomorrow would be our last day in the region. It was also the day that was gonna have one of my favourite places in all of Provence. 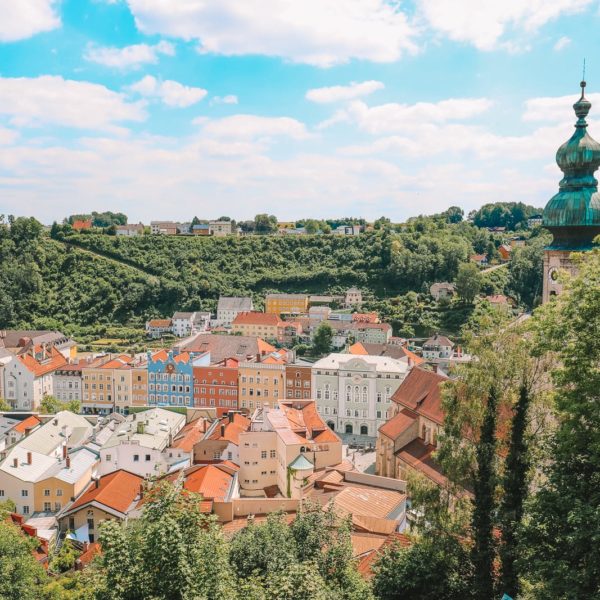 Burghausen Castle – The Longest Castle In The Entire World! 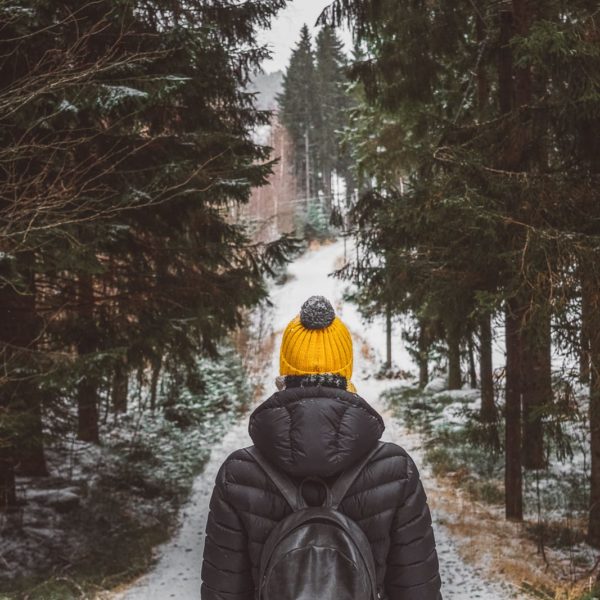 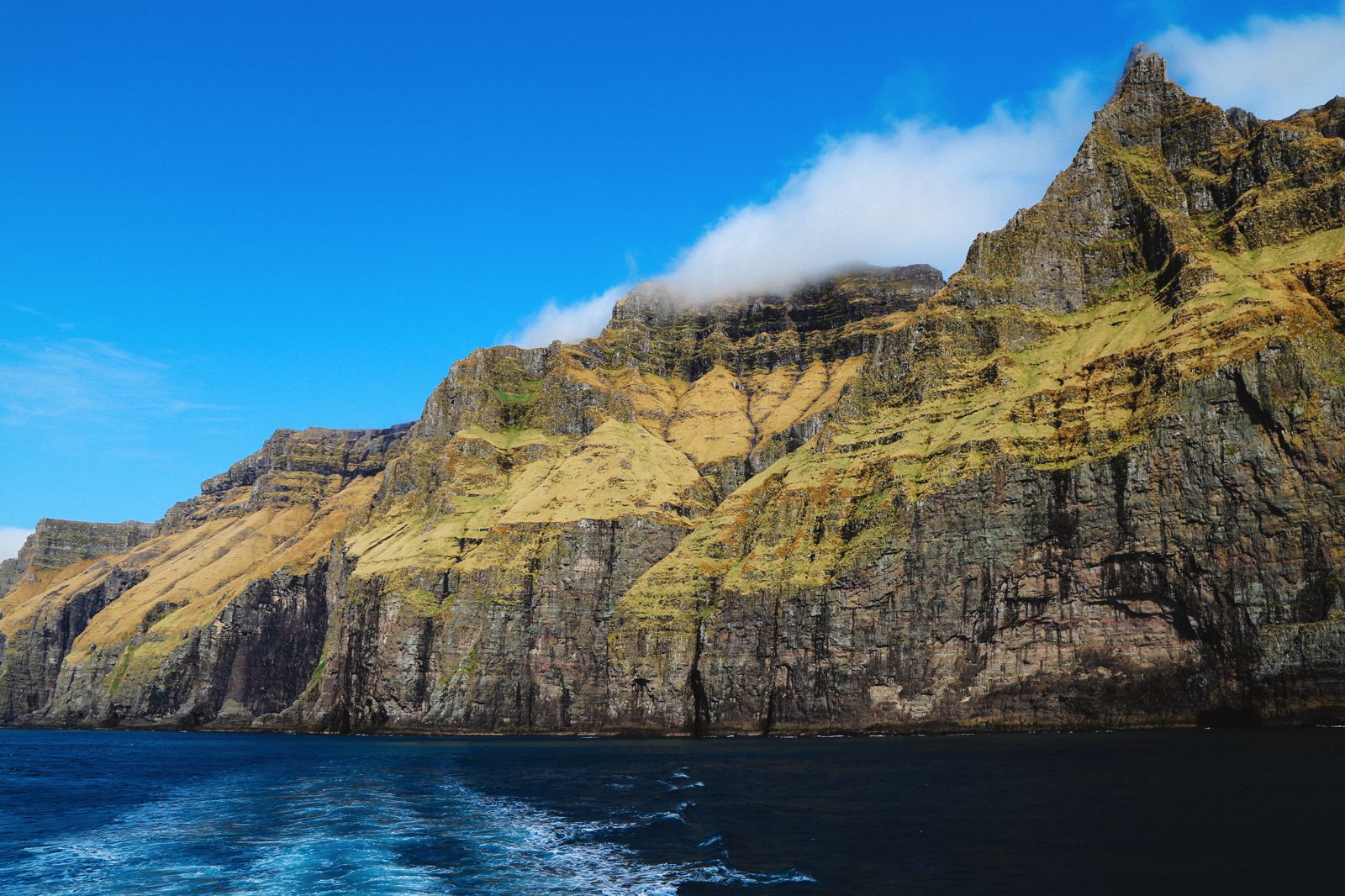 Around The Faroe Islands In 80 Minutes!