16 Best Things To Do In Newcastle, England 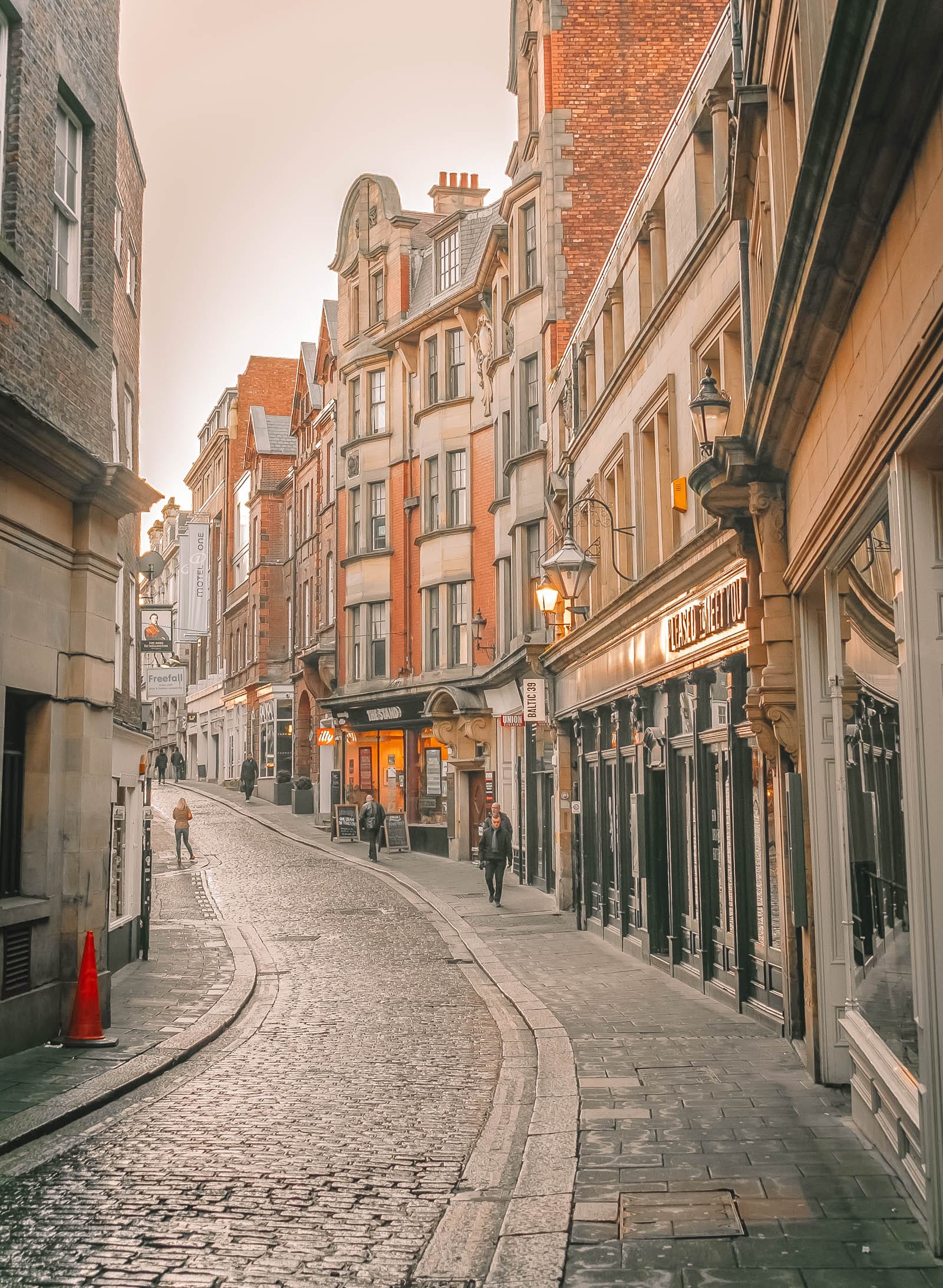 Perched in the north of England, Newcastle is a city that’s well worth a visit, especially for all the history and experiences you can have here. After four visits, I’ve realised that it can actually be hard to whittle down a manageable list of the best things to do in Newcastle, especially if it’s your first trip.

This is exactly why I wanted to share some of the best things to do in Newcastle for a long weekend trip. Better still, Newcastle is a really easy city to visit if you’re on a road trip in the north of England. You see, It’s the perfect (relatively small) city that’s got a heap of historic landmarks and nature that are just a stone’s throw from the city itself.

For instance, gorgeous regions like Northumberland and Holy Island are really easy to visit on a day trip from the city and can easily be partnered into a mini-road trip of the east coast itself. 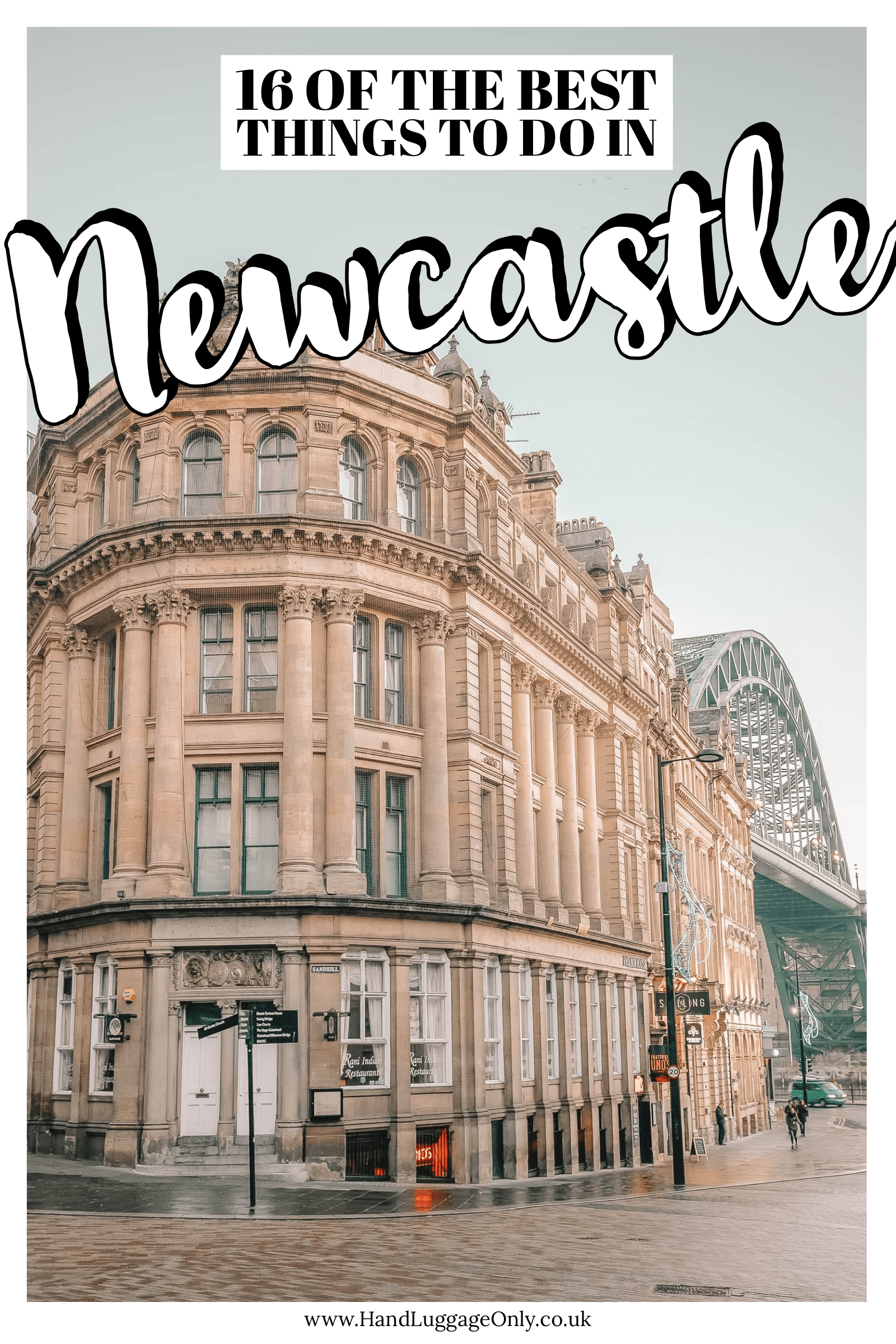 Take a look, below, at the best things to do in Newcastle on your trip. Have the best time. 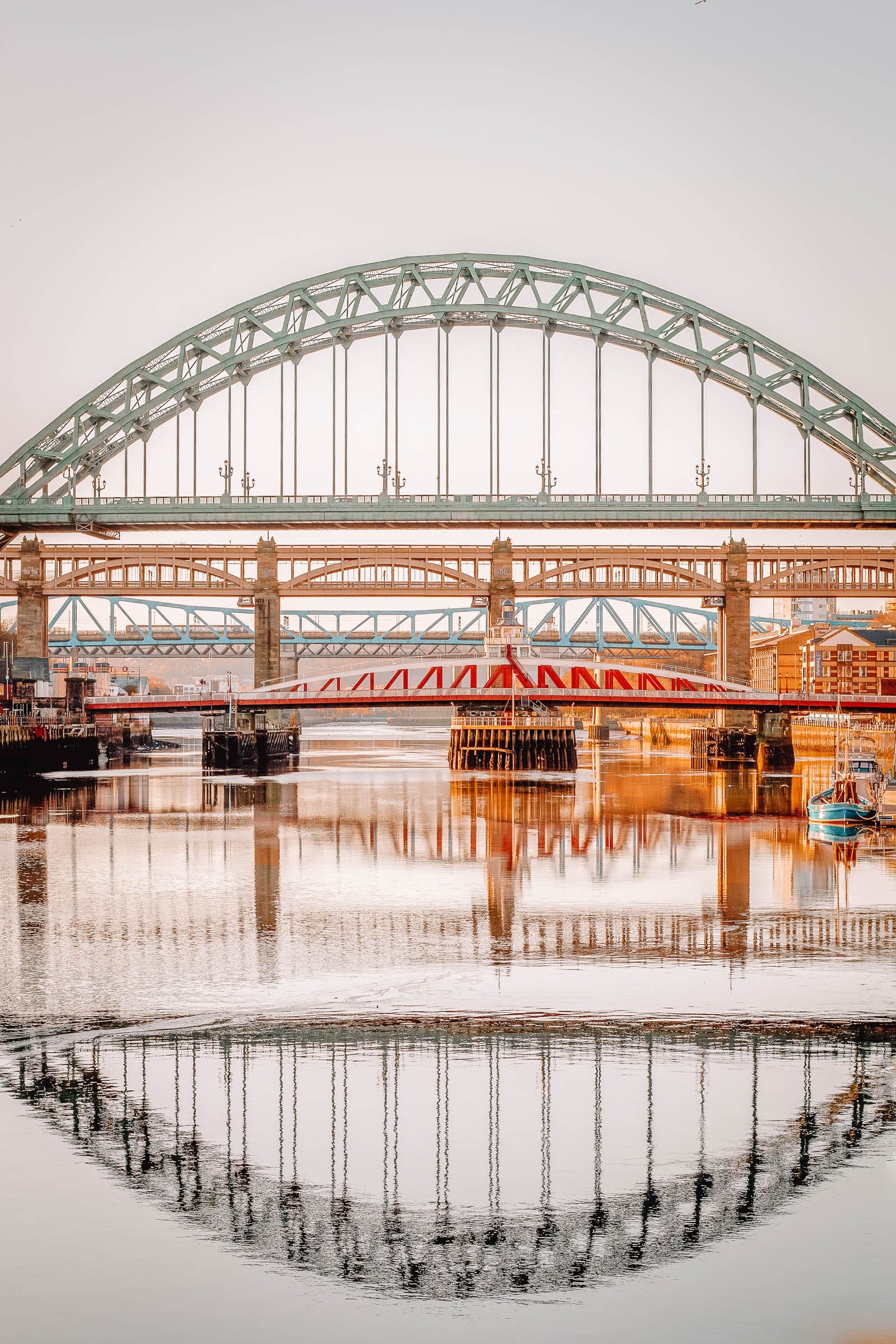 Almost 100 years old, the Tyne Bridge is probably the most iconic landmark in Newcastle. Truth be told, it’s actually quite hard to miss the Tyne Bridge as it dominates the city skyline around the river Tyne itself. 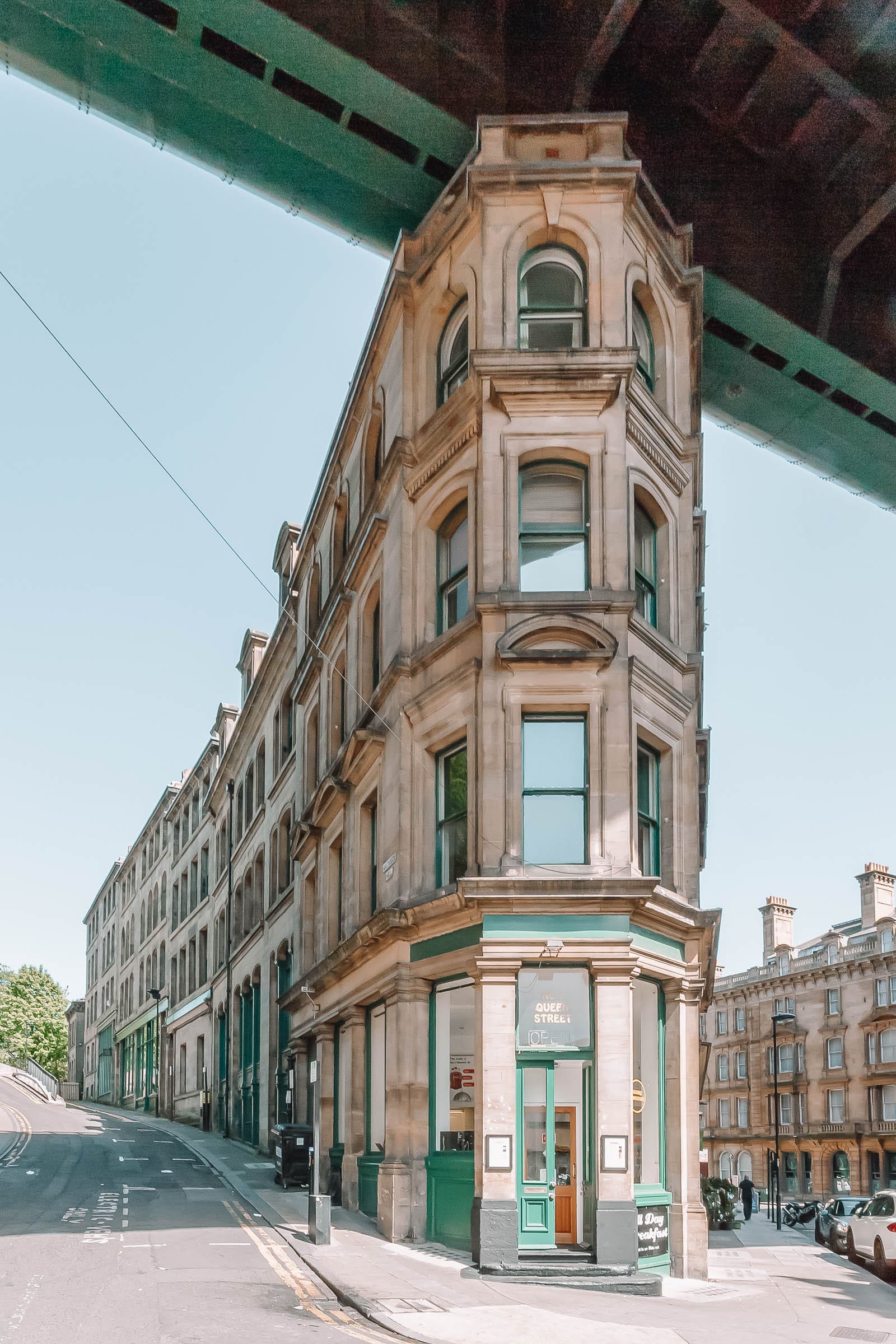 Also, whilst you’re here, take a look up at the structure itself, you’ll likely spot the kittiwakes (like seagulls). Apparently, it’s said that there are around 700 couples that call the bridge home. 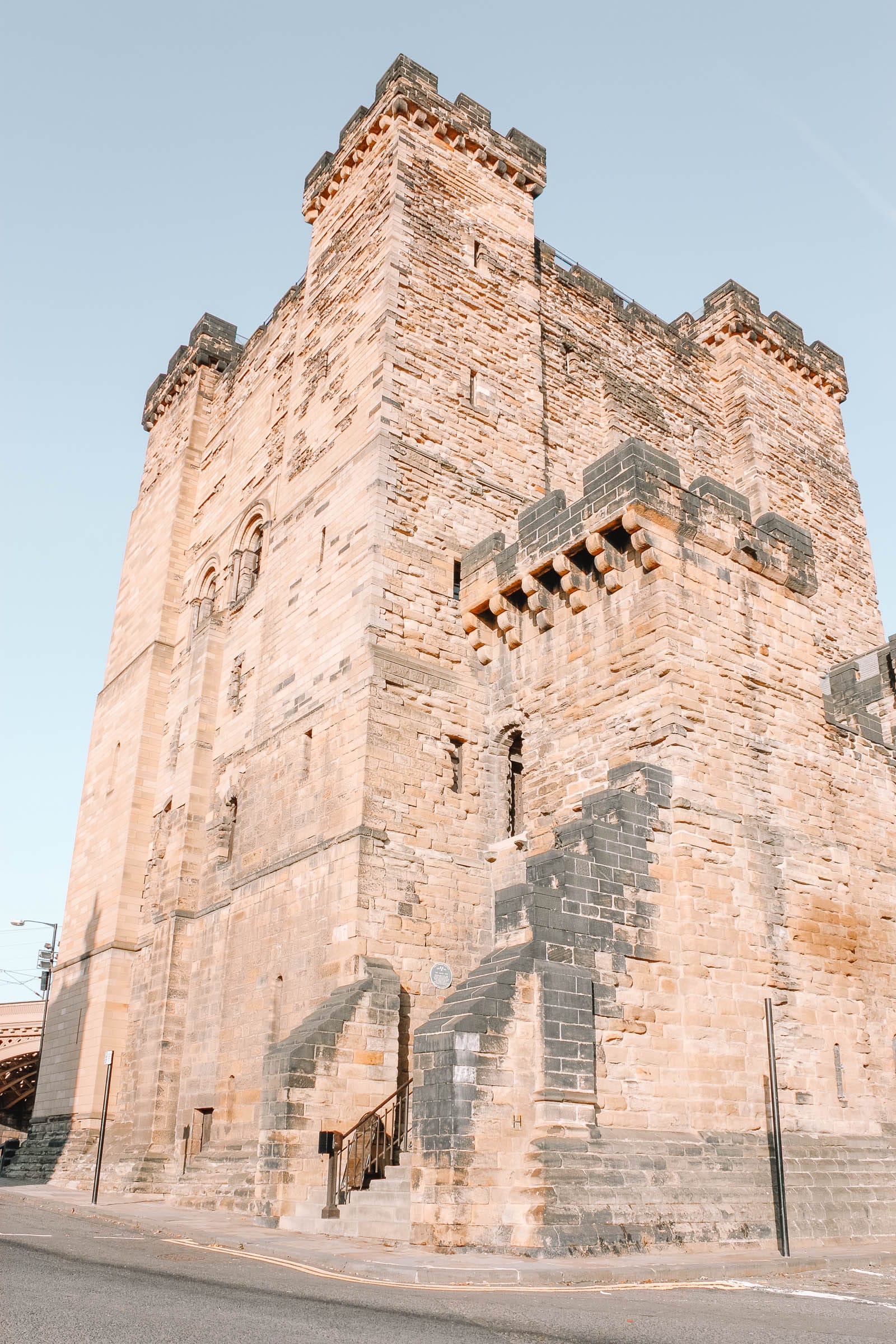 Built around 900 years ago, seeing the castle is one of the best things to do in Newcastle if you love a bit of history. Open most days, you can pop inside and explore how Newcastle actually began and the long history of this region.

Whilst you’re here, you’ll even learn about how Newcastle was founded upon the Roman city of Pons Aelius that fell into ruins. 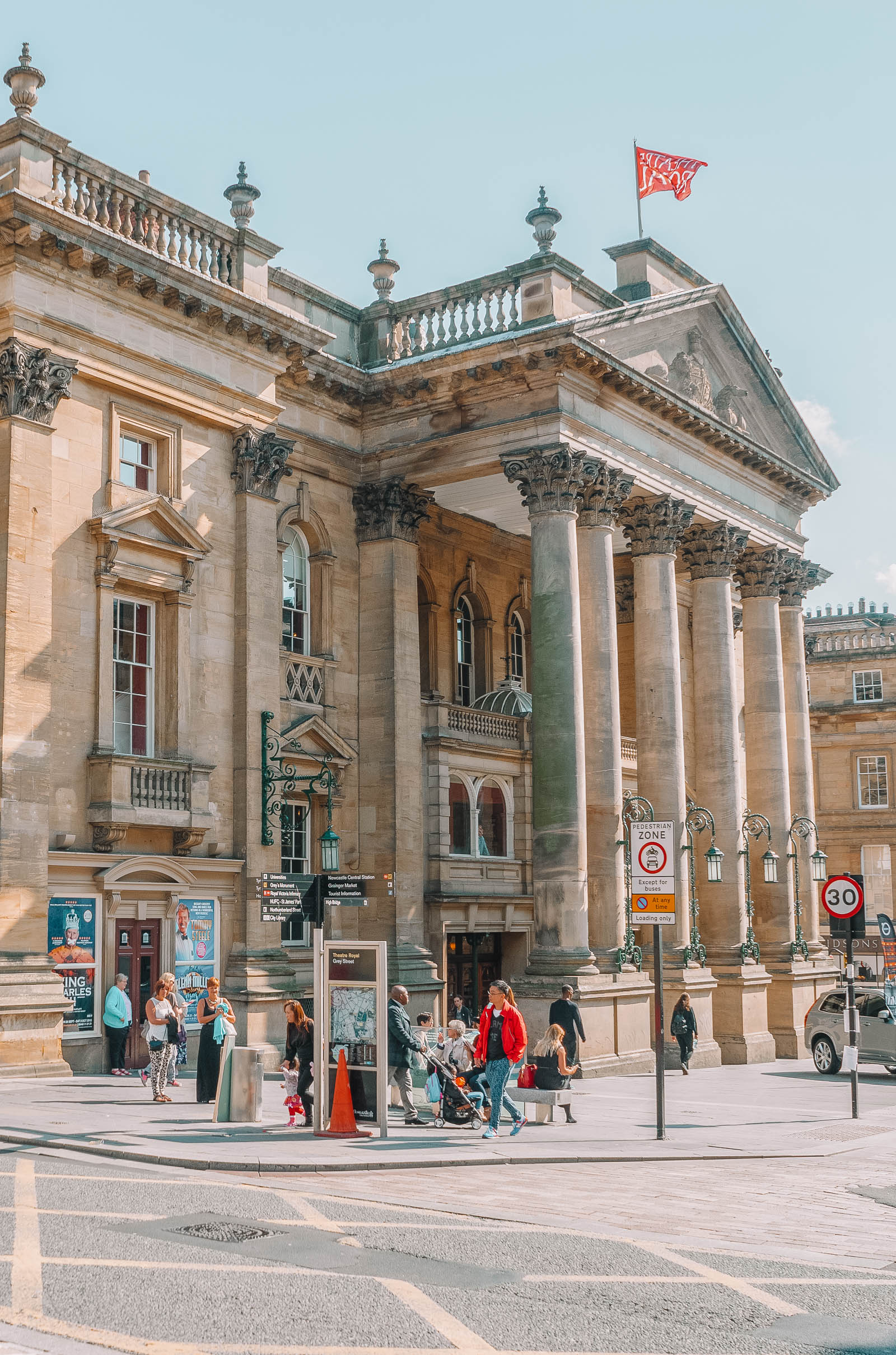 If it shows you’re after, then visiting the Theatre Royal is one of the best things to do in Newcastle for sure. You see, it’s one of the historic venues that houses a range of shows throughout the year, with something always on to watch. 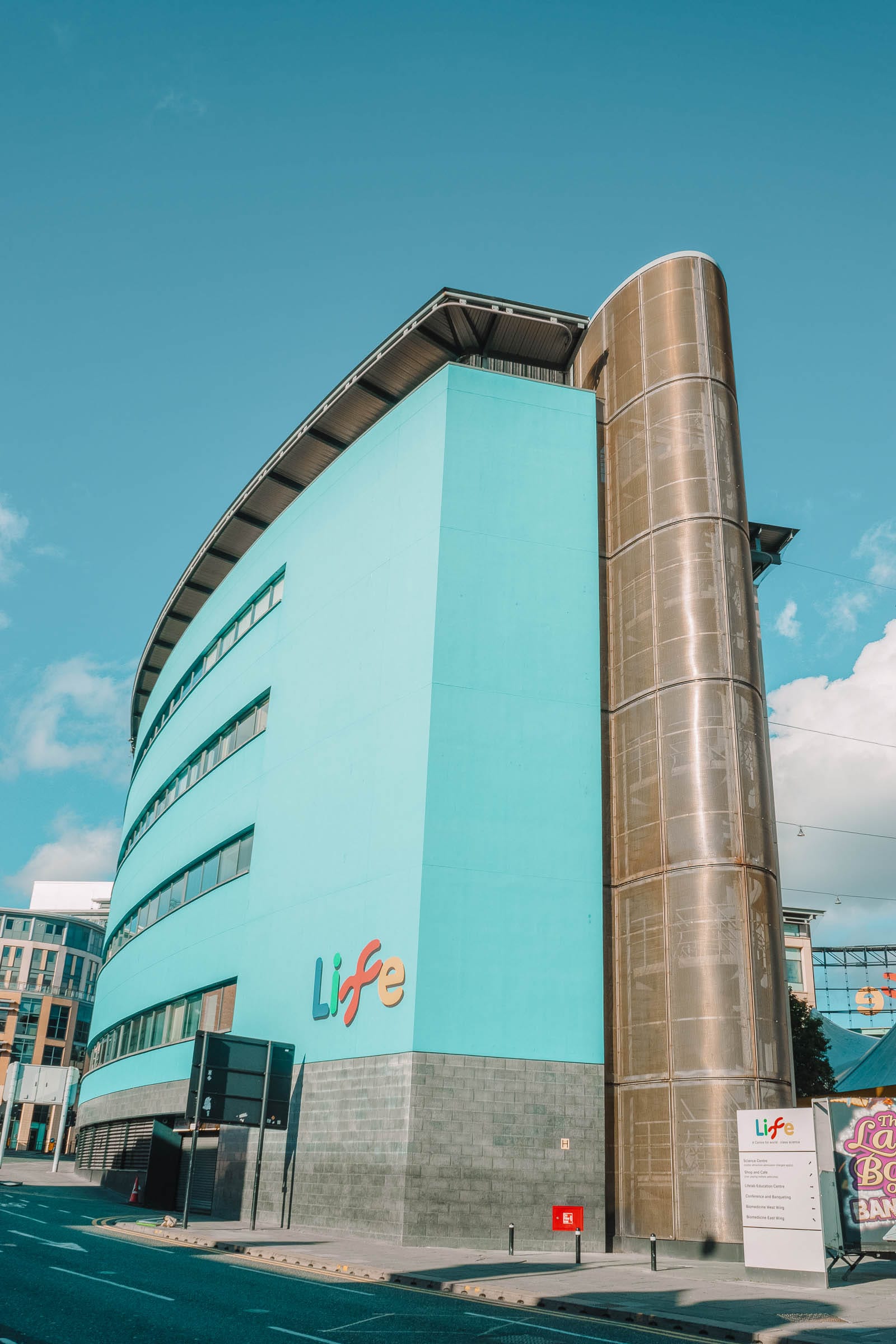 If you’re fancying a little museum-come-science experience, then you should definitely pop into Life. Perched relatively close to the train station, the Life Centre is an indoor spot that’s great for all the family.

It’s the kind of place where you can learn all about ‘life’ and how we live. 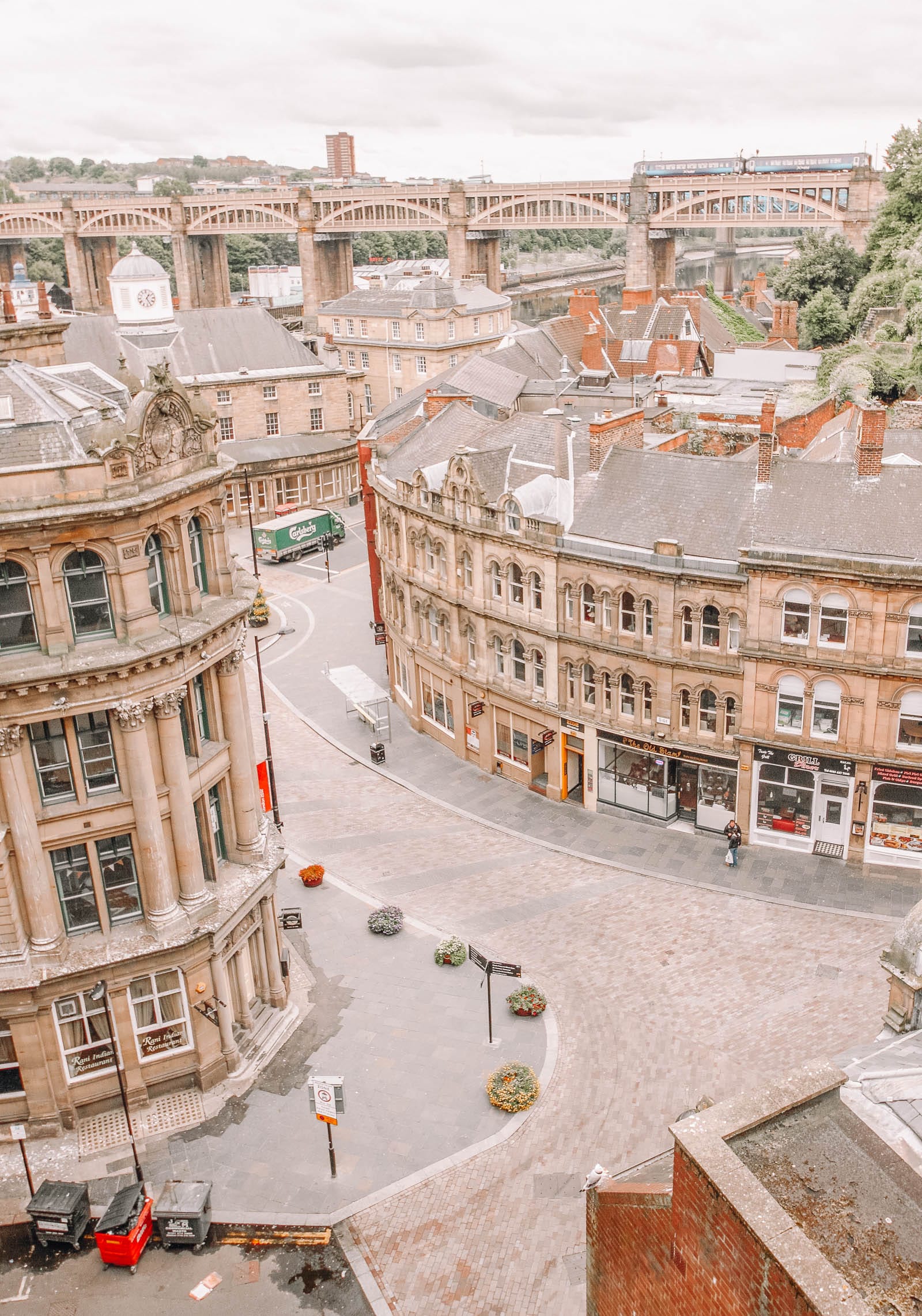 So, the Quayside is probably one of the best things to do in Newcastle that’s really easy to do when you’re heading out for food or a stroll. You see, the Quayside area is filled with little restaurants and places like the BALTIC Centre for Contemporary Art.

After seeing the bridges and places like the Sage, stop off for a bite to eat at places like The Broad Chare for some traditional pub grub. Their Scotch eggs are so yummy. 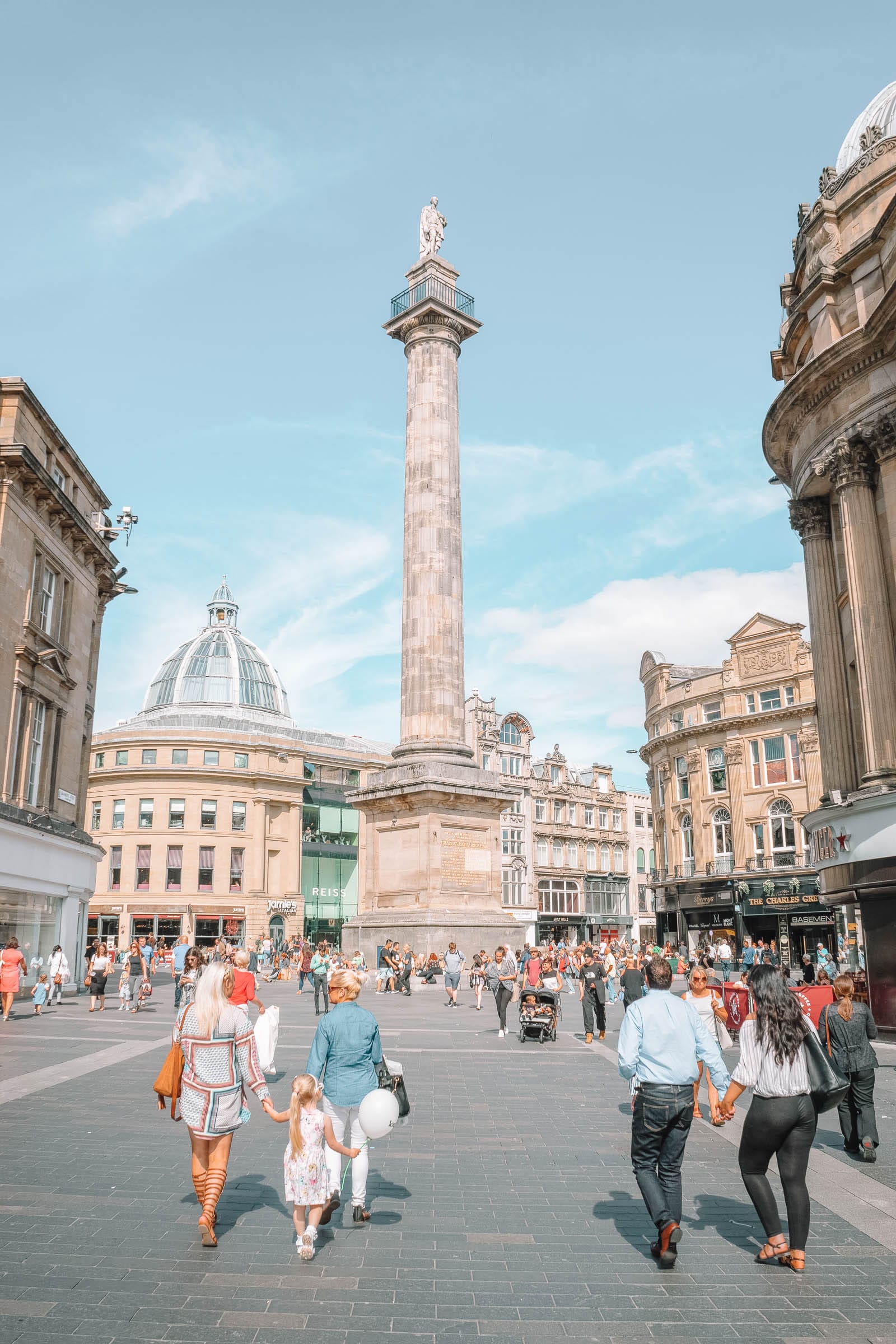 Although Grainger Town sounds like a totally different place to Newcastle, it’s actually right at the very heart of the city. 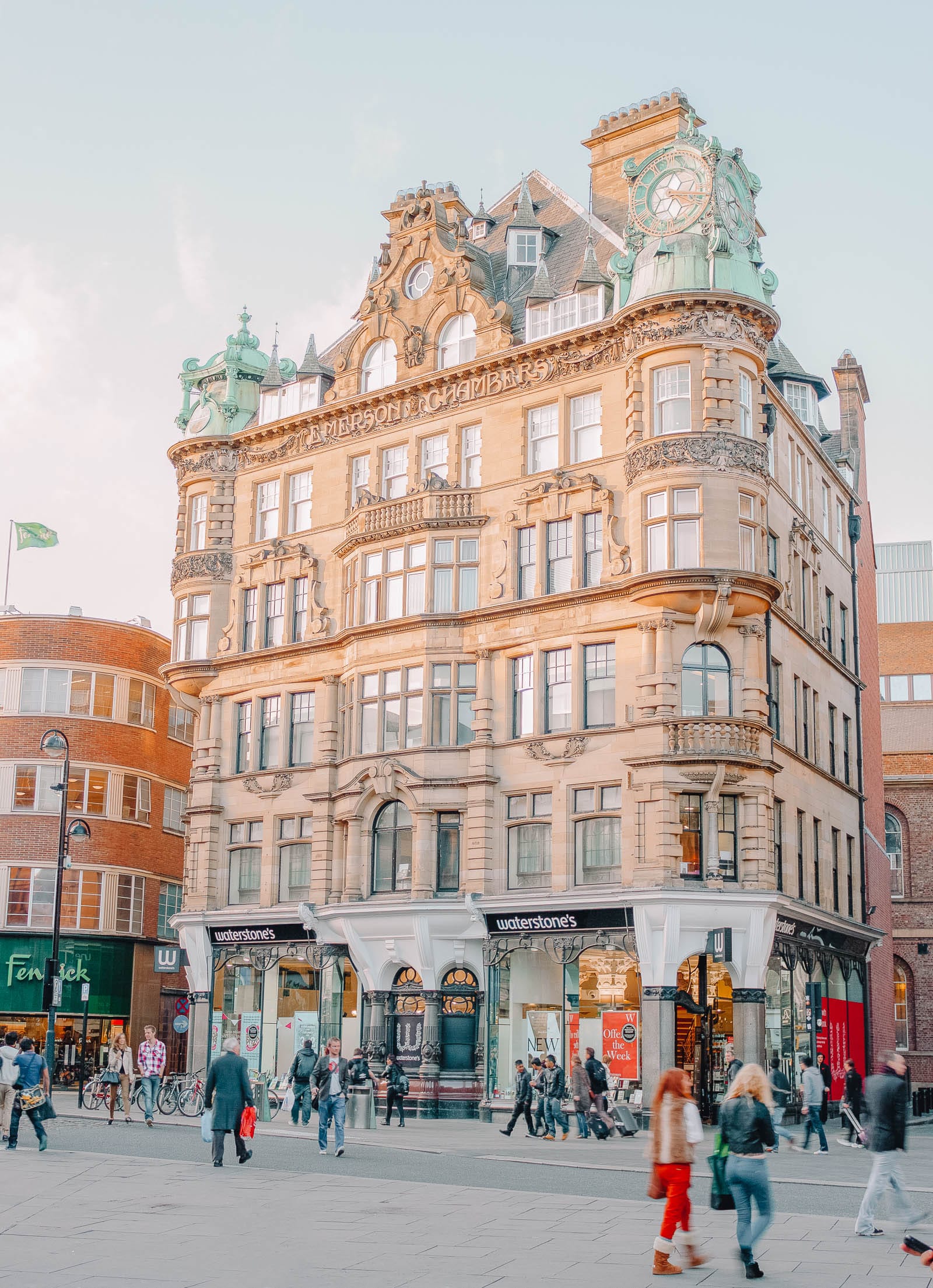 Now, in my opinion, some of the prettiest buildings in Newcastle are based within Grainger Town. Built way back in the 1800s by Richard Grainger, the area still holds so much of its character and stunning buildings that call this place home.

Take a wander through High Bridge Street and Grey Street, grab a proper English cuppa or pop over to the Edwardian Central Arcade that is just beautiful to see. 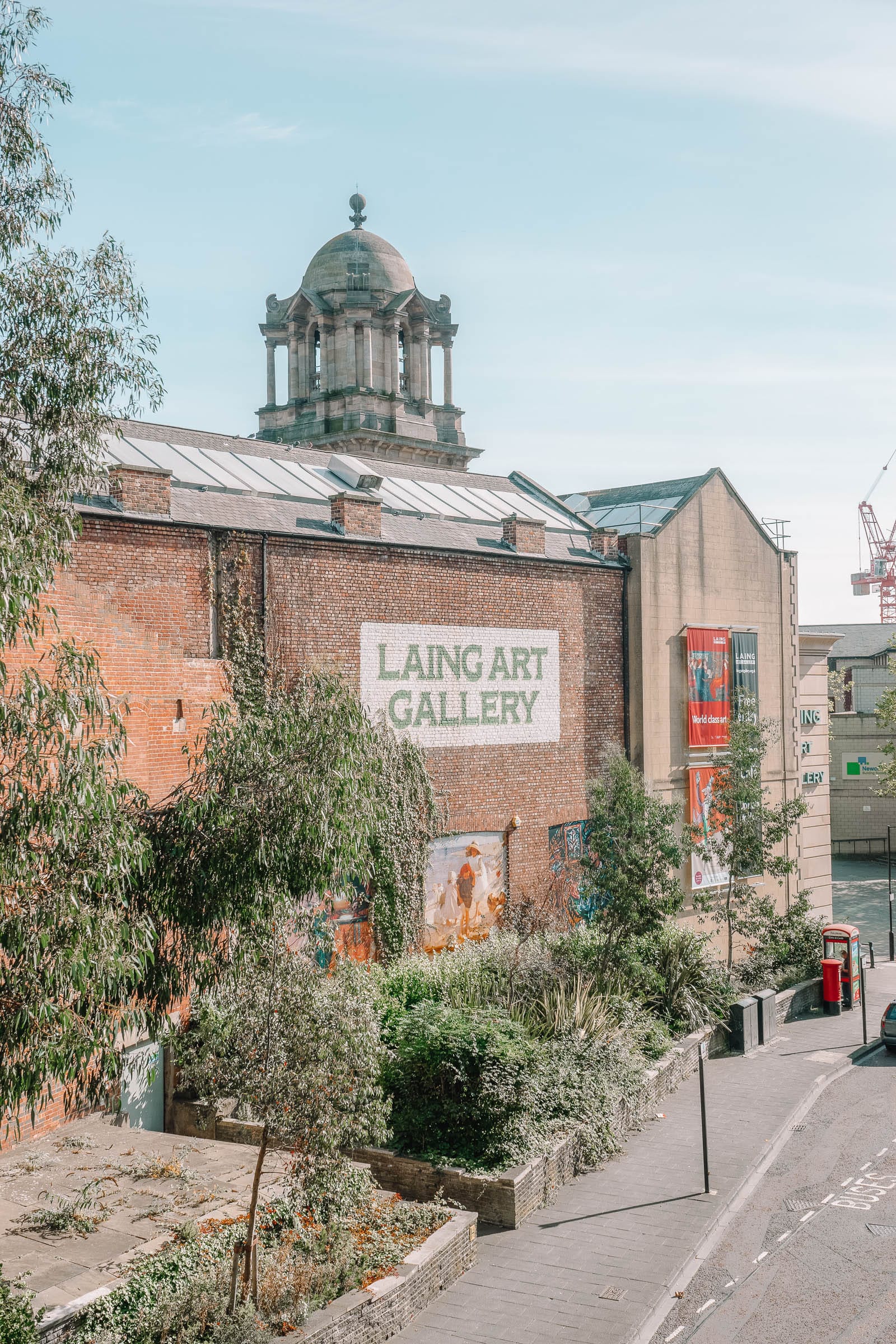 Perched on New Bridge Street, visiting the Laing Art Gallery is one of the best things to Newcastle if you’re something of an art lover. Open from 10:00 am, it’s a great spot to explore some contemporary art and some iconic classics, too. 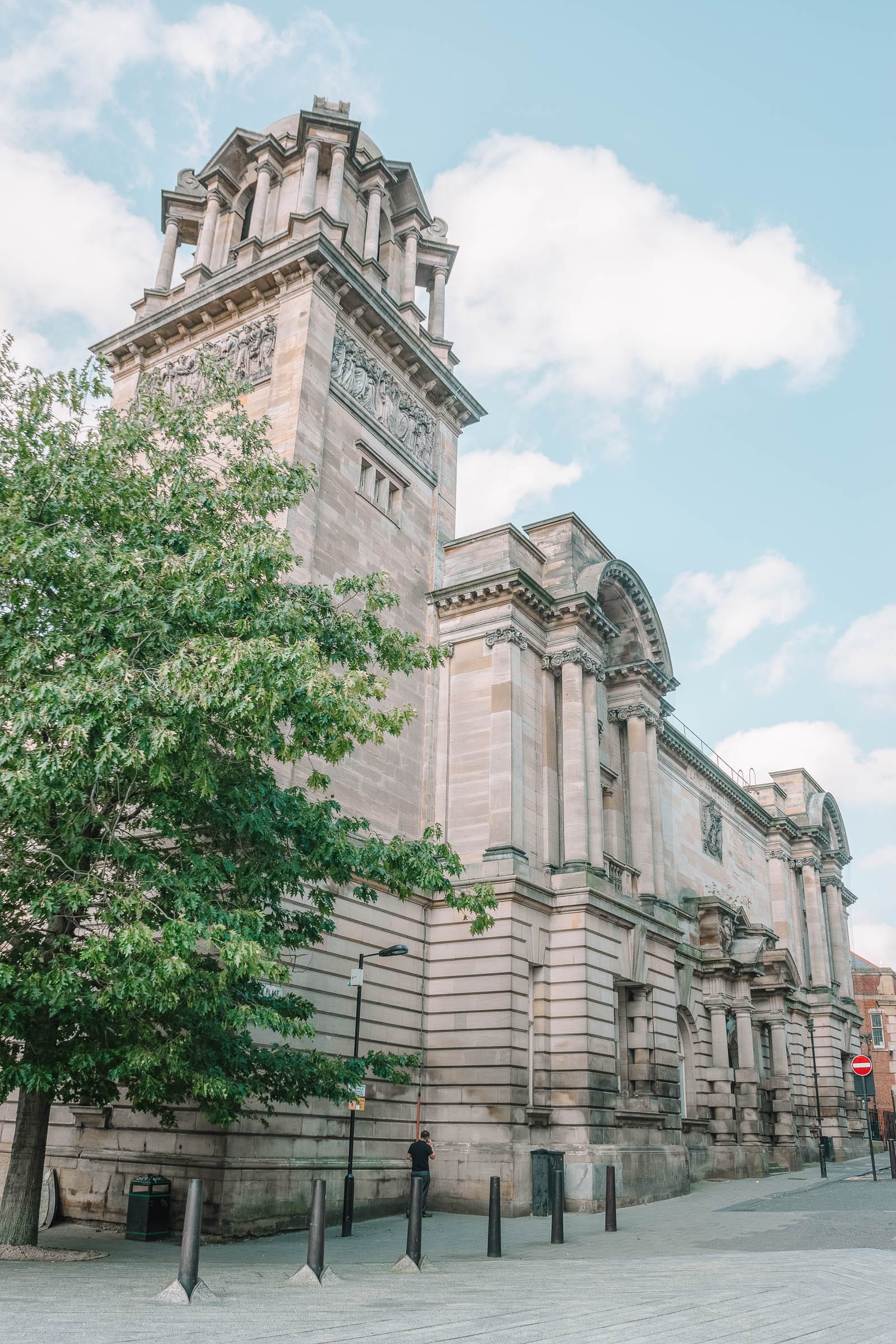 Just make sure to spend some time on the lower floor, housing the Northern Spirit gallery. Here, you’ll find a treasure-trove of local art and treasures that you can’t miss. 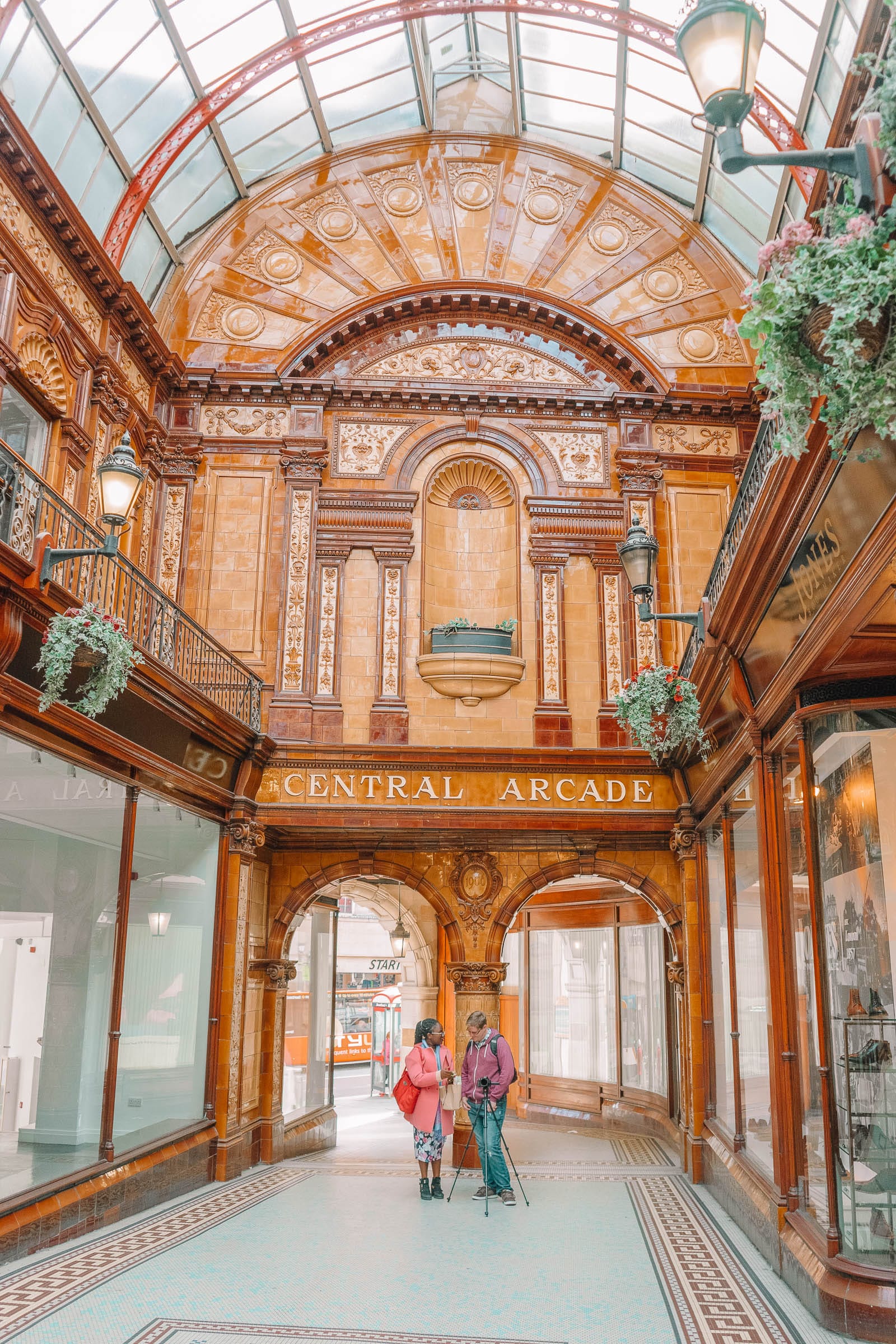 So, I briefly mentioned the Central Arcade earlier (as it’s in Grainger Town) but I had to give it a dedicated mention in its own right.

You see, the Edwardian Central Arcade is totally stunning and very different from a ‘mall’ that you might expect to see in more modern cities. Truth be told, that’s one of the things I love most about Newcastle, the history and buildings that seen to stretch centuries.

Read more: Best places in the south of England to explore 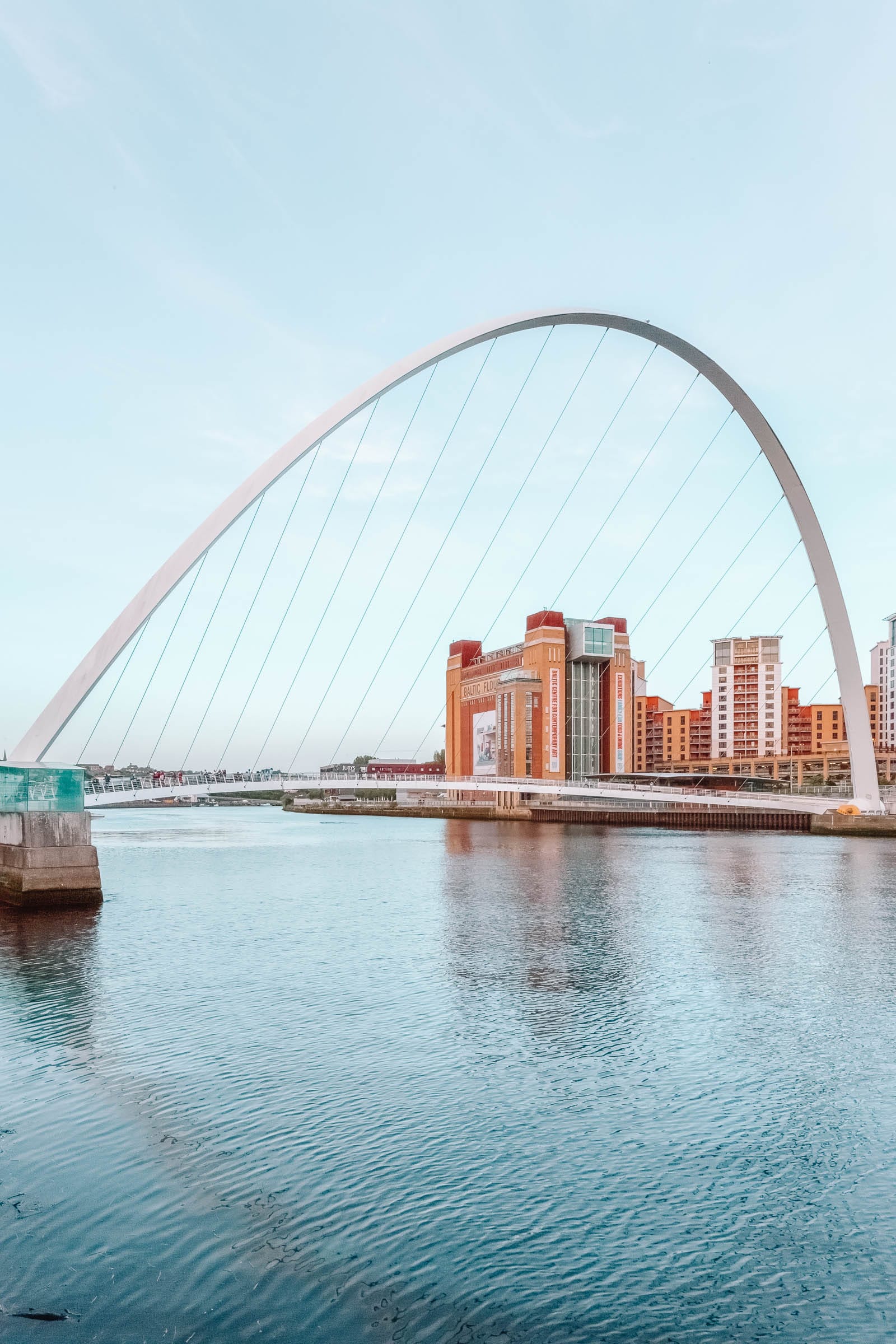 One of the newer bridges in Newcastle is the Millennium Bridge that spans the River Tyne. Now, just like the Tyne Bridge, it’s pretty hard to miss (so don’t worry too much about searching for it).

Take a wander around the Tyne, walk over the bridge and head to the Sage for a little look around, too.

Also, for a great place to stay nearby, check into the Hotel Indigo that’s right in the centre of Newcastle.

10.) Church Of St Thomas The Martyr 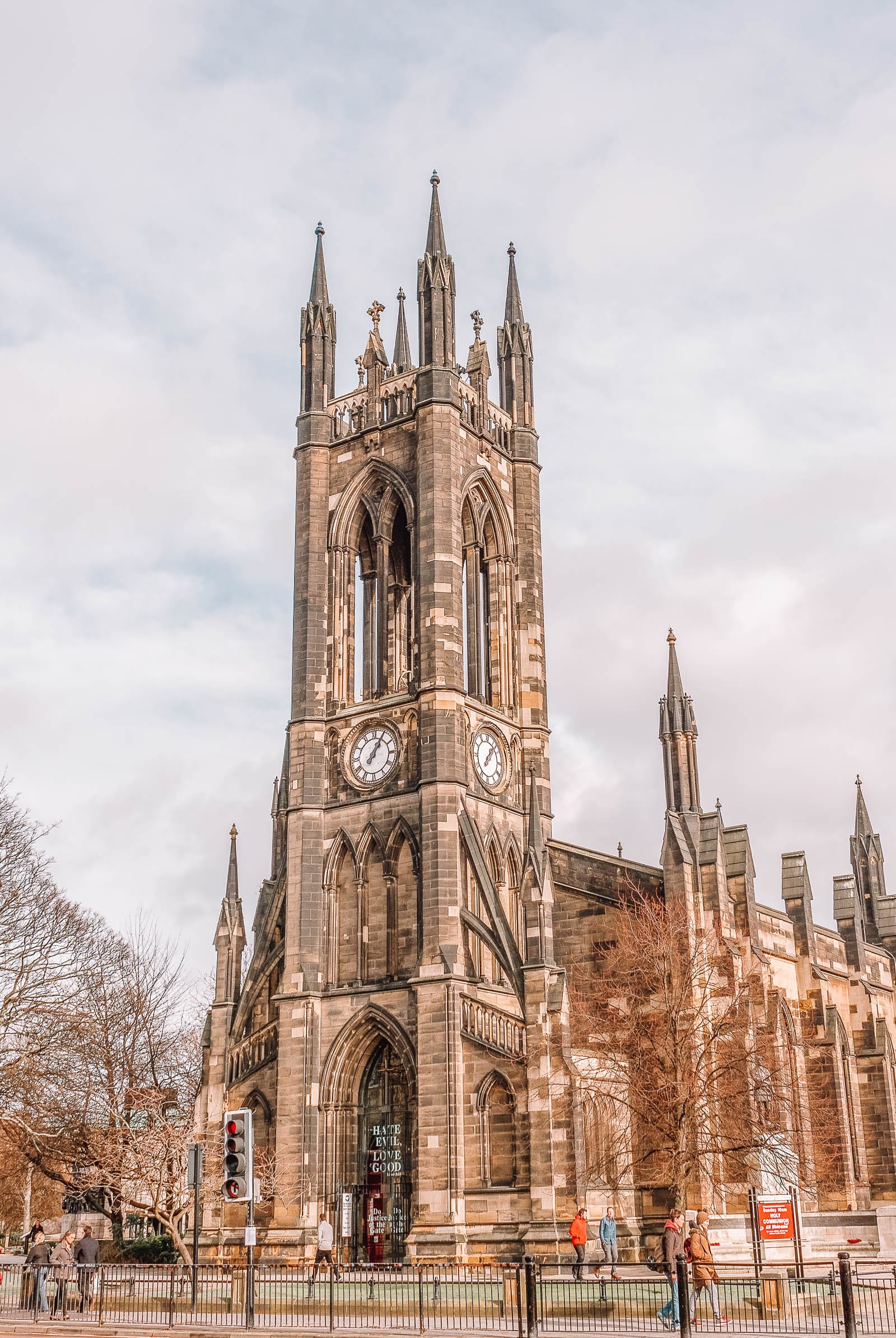 Possibly one of the most iconic churches in Newcastle, the Church of St Thomas the Martyr is pretty easy to visit, especially if you’re near the Haymarket area.

Take a wander inside the church, see the stunning architecture and stop to see the organs, too. It really is beautiful to see. 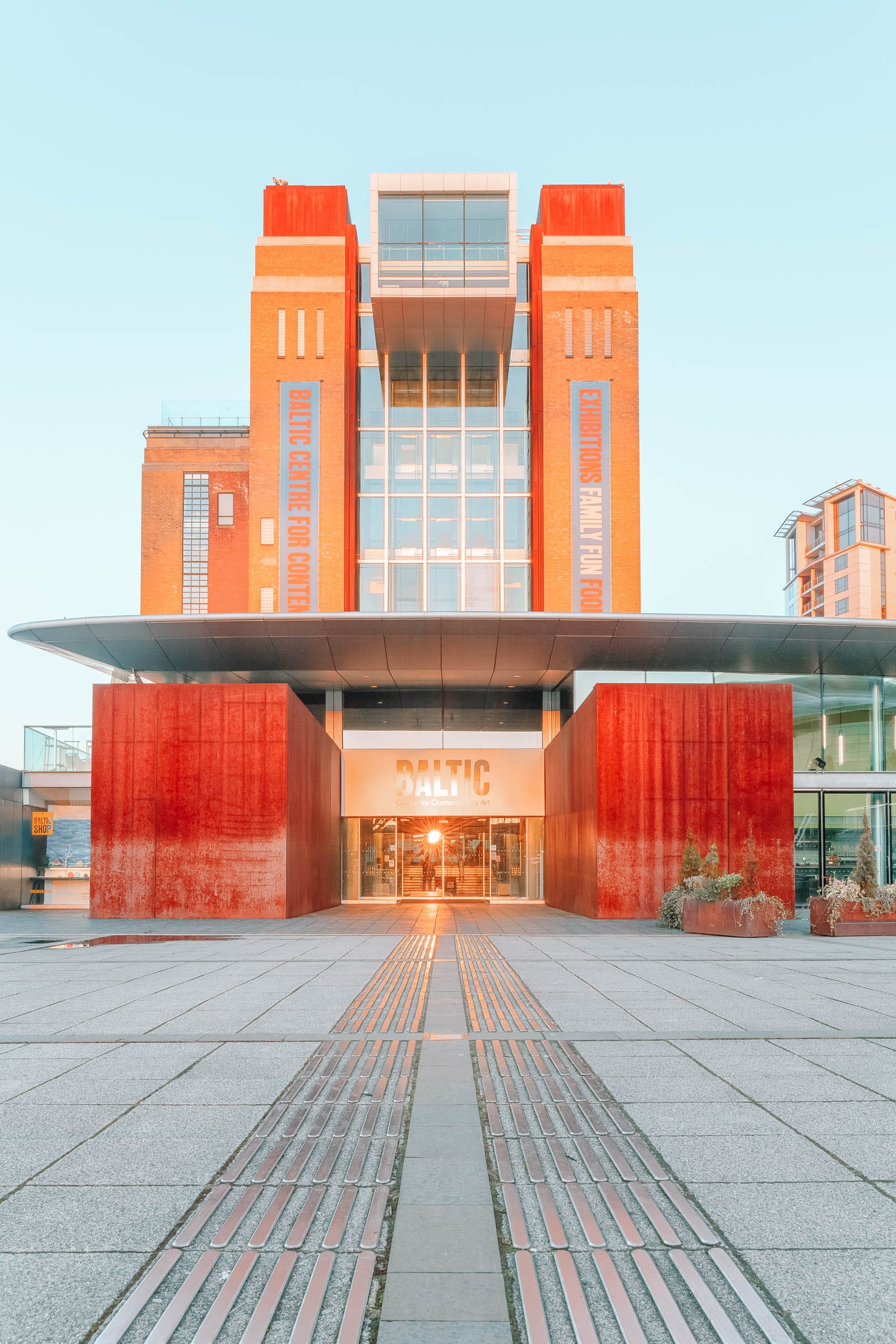 Although technically based in Gateshead, the Baltic Centre for Contemporary Art is situated just across from the Millennium Bridge.

Once here, make sure to see their temporary exhibitions that change every few months. And, just like the Laing Gallery, it’s one of the best things to do in Newcastle if you love art. 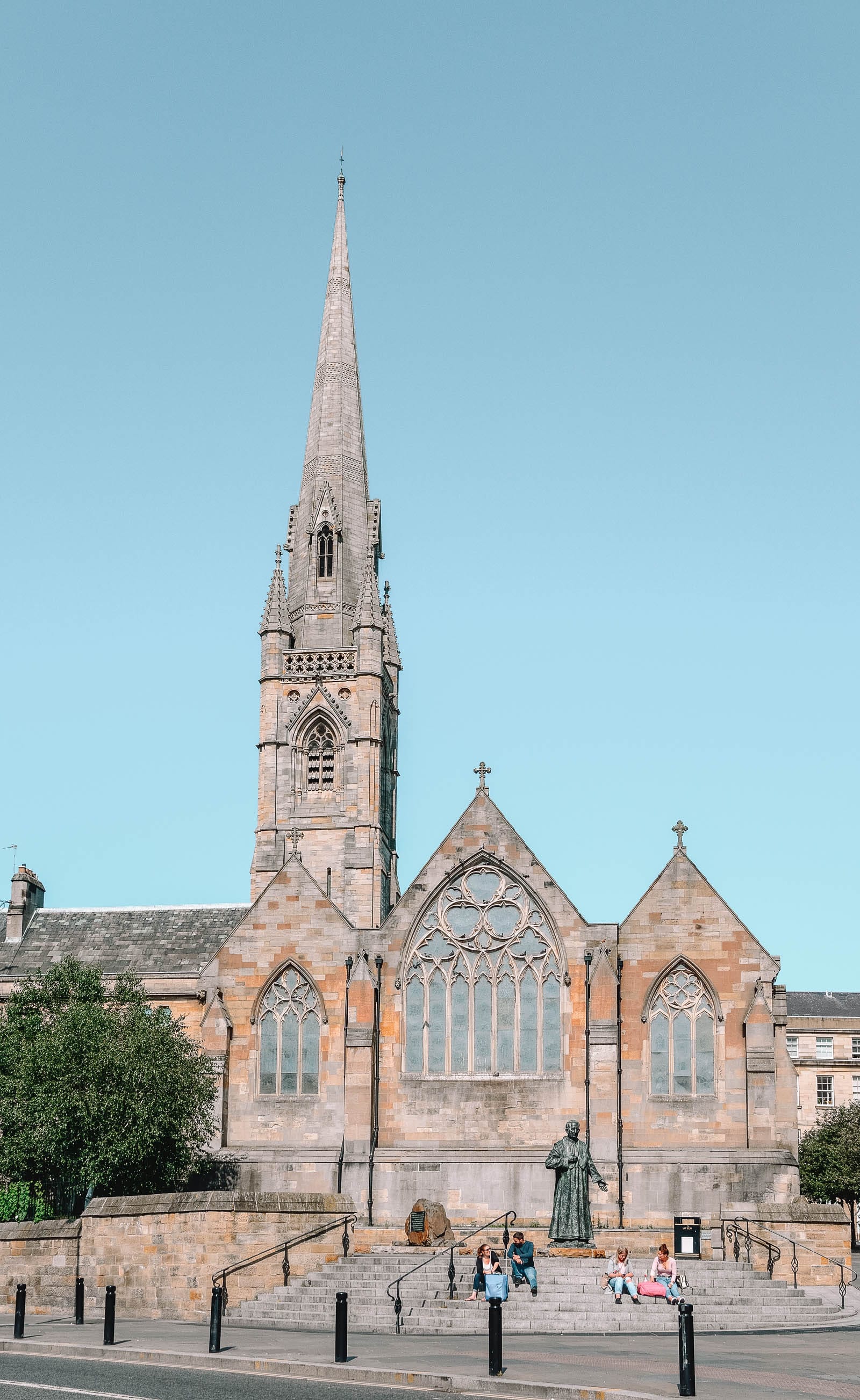 Situated on Clayton Street, St Marys Cathedral was built in the 1800s. Situated not too far from the Life Science Centre, it’s really easy to visit if you’re in central Newcastle or only have a few hours stop in the city.

Afterwards, stop off at Aidan’s Kitchen for a tasty brunch of waffles or a full English breakfast. 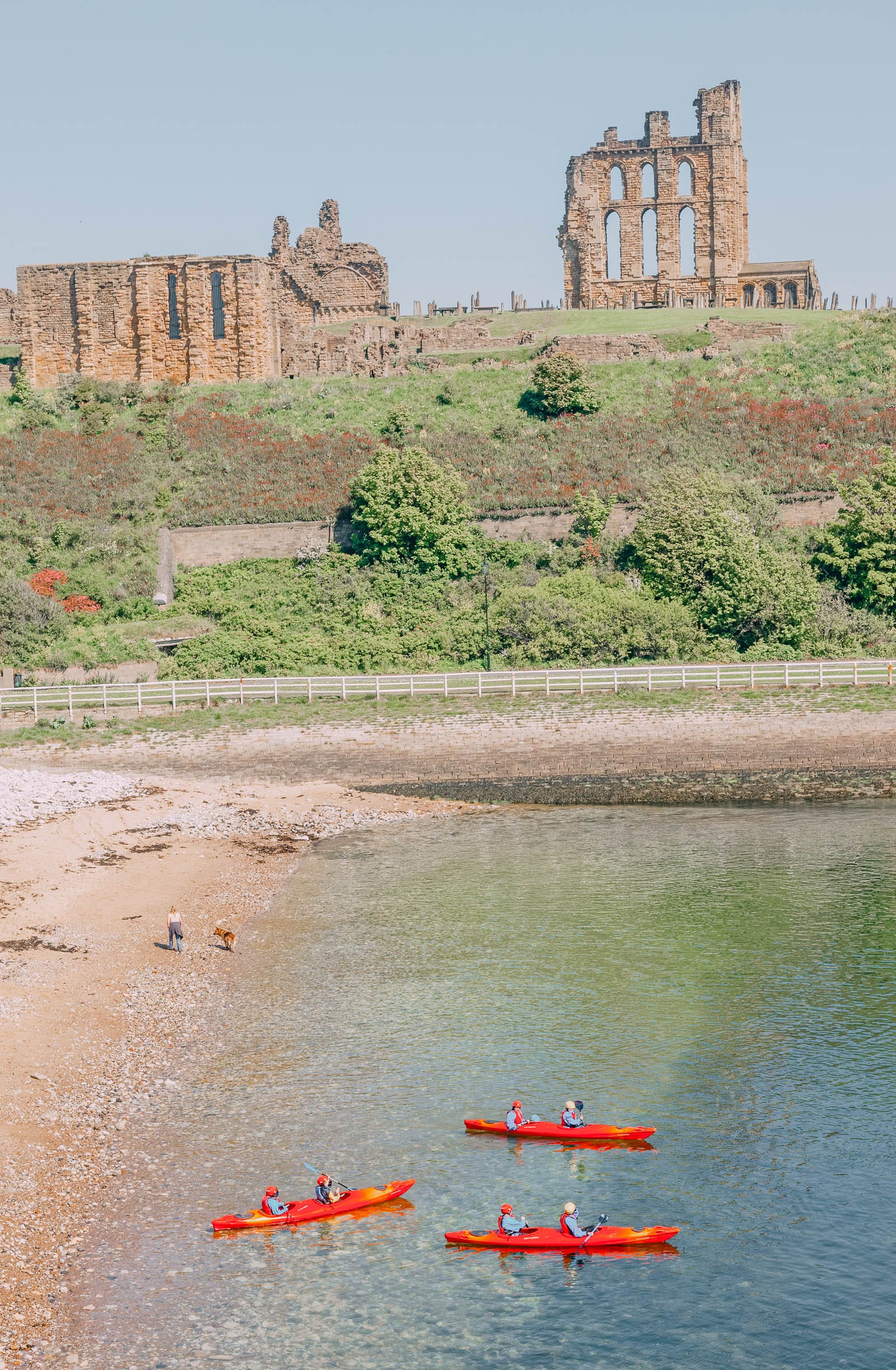 Nestled on the east coast, overlooking the North Sea, Tynemouth Priory is situated around 5-miles from the centre of Newcastle.

Once one of the most fortified areas in England, Tynemouth Priory has centuries of history. In fact, there’ even evidence of settlements here with the Anglo-Saxon monastery. Once in the area, make sure to see the 15th-century chapel, wander through the grounds and learn more about the history of this area just outside the centre of Newcastle.

14.) Beamish, the Living Museum of the North 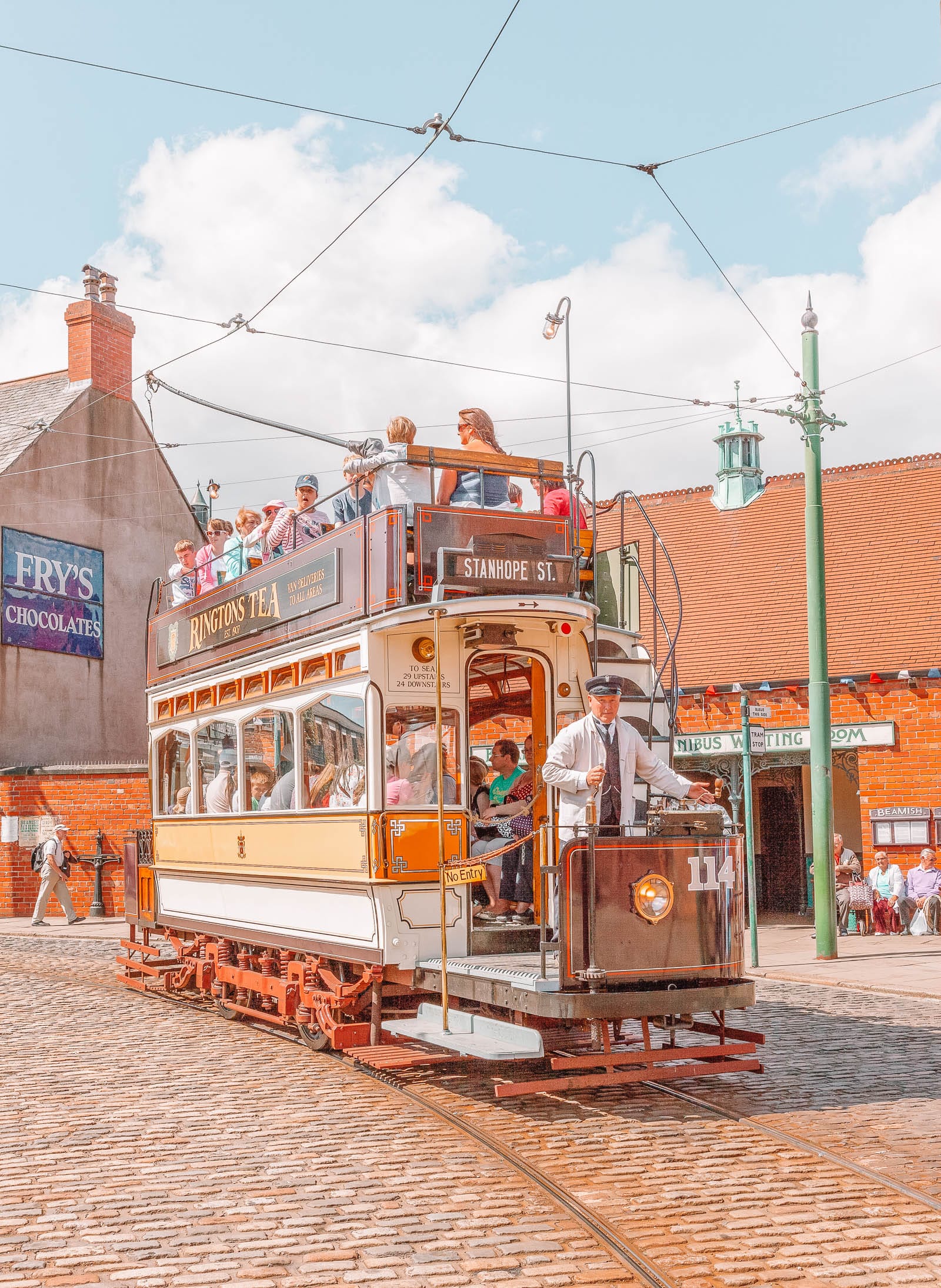 The Living Museum of the North is a massive open-air museum that houses some of the historic parts of northern England’s history.

The whole museum tells the story of what life was like in northern England during the 19th and 20th Century. It’s a great place to go if you want to pop out of the city centre for a day.

Now, if you are heading here, make sure to make a little pit stop at the Angel of the North which is a massive statue that overlooks the region. If you’re driving, you really can’t miss it.

Read more: Best places in the north of England

15.) The Cathedral Church of St Nicholas 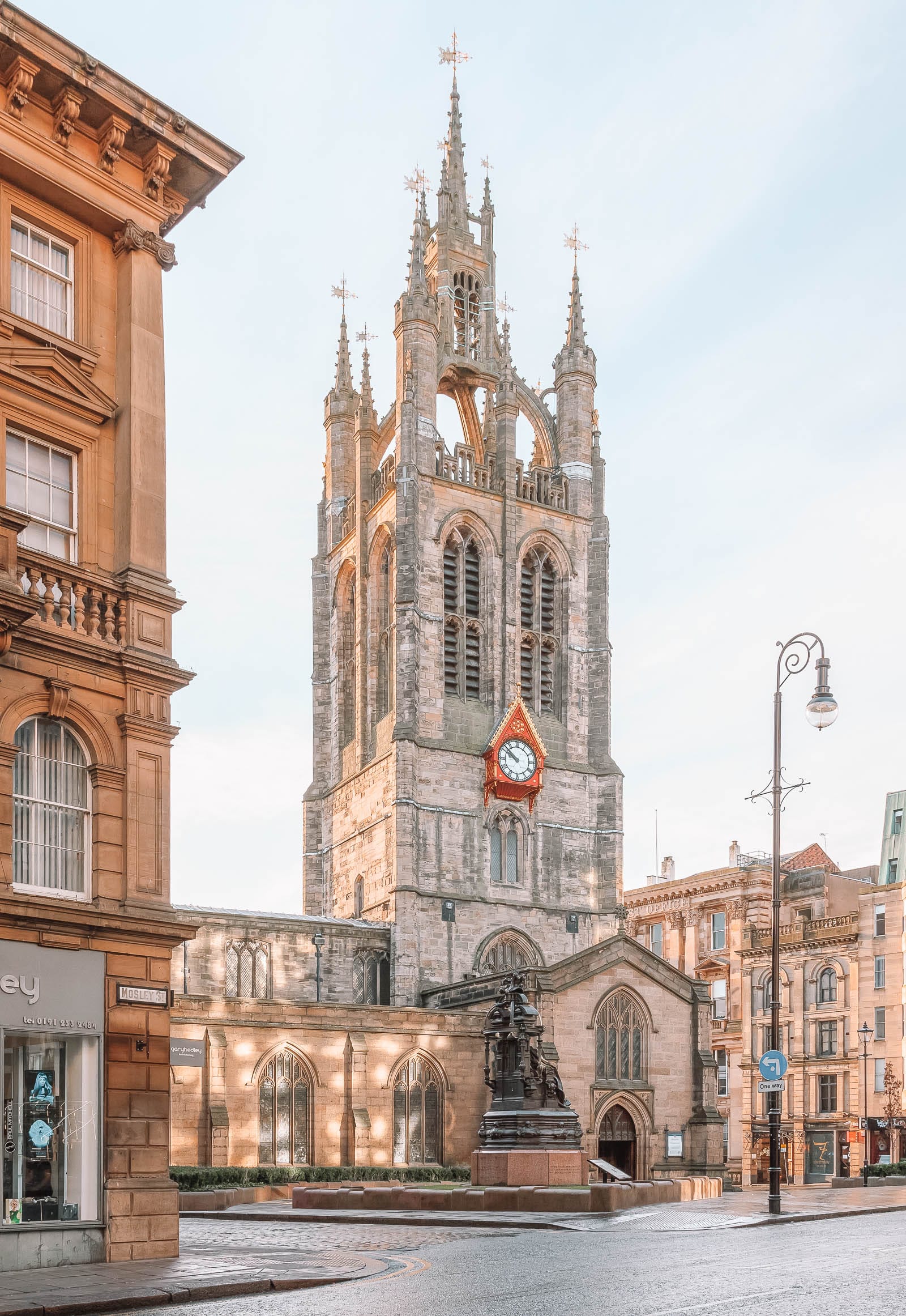 Being the seat of the Bishop of Newcastle, the church of St Nicholas is one of the most important cathedrals in the region. Founded almost 1,000 years ago, the site has had a long history and one of the best things to do in Newcastle if you’re a lover of history.

Once inside, take a wander around the invaluable architecture and treasures. It even said that Hadrian’s Wall (around 1,900 years ago) actually went through the graveyard of the church way back when the Romans built the wall itself. 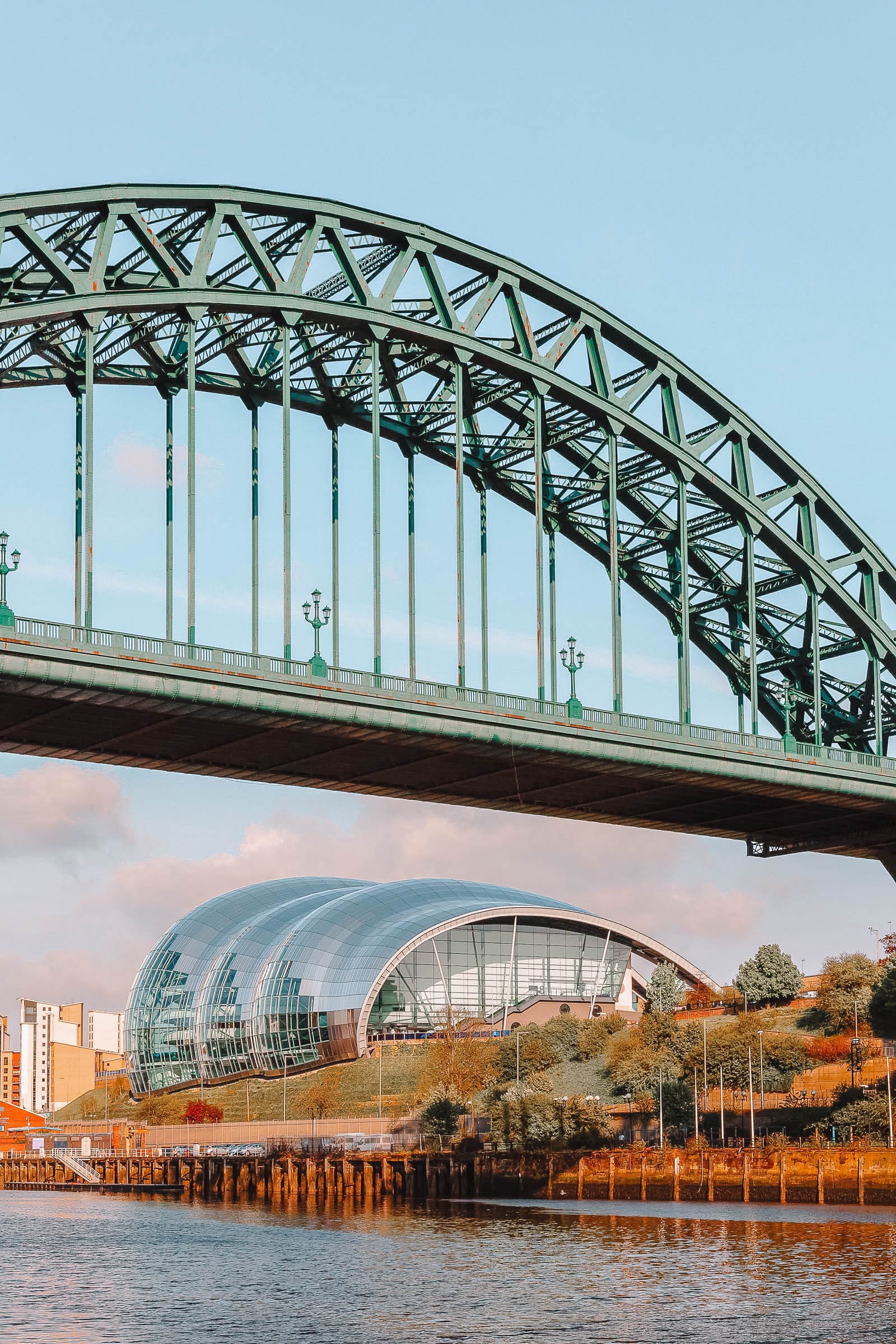 The Sage in Gateshead is probably the most iconic music centre in Newcastle and Gateshead. Now, the building itself is pretty special and overlooks the River Tyne and the centre of Newcastle with heap of shows and workshops to try. 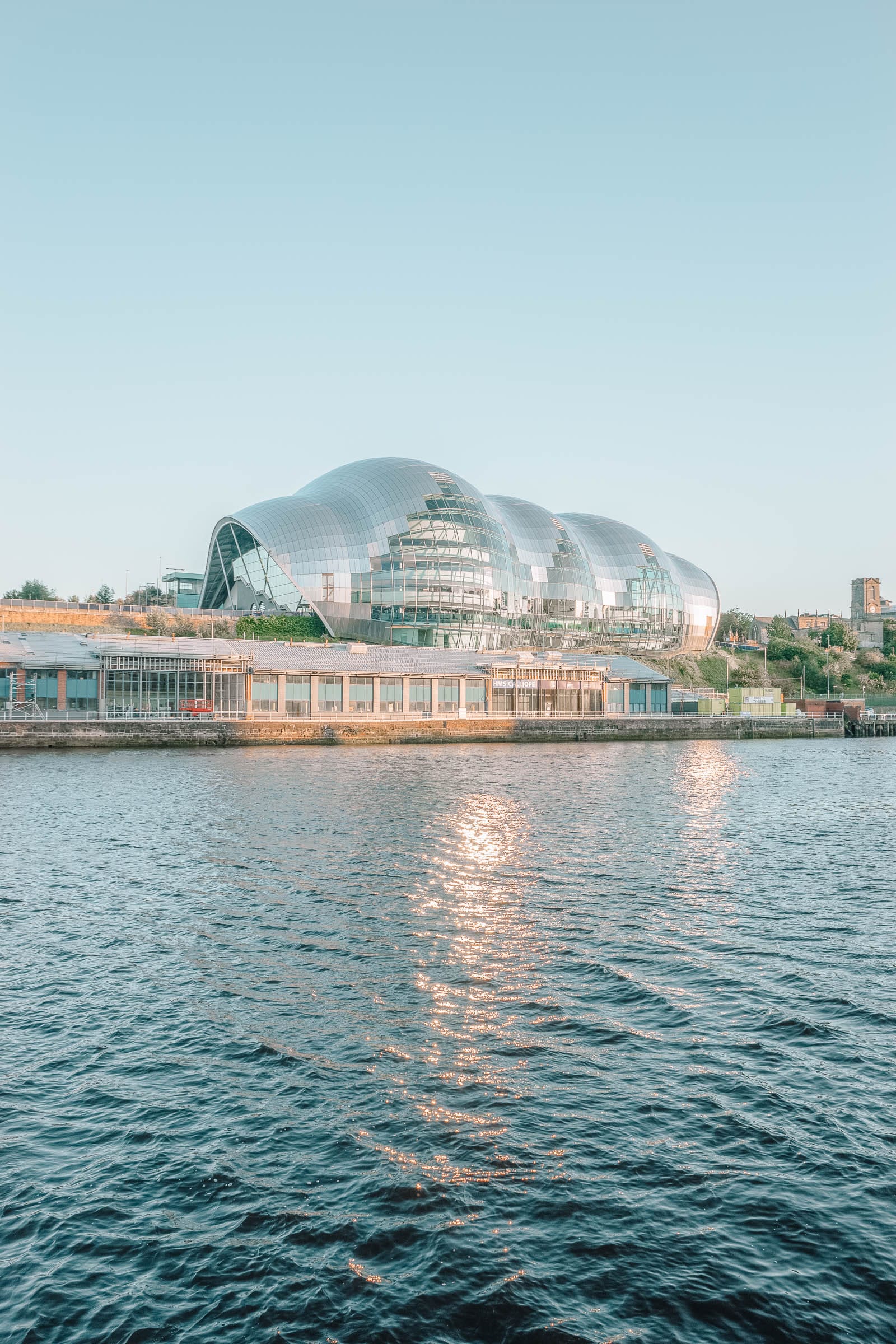 Take a look at the seasonal shows and watch join in with some of the events at the Sage.

The 19 Prettiest And Best Places To Visit In England

10 Best Places To Ski Around The World

16 Best Things To Do In Copenhagen 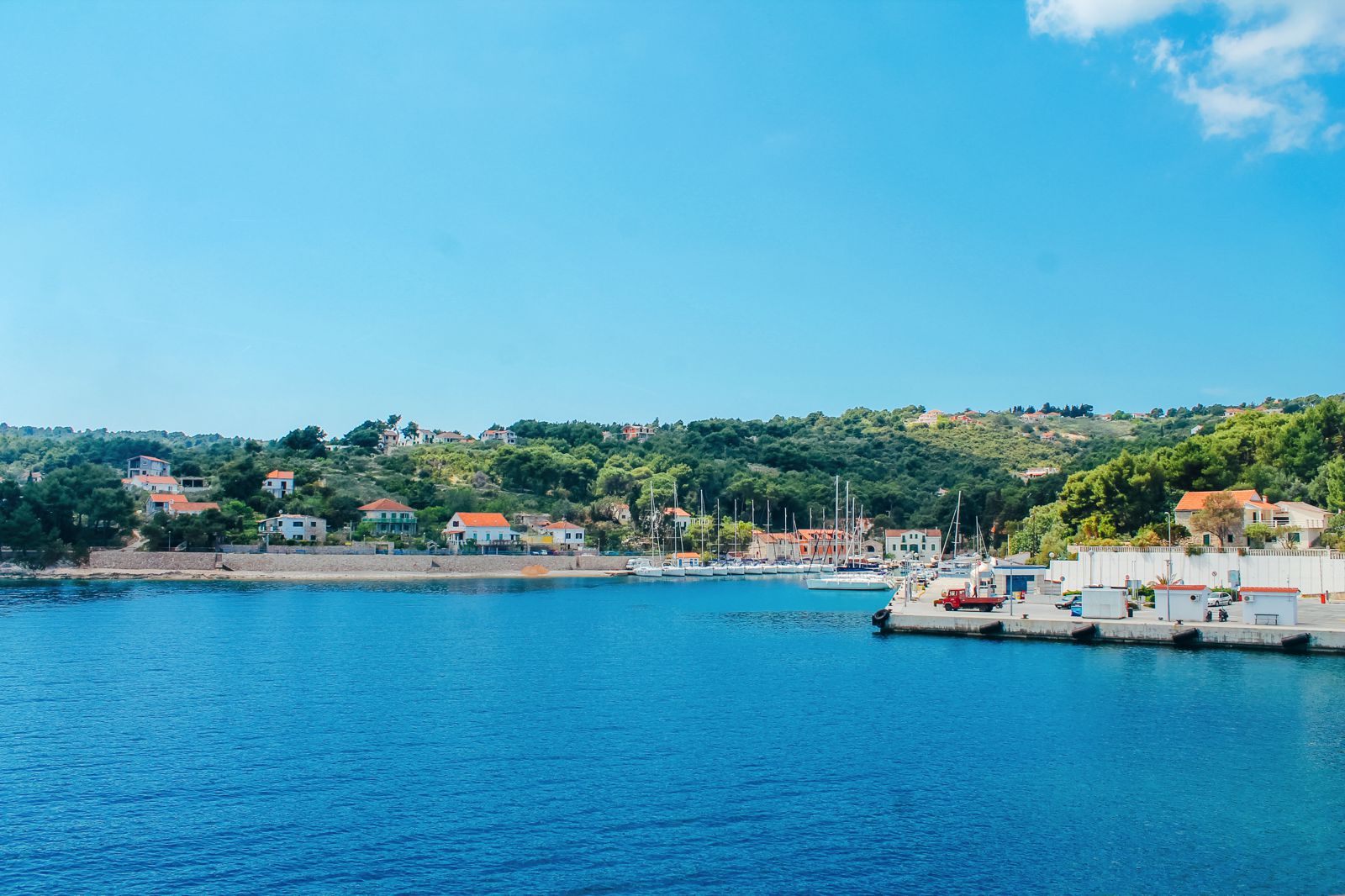 These Are The Many Reasons You’ll Fall In Love With Solta Island In Croatia! 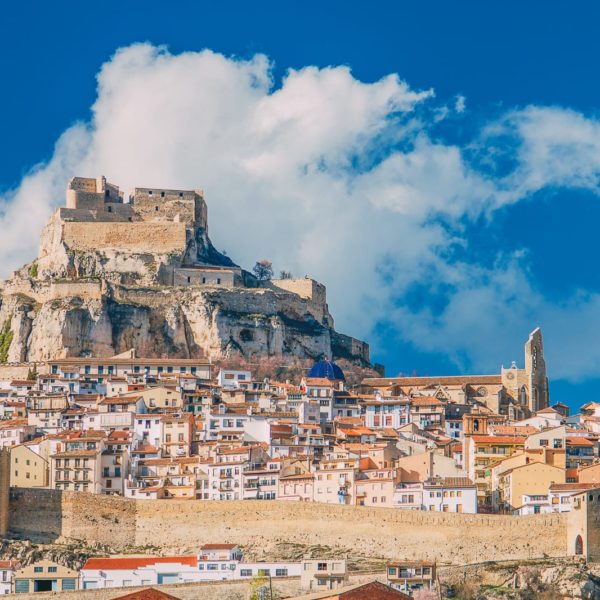 14 Beautiful Places To Visit In Spain 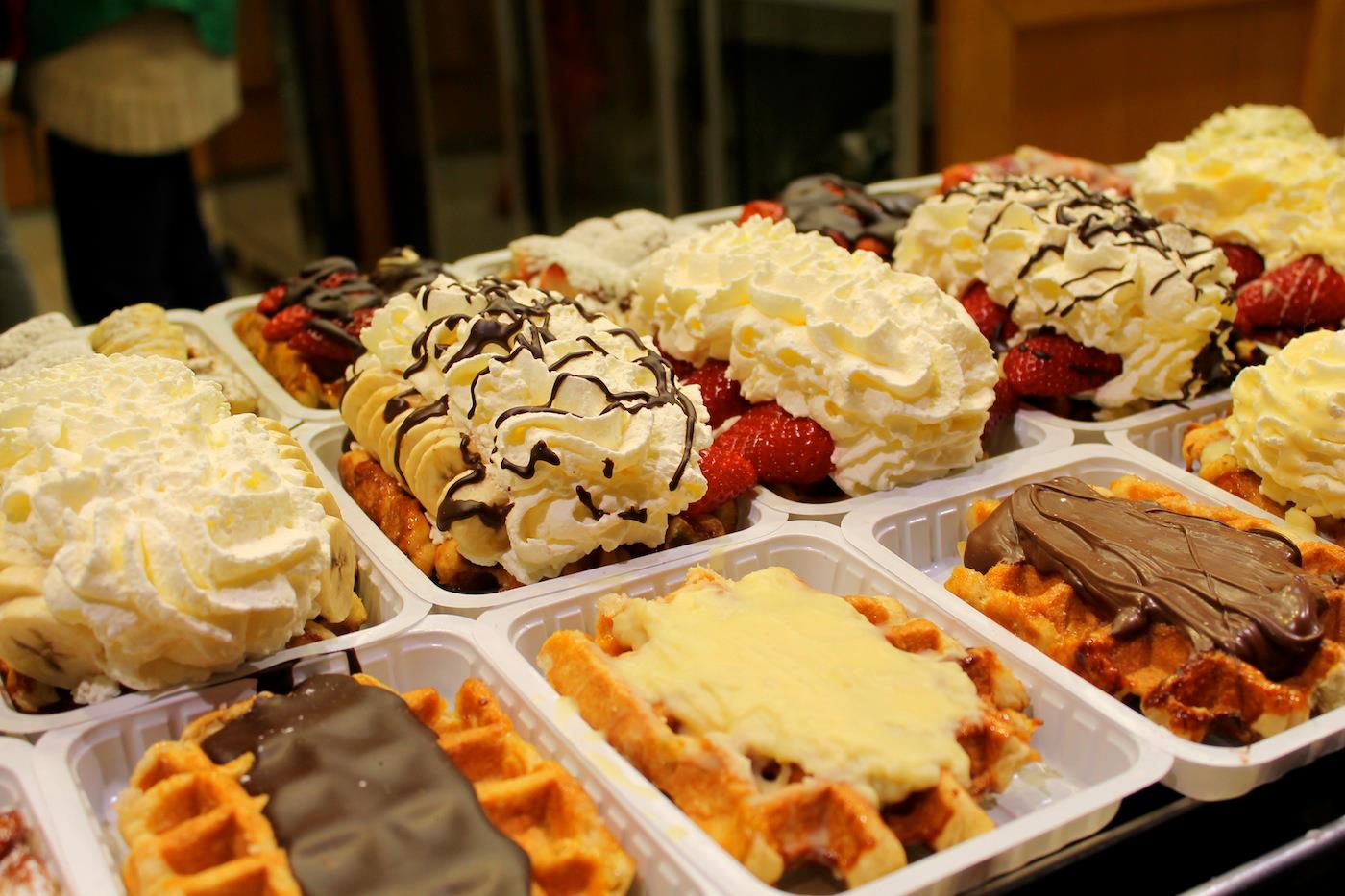 In The Search Of Warmth and Waffles – The First Few Hours In Brussels.